How to Craft Cell Phone Terraria(Step by Step Guide) 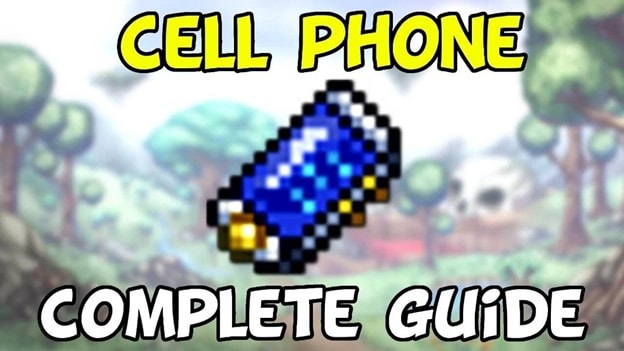 Cell Phones are unique in their ability to display information, making them a valuable tool. Find out how to make your own in Terraria! A mission in Terraria involves crafting the Cell Phone. Putting this item together is very challenging since it requires a lot of different accessories, which are all combined at Tinkerer's Workshop. After defeating Skeletron, in theory, you should have access to everything you need. However, you may have to wait much longer before having all the different parts in reality.

Terraria's developers noted this trend. It features a supremely useful item called the Cell Phone, a literal representation of the real-world mobile phone despite not looking like a real one.

Although a Cell Phone is not without its drawbacks, it is unequaled when it comes to displaying information about the world and for allowing quick and easy travel. Unlike real life, gamers in this game will have to craft one of these complex and useful devices. This is probably the most complicated crafting recipe in this game.

if you want to Craft Cell Phone Terraria, then follow the steps given below:

It takes 13 separate devices to assemble the final components of a Cell Phone, which must be combined in specific pairings. You'll also need to craft (or find) each of these devices yourself. That means you'll be spending a lot of time gathering resources and getting to work at the workbench. Even though this is a lengthy process, there is a good reason for the long timeline as each of the devices needed to construct the Cell Phone has a function that the in-game smartphone combines.

You can craft this meter from 10 Copper Bars, 8 Silver Bars, and 6 Gold Bars to gauge how deep you are.

It is also necessary to find this device because it cannot be crafted. A Radar can be looted from the following types of containers.

This device, which keeps track of an individual's kill count, can only be found by maneuvering through the world and killing mobs. All of these enemies can drop the item in the Dungeon area.

The Lifeform Analyzer is a handy tool that gives one information on encountered enemies, though it cannot be crafted or dropped as a drop and must be purchased from the Traveling Merchant for five gold coins.

Despite the fact that this is the Traveling Merchant's last device, you can only buy it once for five gold coins. It is a good idea to pick up a DPS Meter early on since it displays information on how effective various weapons can be.

Since they seem to have a monopoly on many items needed to make Cell Phones, it seems the Traveling Merchant knows how to make them. Visit this salesperson to buy a gold coin Stopwatch, which tracks the player's movement speed.

Although the enemies that possess cell phone components from this aid for treasure seekers tend to drop them at a higher rate, it can be difficult to locate them.

This item will display one's fishing power, but it will require quite a bit of angling to obtain. The chance of getting one of these guides increases by 3.33% (PC & Mobile) and 2.5% (Console) every time the player completes a fishing quest for the Angler.

As with the Fisherman's Pocket Guide, players have a chance to get a Weather Radio from an Angler by completing fishing quests for them. The Weather Radio displays the weather and wind speed.

It is also possible that the Angler is one of the people looking to profit from people seeking a Cell Phone, as they also possess the Sextant, a vital item for crafting the superb in-game smartphone and tracking the phases of the moon. Anglers are just as likely to receive one following their fishing quests as they are to receive the Fisherman's Pocket Guide and the Weather Radio.

Players must find a rare item and combine all of the devices found in Step #1 into the next tier of accessories for the recipe to advance.

GPS records both the player's location and the time, similar to the real-world equivalent, and can be crafted by combining a Gold Watch (or Platinum Watch), Depth Meter, and Compass.

Radar, Lifeform Analyzer, and Tally Counter are all craftable components that can be combined into this accessory.

The Goblin Tech device actually enhances the functions of its components, performing all the usual functions while also delivering a few more bits of information. It can be made by combining the Stopwatch, DPS Meter, and Metal Detector.

Fisherman's Pocket Guide, Weather Radio, and Sextant can all be combined to create the Fish Finder, an accessory fashioned from some lower-tier devices. 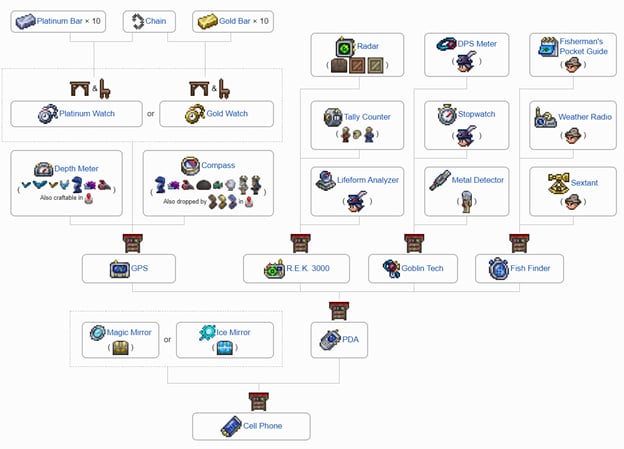