What Is Blood Moon Terraria? How to Survive? 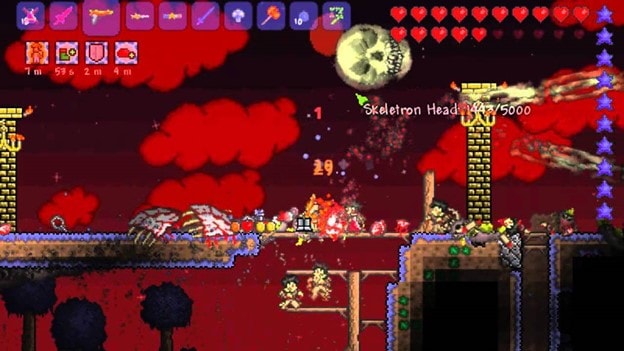 Are you experiencing strange occurrences when playing Terraria every day? Terraria's day cycle went smoothly, as any other day cycle would before night fell, and everything turned red. There is a blood moon rising in the sky, which bathes the area in red light and creates an eerie atmosphere. Blood Moon received some changes in the 1.4 update, so you might now know something different than you did before. Here is what you need to know about the Blood Moon and what it means to you.

Blood Moon Terraria: When Do They Occur?

A Blood Moon can only occur if two criteria are met.

A Blood Moon will occur on a given night if both of these conditions are met. In addition, it is relatively easy for players to know when it starts because they get a notification that "The Blood Moon is rising."

To force a Blood Moon, you must consume a Blood Tear, which is dropped by various enemies during Blood Moons. Listed below are the enemies to kill for a chance at a Blood Tear, as well as their percentage likelihood of dropping it.

What Happens During Blood Moon Terraria?

The amount of enemies that spawn during the event is dramatically increased compared to the regular amount. In addition, the maximum number of monsters that can spawn simultaneously is also greatly increased, which leads to a situation where players are constantly surrounded by monsters at all times.

In addition to morphing otherwise non-violent creatures into dangerous ones, the Blood Moon's influence also generates new threats for the player to confront. Moreover, NPCs living in your home cease to be able to decrease enemy spawn rates, making your backyard a place where monsters constantly appear.

To make things even worse, zombies now also have the ability to open doors. As a result, this is perhaps the most dangerous hazard during this event since it is able to make your own house an unsafe place to live for you and your NPC friends.

Below given are some other interesting facts that you need to know about the Blood Moon.

How To Survive The Blood Moon?

The best thing that we can recommend that players do if they are ill-equipped or aren't sure about their ability to handle a horde of hundreds of enemies is to break down their home's doors and replace them with any other building material.

It is safe to hide inside your house at night when you don't have any doors, as they can't be opened. Terraria isn't a game where you should ignore the fact that you are ill-prepared for a dangerous situation; this will also save you gold and items from all the times you would have died.

You will be adequately rewarded for your efforts if you do decide to take your chances outside.

Ensure that the NPCs inside your house are safe by properly boarded up. Simple. All you need to do is make sure you have some basic defenses in places, such as dirt walls and trap pits.

When you go hunting, bring a lot of healing items with you, and do not forget to restock often. Rather than becoming overconfident and losing progress, it is always better to be cautious. During this event, you can obtain useful items from enemies, but only by using a Fishing Pole can you get the best of these items.

When fishing under a Blood Moon, some callous enemies can spawn, and these, in turn, drop perfect loot upon death.

To keep an eye out for, here are some key monsters:

There's also a chance to catch the Advanced Combat Techniques book while fishing. The NPCs' damage dealt by friendly NPCs will be increased by 20% for one world and their defense by six points for all worlds. Just this item makes it worthwhile to battle through the Blood Moon.

So, this was our guide about blood moon terraria. If you want to survive the blood moon and want to take full advantage of it, then it will be very helpful for you. Make sure you prepare properly to get better rewards during the blood moon. Without preparation, the only chance of surviving is by staying inside.