Best MP4 to MP3 Apps for iOS and Android Devices

Most Smartphones capture videos in the MP4 file format that is compatible with nearly all video editing apps and media players. In addition, iPhones and Android phones are also equipped with microphones that enable you to record sound alongside the video. Storing all the videos you create on your phone’s SD card can be difficult, as a single MP4 file can easily occupy more than a gigabyte of storage space. Converting an MP4 file into MP3 is a great way of conserving space on your memory card if you only want to save its audio. So, in this article, we are going to take you through some of the best MP4 to MP3 apps for iOS and Android devices.

Recording videos in high resolution is no longer a far-fetched dream because there are quite a few models on the market capable of producing crispy-sharp images. Converting a video file into an audio file doesn’t require too much effort because there are quite a few third-party apps that let you accomplish this task in just a few moments. Here are some of the best MP4 to MP3 apps for Android devices. 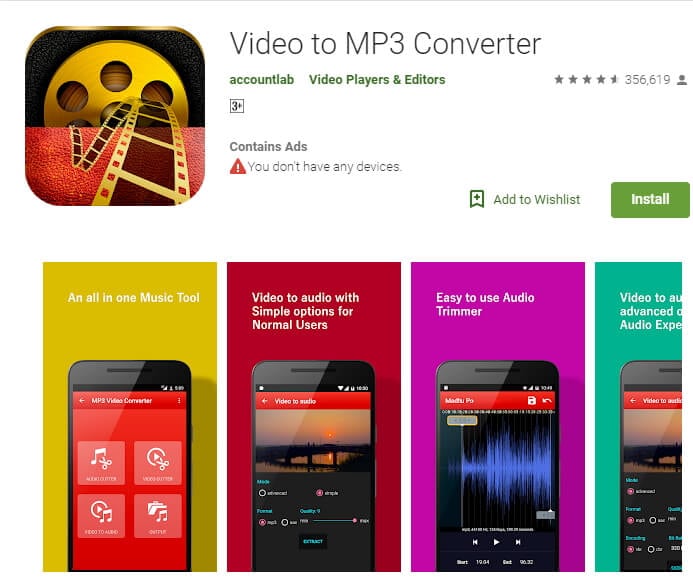 Extracting audio from video is just one out of many functionalities this app offers. Video to MP3 Converter features both Simple and Advanced MP3 conversion modes so that you can have complete control over the audio extraction process. The app provides support for MP4, WMW or AVI video file formats among numerous others, while its Video Cutter tool enables you to remove all segments of a video clip you don’t want others to see. Video to MP3 converter also features the audio cutting tool that lets you create a new ringtone for your phone effortlessly. You can also control the bitrate of the audio files you’re making because the app lets you generate files with bitrates that vary from just 48 kb/s to 320 kb/s. 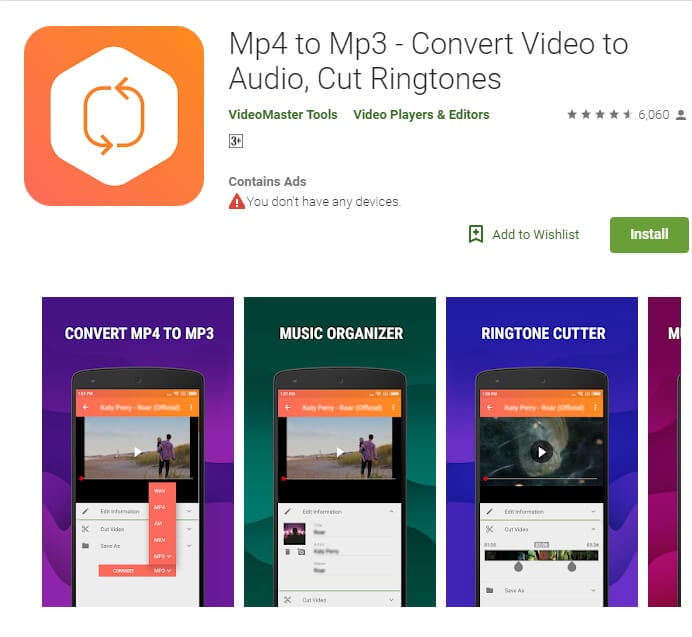 Converting MP4, AVI or MKV video files into MP3s is a fun and easy process. In addition, this app lets you add metadata to each new MP3 file you create which makes organizing huge music libraries painless. What’s more, this MP4 to MP3 converter allows you to cut both audio and video files which makes it a perfect tool for making unique ringtones. The batch conversion feature enables you to convert multiple MP4 files into MP3s at the same time. Even though the MP4 to MP3 app is free, getting rid of ads currently isn’t possible. 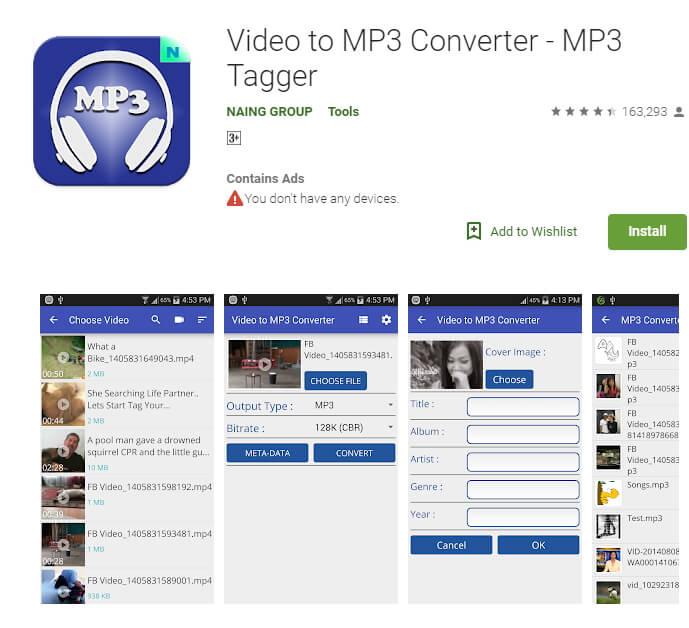 Video to MP3 Converter is compatible with all devices running on Android 4.0 or later versions of the OS. You can use it to convert all video files on your phone to audio files, in just a few steps. Simply pick a video you’d like to convert, choose between MP3 and AAC output formats, add the metadata like the name of the artist or the song’s title, specify the preferred bitrate and tap on the Convert button. After the conversion, you can merge multiple MP3s into a single audio file, but unfortunately, you won’t be able to convert several video files simultaneously.

This is a simple and powerful file conversion tool that lets you convert video files saved in formats like MP4, 3GP or FlV to MP3 or AAC audio files. Selecting a bitrate of the output file or adding the title of a song and an album won’t take too much of your time. However, the MP3 Video Converter doesn’t offer audio or video editing tools, so you can’t cut or merge several audio files together. What’s more, your device needs ARMv7 in order to run this app, which means that you won’t be able to use it on older models of Android phones. 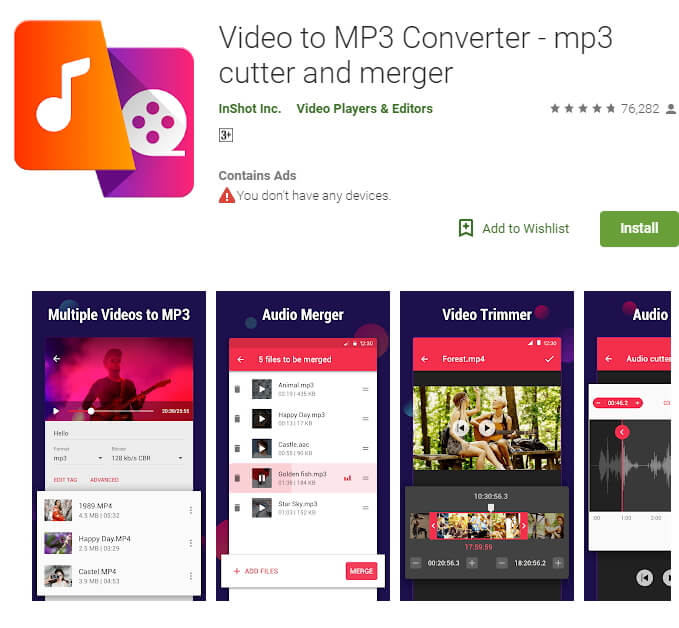 Android users in need of a fast and efficient app that is capable of much more than converting MP4 files to MP3s should look no further. This app provides support for nearly all popular video file formats, which means that you can convert video files regardless of the format in which they are saved. It also offers several different output formats enabling you to choose the one that is the best fit your demands. In addition Video to MP3 Converter lets you convert up to 15 video files to MP3 simultaneously and it grants you access to both Audio and Video Cutter tools.

Best MP4 to MP3 Apps for iPhones and iPad

Selecting an MP4 to MP3 app for iPhone can be a bit complicated because there are so many apps to choose from. We’ve narrowed down the selection to just five apps in order to make the selection process easier for you, so let's take a look at some of the best MP4 to MP3 apps you can find at the App Store. 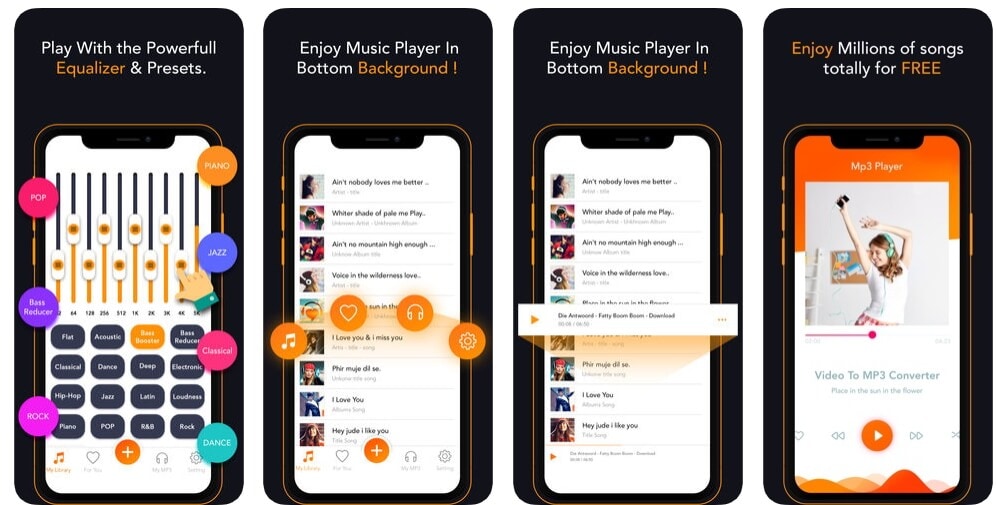 Converting an MP4 file from your video library into a high-quality MP3 audio file with this app is a simple 3-step process. You just have to tap on the + button, select a file you want to convert and hit the Convert button. You can also specify the time intervals at which you would like the file conversions to take place and create MP3 files without any quality loss. The app supports all frequently used video file formats, so you can convert videos that are saved in a broad range of formats. As its name indicates, Video to MP3 Music Player lets you play music, and it also enables you to share MP3 files to WhatsApp, Messenger, and other apps. 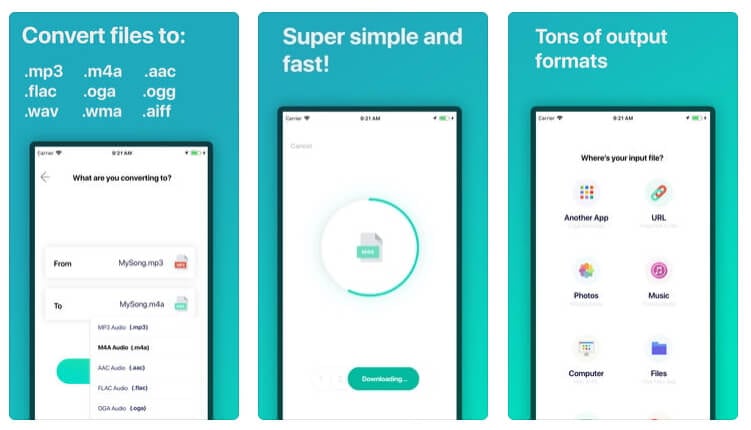 The Audio Converter app lets you convert both video and audio files to a broad range of audio file formats. You can convert MP4, m4v, amr, MPEG files formats among numerous others to MP3, FLAC, AAC, WAV, OGG, and other audio file formats. All conversions take place on a cloud server, which means that you can’t use The Audio Converter while your iPhone is offline. Keep in mind that the free version of the app offers only limited functionalities and you must purchase either Premium Pass or Lifetime Pass if you want to use it to convert MP4 to MP3 on a constant basis. 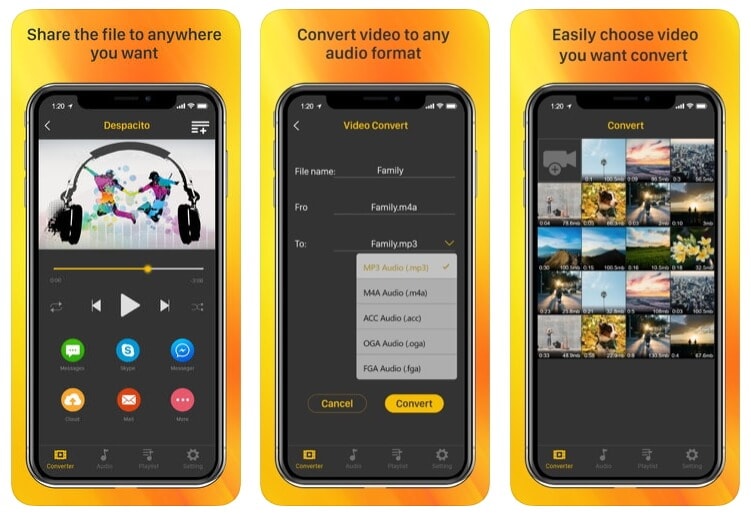 iPhone owners in need of an app that can convert MP4 to MP3 in fifteen seconds should consider installing this app on their devices. You can convert all videos stored on your phone’s camera roll or you can import a video from Dropbox, One Drive, iCloud and other online file hosting platforms. Video to MP3 – Convert Audio lets you set the starting and ending points of the new audio file, which means that you can convert only a portion of an MP4 video file to MP3. All videos you convert to MP3 can be shared on social media or messaging apps and you can transfer all converted files to a computer using the iTunes File Sharing feature. 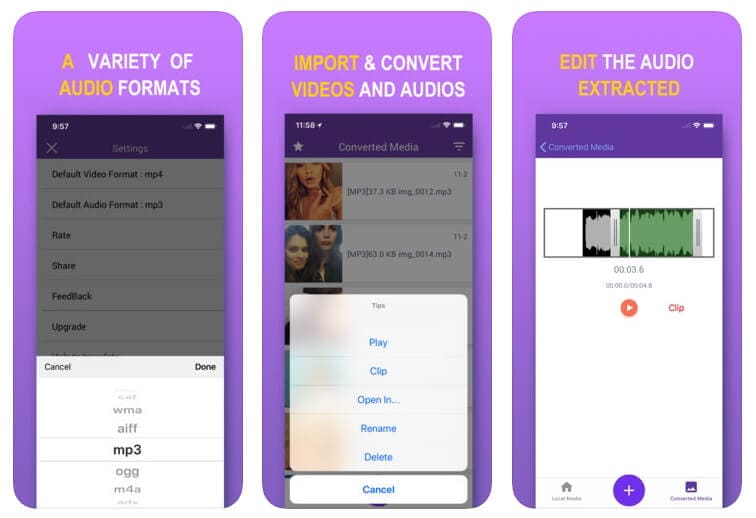 Converting a video saved on your phone’s camera roll to MP3 with the MP3 Converter – Audio Extractor requires you to just select a file and start the conversion process. You won’t even have to specify the output format, because MP3 is the app’s default output format. After the conversion, you can listen to the file you created to make sure that its quality is at a satisfying level. However, you won’t have any control over the bitrate of the output file or any other settings that can increase the quality of the MP3 you’re generating. Moreover, the app offers only modest file-sharing options, and you have to make an in-app purchase if you want to gain access to all features the MP3 Converter – Audio Extractor has to offer. 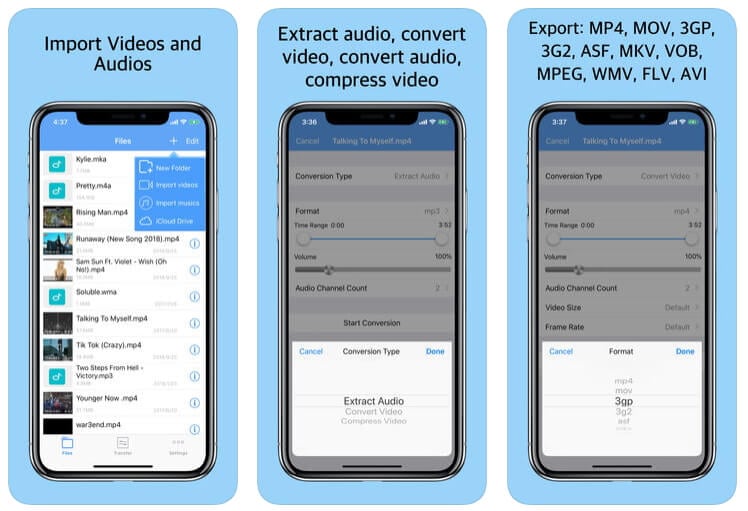 Besides extracting audio from video, you can use the app’s built-in media player to watch videos or listen to music. Media Converter – Video to MP3 supports a broad range of input file formats and it lets you convert them to MP3, M4A, WAV, and other audio file formats. This app lacks more advanced MP4 to MP3 file conversion options since you can’t select the preferred bitrate of the output files or add tags to them. The app contains ads, and you must make an in-app purchase in order to remove them. Even the Pro version of the Media Converter – Video to MP3 doesn’t offer the file-sharing options.

Tools to Convert YouTube to MP3 for Your iPhone>>

Each of the apps we featured in the article makes creating impressive audio libraries from the videos you record with your iPhone or Android phone look easy. However, since the number of file conversion tools these apps offer can vary, choosing an MP4 to MP3 app is a bit more complicated.

If you get a PC or Mac on your hand, It would be easier to make it on them. With Filmora, within a few seconds, you're good to go.

Thank you for your comment. We will review it within few days.
You May Also Like
MP4 2 MP3: Best MP4 to MP3 Converters

Converting MP4 video file to an MP3 file format is a simple process. Read on if you would like to learn more about the best MP4 to MP3 converters you can use online or on PC and Mac computers.

In case you were looking for a quick way to mix together several MP3 files, you’ve come to the right place because in this article we are going to take you through some of the best online platforms th

Free MP3 downloader is important for us on Android phone. If you want to learn which are the 8 best free tools, come check it.