Top 5 Tips to Freeze-frame in After Effects

Top 5 Tips to Freeze Frame in After Effects

After Effects (AE) does not require any introduction as it is one of the most preferred video editing tools for commercial and professional purposes. However, this editing software is a bit complex for beginners. A freeze-frame is basically for holding the video on a single frame for an extended period. When it comes to clip editing, Adobe After Effects is a tool that no one can miss as it has plenty of editing tools and features that other tools do not have. In addition, AE offers a layer-based editing tool that provides the most professional way to edit videos, whereby users can add transition, multiple layers, effects, audio, etc., at the same instant. 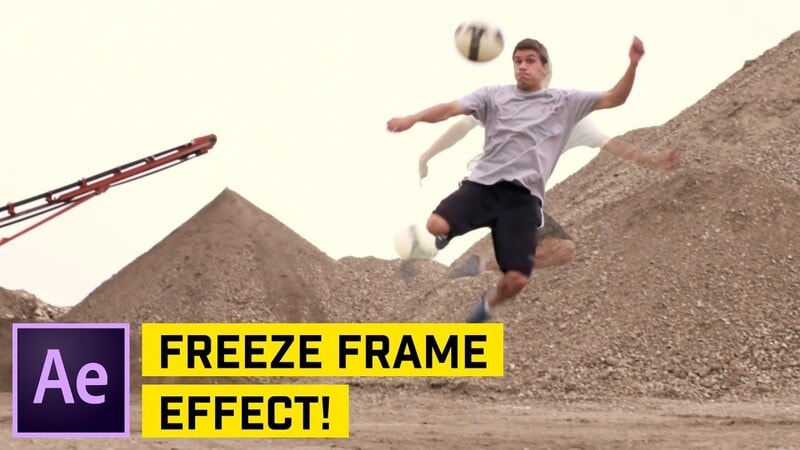 Among many other features, one of the essential features of AE that we will talk about is a freeze-frame. Now the question is, what is freeze-frame? The freeze-frame stops or freezes stop the specific frame that users should focus on or feature. Simply, select or pick the frame required to be frozen and follow the steps to freeze the frame of their choice. This article will explain how you can frame hold in After Effects by following a few simple steps.

Part 1 How to Freeze-frame in After Effects

First, make sure you have the AE composition open, and the video clip added. Next is to find the point where you want the video to "pause" or freeze by moving the time position indicator on the timeline.

Next, select the layer and then right-click on the layer to find Time in the menu that appears, and under Time find Freeze-frame and click it. Once done, the entire layer will get stuck on that frame. 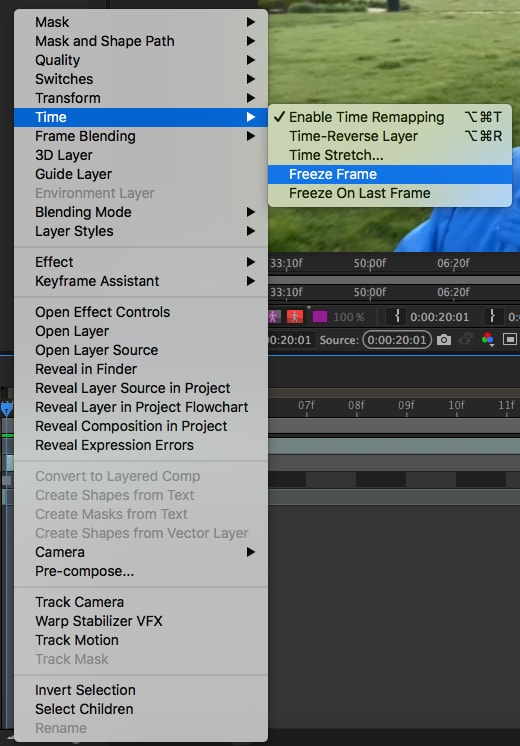 Next, hit the plus (+) sign a few times to zoom into the timeline, move forward one frame, select the new layer, the one on top, and split the layer again using the keyboard shortcut, and now have three layers.

Finally, export and save it on your device when you are satisfied with the result.

Thus, you successfully used the After Effects Freeze Frame to bring cinematic effects to your video.

Part 2 FAQs on Freeze Effect on After Effects

Now, let us view some common FAQs that may come across while using After Effects frame hold.

● What does freeze do in After Effects?

With After Effects holding the last frame (freeze-frame), you can instantly add multiple layers, effects, transitions, audio, and other media. In addition, the freeze-frame in After Effect pauses or stops the specific frame that you want to feature or focus.

● Why can't I freeze-frame in After Effects?

The reason you cannot freeze-frame in After Effect could be a result of the greyed-out features. With this grey-out feature, a freeze-frame cannot be created or added from a sequence, as you will be required to go back to the original clip to create a freeze-frame or any other type of Effect.

● How do you Freeze the current frame for the duration of the layer in After Effects 2020?

● First, in the Composition or the Timeline panel, pick the layer.

● Place the current-time indicator on the frame that you want to freeze.

Part 3 Compared with Filmora, What Are the Advantages of Freeze-frame After Effects?

A freeze-frame can be any frame from a video clip you would like to turn into an After Effects still frame or still image. Another perfect way to explain a freeze-frame called a still image is that it is like pressing the pause button on remote control, making a statue, or taking a photo.

Other Advantages of Freeze-frame in Adobe After Effect is that:

● The images can be worked upon quickly without discussion or rehearsed and planned.

● They are instrumental as an immediate way of communicating ideas or telling a story.

● They can be valuable to represent people or objects and even abstract concepts like emotions or atmospheres.

● As there are no lines to learn, frame hold in After Effects can help shyer performers to gain confidence.

More so, with the Filmora Video Editor, you can freeze a frame of your video clip, and it also allows users to set the duration of the freeze automatically.

Other Advantages of Freeze-frame in Filmora are that:

● Freeze Frame in Filmora has made the editing tasks more flexible and accessible.

● It makes the video more appealing and exciting.

● It helps extend the duration of any point in the video and makes it more focused.

In short, Adobe After Effects is a much better instrument for professionals due to its extensive range of features. However, it can seem complex for newbies. Thus, if you are new to video editing and freeze frames on After Effects, we suggest you go for Filmora first to get yourself acquainted.

● Thus, this report recommends Filmora as an essential alternative to After Effect in using freeze-frame as Filmora allows work with ease.

● We added a list of FAQs on the After Effects freeze-frame.