How to Calculate Pixel Calculator Ratio

Let's learn interestingly about the pixel calculator ratios and dive into their vast significance for UI/UX design!

How to Calculate Pixel Calculator Ratio

Size, formats, and resolution… What are pixels exactly doing with it? 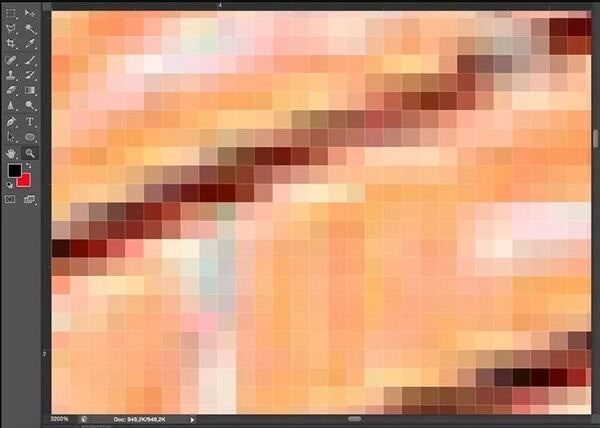 So let's review some basics on pixel calculator ratio to create an easy life, your workflow more productive, and your photos of the ideal size for the intended purpose.

Part 1 What is Pixel Aspect Ratio?

A digital image is not a single non-dividable thing. You’ll see that your photo is like a mosaic formed by small tiles if you zoom in far enough, which are known as pixels in photography.

The amount of these pixels and the way they are divided are the two elements that you’re required to take into account to know more about the resolution and pixel calculator ratio.

The Pixel Aspect Ratio is simply the latest way of defining the length of one side of a pixel in context to the length of the other.

Let's say the ratio is 1:1; each side of the pixel is the same length as the other, also known as a square in pixels.

If the ratio is 2:1, it means that one side is twice the length of the other.

NOTE:  The 'Aspect Ratio' does not define the actual or exact length of the side of a pixel is, just its "relative" size of one side to the other.  The actual length will depend on how much you shrink or stretch a photo when recreating it.  But if the Pixel Calculator Ratio is 1:1, then the pixels will always be square irrespective of the size of that particular photo. 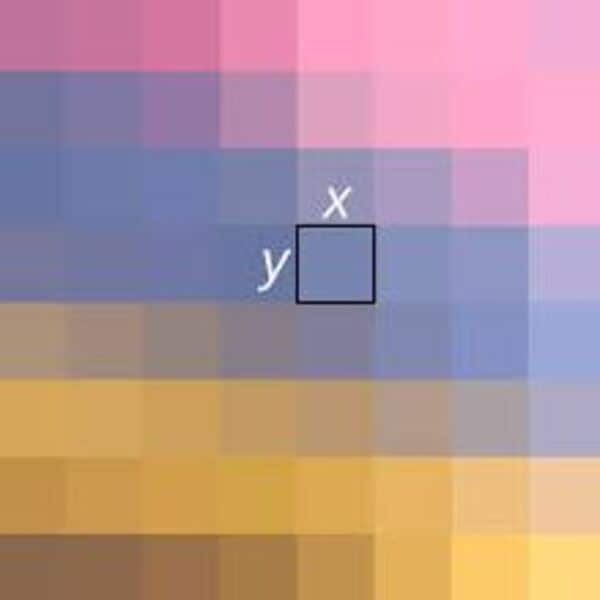 Part 2 How is Pixel Ratio Calculated?

You can use a pixel ratio calculator to calculate the pixels within a screen. So, we'd like to suggest a calculator by xwebtools.com. 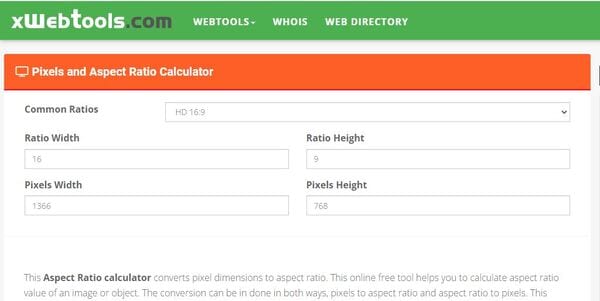 This pixel ratio calculator converts pixel dimensions to aspect ratios. It is an online free tool that assists you in calculating the aspect ratio value of an object or a photo.

You need to provide Ratio Height and Ratio Width to calculate pixel resolutions. Both the Pixels Width and Height will get automatically calculated.

As we already discussed, an aspect ratio defines width to height. The still picture and video frames have a frame aspect ratio. The pixels that create the frame have a pixel aspect ratio (sometimes called PAR).

Different video recording standards have different aspect ratios. For instance, you record video for television in either a 16:9 or a 4:3 frame aspect ratio.

You set the frame and pixel aspect when you create a project in Adobe Premiere Pro. Once you set these ratios, you can't change them for that project. However, you can edit the aspect ratio of a sequence. You can also use assets made with different aspect ratios in the project.

If an asset still feels distorted, you can manually mention its pixel aspect ratio. But that isn't very clear, especially for a beginner. This is why we recommend doing the following. 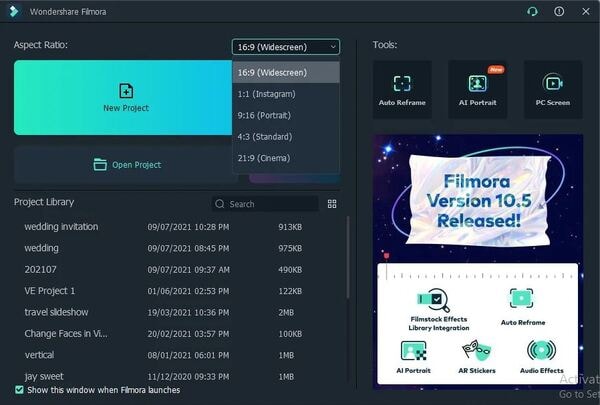 Method 2: You can change the aspect ratio under Project Settings 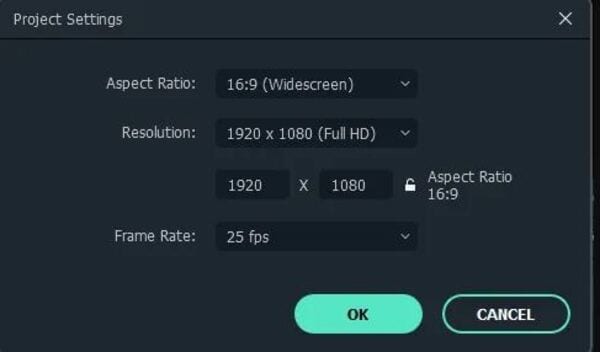 Method 3: Change the aspect ratio of video with Auto-Reframe 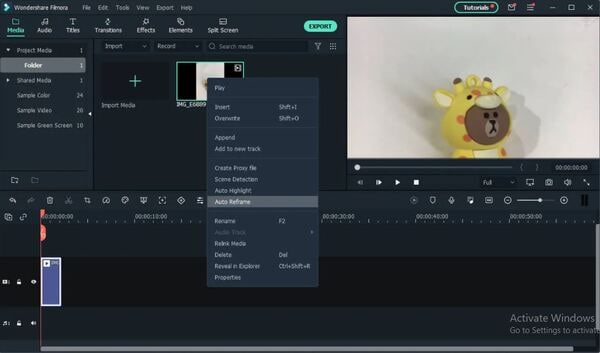 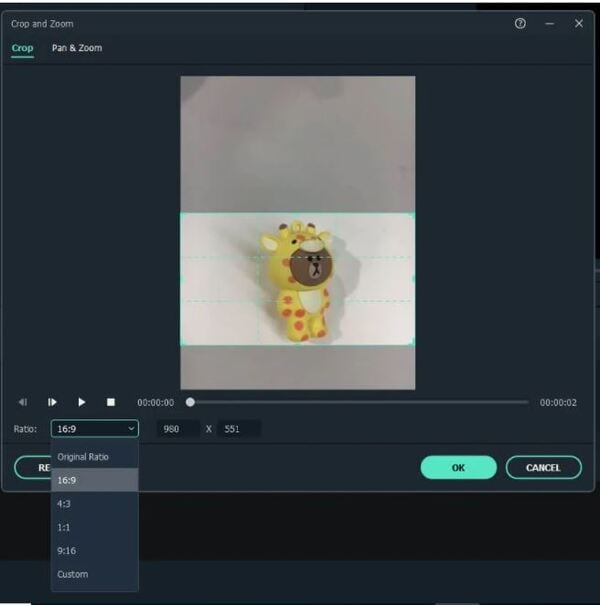 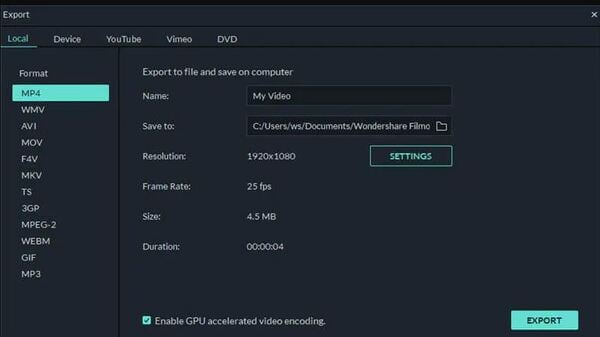 Thus, using the Wondershare Filmora along with the pixel ratio calculator makes a difference!

Although the image aspect ratio comes from its width and height, it also contains multiple subsets that help to define image proportions properly.

But sometimes, specific images are optimized for certain types of displays. And, they have rectangular pixels with an aspect ratio of 4:3 or similar.

The display aspect ratio (DAR) is the designers' most frequent aspect ratio and gets generally synced with the general term.

As the name suggests, the display aspect ratio refers to the proportions of an image as it appears on different screens out there.

Some devices, such as televisions and cameras, have a fixed DAR for images to display nicely on these devices.

They need optimization for their specific or respective aspect ratio. For instance, a typical display aspect ratio for the widescreen video on a television screen or monitor screen is 16:9.

They appear distorted when images with different aspect ratios are presented on these devices.  Digital SLR camera sensors also consist of a fixed display aspect ratio, which controls how pictures captured by the camera will be displayed and saved.

Storage aspect ratio, commonly known as (SAR) is an aspect ratio formula that concerns specifically to encoded digital video files. SAR refers to the height and the width relationship in video frame size, and it is required to be consistent among all individual frames.

Aspect ratios play a vital part in any project that consists of displaying and capturing photographs, videos, or other image-based files in an ideal manner. The camera's fixed aspect ratio can considerably impact, especially for photographers.

And for videographers or anyone working with slideshows, animations, and other motion projects, the aspect ratio is a prominent element for correct display on mobile devices and widescreen.

But even in the environment of responsive web design, problems can arise, such as when an image is not adjustable for display without compromising its quality or content.

A small example is when you need a square image with a 1:1 aspect ratio to insert into a rectangular box on a web page. To accommodate varying image size requirements, proportions and size may need adjustment.

In an increasingly picture-driven digital world, videos and images that look even slightly out of the way add to a visitor's negative impression of a site. Besides those forced into the wrong configurations can even interfere with a site's usability.

Poorly proportioned user guide or product images video that's too stretched to check clearly can affect both a visitor's want and their ability to use the site. Developers, designers, and anyone working with images will need to know how aspect ratios work and manipulate them for the best visual effect.

Various pixel calculator ratios, both paid and free, have popped up on the web to streamline the process.

● An overview of pixels

● Different pixel ratios and their impact on UI/UX design

Are you looking for ideas for funny YouTube videos? Your search is over. Read the article below and get the most information regarding funny videos. You will also get to know about the best funny video background music.

How Can You Create Outstanding Educational Teaching Videos?

Are you a teacher? Are you looking for educational background music? This article has everything you will need to know for creating outstanding educational teaching videos.

The article shall offer an overview to create a promising sports intro and edit a YouTube outro for a sports channel. There will also be three recommended apps to download background music for exercise.

How to Create Cinematic Style Videos?

The article introduces three recommended apps to download royalty-free cinematic music and covers an extensive procedure to create a cinematic travel intro for a travel vlog.

How to Create Cooking Video Intro and Outro for YouTube Channel?

Using this article as a reference, the users would create a café meal intro and YouTube end screen while knowing multiple ways to download cooking background music.

How to DIY VHS Overlay in After Effects?

If you want to add an effect like a VHS overlay free effect to enhance your videos, you can do it on After Effects. Read more to learn how!

Do you know there are websites to download free glitch transition effects for Premiere Pro? You can easily download them and make awesome videos.