How Does YouTube Count Views? It's Not as Simple as You Think!

How does YouTube count views? It’s not as simple as the number of clicks your video gets. If someone sits and refreshes your video over and over without letting it play for any significant time, those refreshes won’t be recorded as views. There is a lot more that goes into the calculation.

After you have created your YouTube channel, do you want to edit videos and upload your first video? Here we recommend using Filmora to easily edit YouTube videos.

You can use Filmora to make YouTube videos with built-in royalty-free audio. Filmora also can help you make YouTube intros. It includes more than 500 templates, transitions, effects, and text resources.

1. Not Everyone Who Clicks Adds to Your View Count

YouTube doesn’t provide a clear definition of what counts as a view, but we know that someone clicks on your video, and clicking right away doesn’t count. That’s how we know that watch time is a factor. Some studies conclude that a full 30 seconds need to be viewed to register as one view, but there is no way to know for sure. 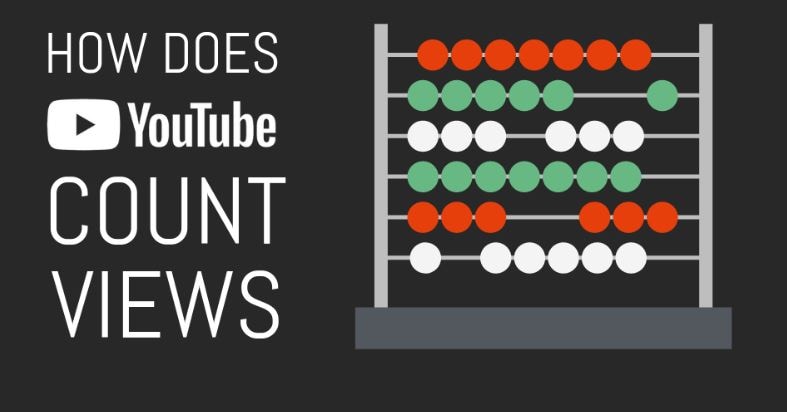 YouTube wants to be sure that views are coming from humans and not bots. So, during the first couple of hours after you publish a video, YouTube seems to be stricter about what they count. The views which are counted are the ones that YouTube believes to be legitimate. Sometimes, it ends up skipping legitimate views for the sake of discretion.

Once this window of time passes, it is likely that you will see the view counter start to update a lot more frequently. The counter could still revert to updating slower and more hesitantly, though, if YouTube’s algorithm thinks it’s detecting something fishy.

At times, your view count can even be frozen temporarily until the algorithm can validate the views you are receiving. This is done to ensure a fair and positive experience for everyone who creates content. View counts can be adjusted by the algorithm in either direction.

Termed by many as one of the most boggling algorithms of all time, it is really hard to decode the complete dynamics of the YouTube view count algorithm.

There are some tests you can run yourself to try to unpack it.

If you upload a video and then set it as unlisted it won’t get any public views so you can experiment by doing things like watching for different lengths of time and seeing what gets counted.

You’ll have to use a computer in a different location and make sure the account is not the same as the one you used to upload the video. Now, you need to watch the video for roughly 15 seconds. The key here is to keep it less than 30 seconds. You will see that the view did not add to the count. If you repeat this process on multiple computers at varying locations and with different accounts and you are likely to find the same result.

However, if you watch it for 30 seconds or longer it is likely that the count will go up.

We are adding ‘likely’ here because, despite this 30-second rule which has been decoded, there are other factors that might contribute to whether a view is counted as well as other automated scanning techniques at play.

Try to watch the same video numerous times in a single day. You will find that the count will add up at first, but after some time it will stop. YouTube knows that a lot of times people replay some videos over and over when they really enjoy them, and so they want to factor replays into their algorithm because they suggest quality. However, to avoid spam views, the counter will stop after a certain point.

Something else that can affect whether a view is counted is the behavior of the account which watches it prior to landing on your video’s watch page. Sometimes, YouTube might feel that there is an increased chance a particular account is actually a bot, and then views from that account might not be added.

One way that YouTube might flag an account as a potential bot is if it is jumping between videos directly without navigating through recommendations, the search engine, or the account’s subscriber feed (how are they getting between these watch page URLs if they aren’t clicking on anything YouTube can record?). To add to it, if the viewer is watching each of the videos for almost 30 seconds exactly (or less) there is an increased probability that it is not a human but a bot (or a human watching the bare minimum as part of a view exchange program).

Any bot-like action will result in an account’s views do not be added to your view count.

It’s not uncommon for viewers to watch a video for say five seconds, skip forwards a bit and watch for another ten seconds as they look for a specific part. It is hard to say whether skipping through a video, but watching a scattered 30 seconds, would count as a view or not.

Sometimes YouTube will freeze a view count in order to check that it is accurate. When the count is unfrozen, the count may jump up as views are validated or it can go down if YouTube detects a problem.

You can use YouTube’s analytics reports to monitor an estimate of your potential views, but there is no assurance that this data will completely match your official view count.

You may have seen a lot of videos that have a stagnant count of 301 views. The algorithm behind YouTube’s view counting system believes that any video which has fetched higher than 300 views has the ability to impact people’s perception of quality on YouTube. They do not want the homepage to be crowded with artificially popular videos.

This is why view counts are often frozen at 301. The employees at YouTube then manually verify whether the views obtained so far are legitimate or fake. Once the employees are sure that the views are legit, the counter is unfrozen and you will see an upward swing.

During the period when the view count is frozen every legitimate view is still counted, just not added immediately. Once the YouTube team is sure that your videos are not getting fake traffic, your view count will be updated to include views that were registered during the frozen phase. However, YouTube says it won't flag videos at 301 views anymore.

In short, we know YouTube expects a viewer to watch a video for around 30 seconds before it counts a view, that views from suspicious accounts are not counted, and that YouTube can decide to freeze your view count while they review your views. They are protecting the site from becoming saturated with videos that only look popular because of bots. Ultimately, ‘how does YouTube count views’ isn’t a question anyone but YouTube can answer for sure, but we do know it isn’t as simple as ‘a view is someone clicking on your video’.

If you want to engage your audience with cool effects and Filmora is the best choice to make a split-screen and green screen video for YouTubers. Download it now to have a try!