We are just around the 22nd century, and big projects are successfully being handled through virtual apps. The students are recording online lectures, and employees are recording conference calls.

While taking into consideration Xiaomi, the Xiaomi screen recorder would be the crux of the article. With that, three popular screen recorders with their features will be introduced in detail.

Part 1: How to Record Screen on Xiaomi Smartphones?

Before we get into the Xiaomi screen recorder APK, it is essential to understand how Xiaomi came into the field to create a brand name.

Founded in 2010, Xiaomi Inc. has changed the narrative of regular Android devices in the market. In a short time interval, this company became a global product that offers honest prices for Android lovers. Xiaomi has multiple features that give it uniqueness as compared to other devices. The screen recording feature is one of the most workable traits of the lot.

Screen recording has become a need these days as everything seems to be occurring online. Everything is under the shadow of video and audio recording, from meetings to classes and exams to conferences. So, without delaying the process any longer, let us switch our focus to the process of screen recording on Xiaomi smartphones.

You have to bring the "Screen Recording" feature to the Control Centre in the first step. Hold your Xiaomi smartphone and access the Control Centre. The user can swipe the screen from top to bottom to open it.

The top right side of the Control Centre offers a pen-shaped icon just beside the “Settings” icon. Click on it and the bottom panel will display “Available Toggles,” where “Screen Recorder” would be present.

Tap the (+) sign on its top and make it a part of the “Control Centre” for better accessibility. Now, to initiate the screen recording, launch the Control Centre.

The Control Centre shows the Screen Recorder. Hit on it and begin the procedure. The screen recording would be started, followed by a timer with a red dot. If you have to stop the recording, tap on the red dot. The video recording is saved in the gallery.

While we are on Xiaomi voice recorders, let us have an insight into the top three screen recorders that would work like a charm in Xiaomi smartphones. In most typical scenarios, we need more than audio and screen recording. One has to make precise edits to the video, work on its display and quality, and whatnot.

In such a situation, the built-in screen recorder of Xiaomi may not work. It would be best to have a screen recorder that understands all your needs and bring nothing but the best. So, without taking any longer, let us discuss the three popular screen recorder Xiaomi APK.

The Super Screen Recorder has an extensive set of features that have made screen recording fun and interesting. One can count on this tool to bring productivity to the workplace. Use the application to record clean and clear videos with one tap on the floating window.

The workable traits of Super Screen Recorder are as given below:

The app can be used to trim the unnecessary parts of the video and control the speed.

No watermark is present in the final output; thus, making the process clean and smooth.

There is no recording limit when it comes to Super Screen Recorder.

The multiple features of this magical tool include:

DU Recorder Pro covers the video recording of gameplays, video calls, tutorials, and training videos. The smooth recorded output is provided by this tool which has made it popular in the field. Acting a workable Xiaomi screen recorder APK, DU Recorder offers a countdown timer and a floating window to navigate diverse settings in seconds.

Following are some attributes associated with DU Recorder Pro:

Wondershare Filmora has to be your clear choice for the best desktop screen recording experience. For once, it gives the user independence to choose between a “PC Screen,” “Webcam,” or “Voice Over.” The options help the user make the right choice. Additionally, there is an option of choosing the entire screen, custom, or a targeted window.

Wondershare Filmora has enhanced the user’s free will by letting him take control of the video quality and frame frequency. The user can decide if the microphone has to be switched on or off in the process. Not only this, one can rely on Filmora to insert the expected closure time of the video recording.

After that, the screen recording stops automatically. There is a mouse clicks option that is displayed during the video recording. Filmora offers a different design of the mouse display and lets you choose if you need the click sound. The Pause/Resume hotkey and Start/Stop hotkey can also be tailored to user needs. 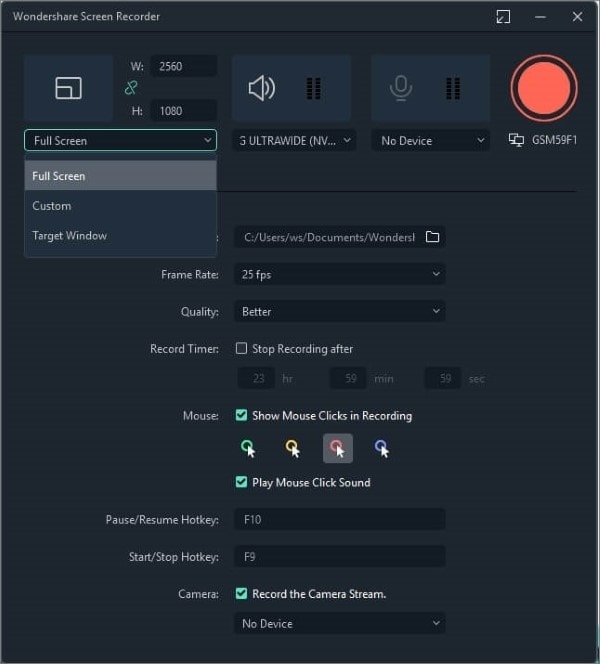 In short, it would be hard to find a screen recorder that takes all the user’s needs under consideration. After the settings have been updated and the recording is done, the tool saves the video automatically to the library.

The user can access the video from there and make necessary changes to it. The changes can be as slight as altering the brightness or saturation of the video and as massive as cropping, trimming, or adding effects to it.

Xiaomi has made the brand name in a short interval. The article reviewed the Xiaomi screen recorder function and how it comes to the rescue. The renowned screen recorder was also introduced with its key features. Wondershare Filmora was recommended by the end of the write-up as the best screen recorder in the market for Windows and Mac users.