If you want to boost your productivity with software usage then it becomes essential to take help from keyboard shortcuts. The rule is same for DaVinci Resolve because there are so many tools and control functions that users often need to access from drop down menus. It is possible to use keybindings for convenience when you are working on colour grading tools. The article below will help you to learn about most useful keybindings for DaVincu Resolve. The details are with reference to Window keybindings but if you are working on Mac then you simply need to replace control key with the Mac key for operation.

If you feel like it is hard to memory all the compliated Davinci Resolve shortcuts, why not choosing FilmoraPro - Filmora's video editor for pro. With it, you can easily add text to video, make effects, edit audio and auto correct color, so you don't need to use the hard-to-rememeber shortcuts. The interface is intuitive too. However, if you want to use shortcuts, FilmoraPro is also available. Just download it to have a try (FREE)！

DVR possess four different functionality pages and they are usually accessed from four buttons available on bottom portion of DVR interface. These buttons are usually organized with workflow order and they always stay active so that users can easily switch between grading, editing, importing and outputting needs. Here is a full PDF Davinci Resolve shortcuts reference.

Following switch page keys can make your task much easier:

Following keyboard shortcuts can be used to navigate between timelines, clips and control playback. 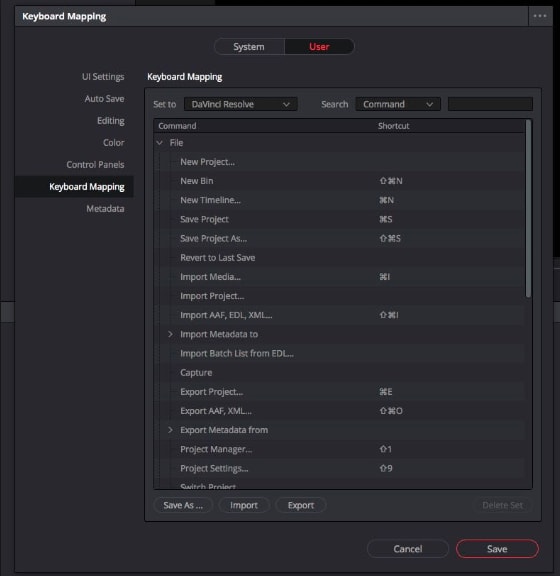 Action: Users often need to watch their grade over playback; Loop playback option can save your time for playback control adjustment.

These shortcuts are common for most of the editing applications but they provide effective controls for editing as well as playback. The list includes:

Press K with J Tap: Move Playhead back by one frame.

It helps users to deactivate entire grade means every node on the clip layer will be automatically deactivated. It will help you to make better analysis for your project.

Many times users need to know that whether they are working on right node to improve grade or not. If you use Ctrl+D shortcut then it will immediately disable your current node and you will be able to analyse appearance of your project without that particular node.

One may need to append any specific node on node graph during editing process. It can be easily done by using Alt+S settings where ordinary corrector node gets itself added right after your current node.

It is same as that of appending node function where a new corrector node is added right before the current working node.

You will find DVR colour tab highly cluttered with things like node graphs, clip lists and timeline etc and it becomes really difficult to search for necessary image parts during editing process. Use Atl+F to get rid of these unwanted items so that you can have larger view of image.

Use this shortcut when you wish to have full screen view of your project.

The previous full screen control never allows users to work on Power Window. But if you really want to access that portion then simply use Shift+F and it will provide you options to change window as per need.

Bring back your zoomed image to normal settings on window.

Sub-select required parts of image so that you can have more details about specific portions.

Skipping between Various Clips: Arrow Keys Up/Down: To check the sequence of editing clips with its neighbours, simply use skipping option with above shortcut key.

You may find DaVinci Resolve is complicated during editing, and you may need to remember so many shortcuts to edit your video efficiently. So here, we recommend a simpler yet powerful video editor FilmoraPro. It features both some basic video editing features and advanced video editing features. And you can use it in your Mac or PC freely, so you don't need to rememeber so many shortcuts. Just download it to have a try.

How to Round Trip from Final Cut Pro to DaVinci Resolve

How to Use Smart Bins in DaVinci Resolve 12.5 More Effectively

How to Stabilize Shaky Video Footage in DaVinci Resolve