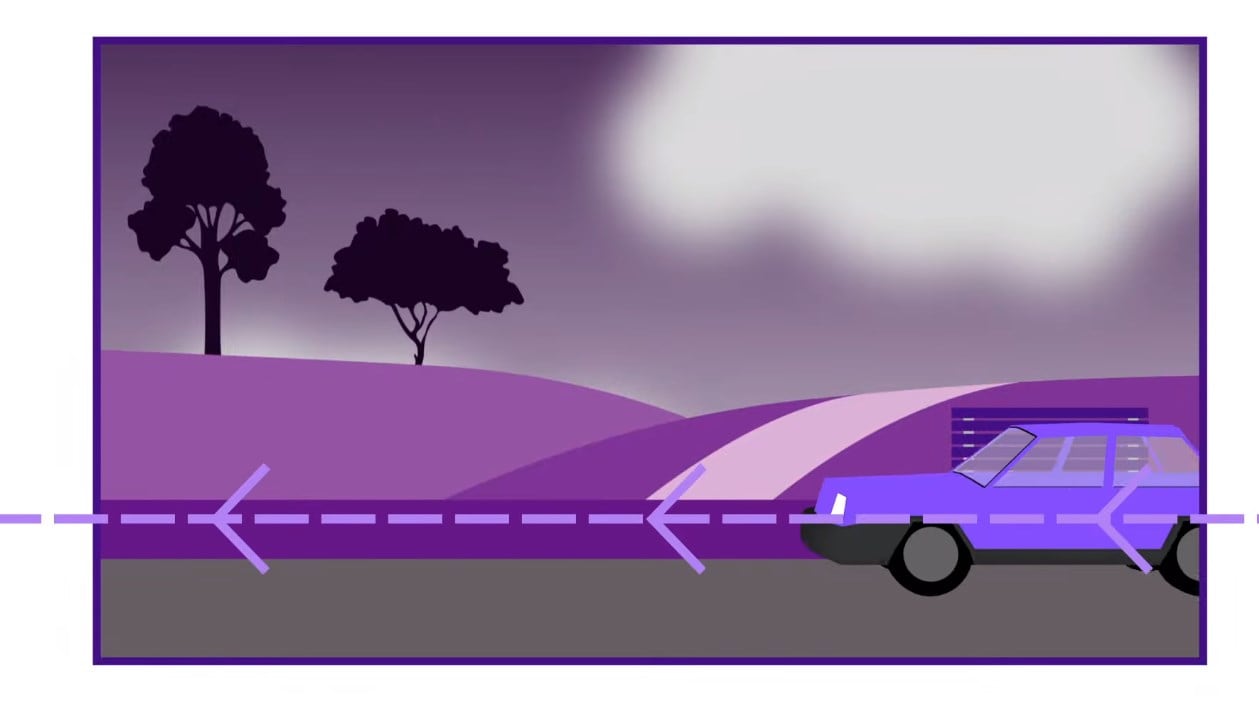 It works similarly to video stabilization by finding the high contrast points and then following them around in the clip. Then it will apply these movements to another clip in a second track to follow the points. 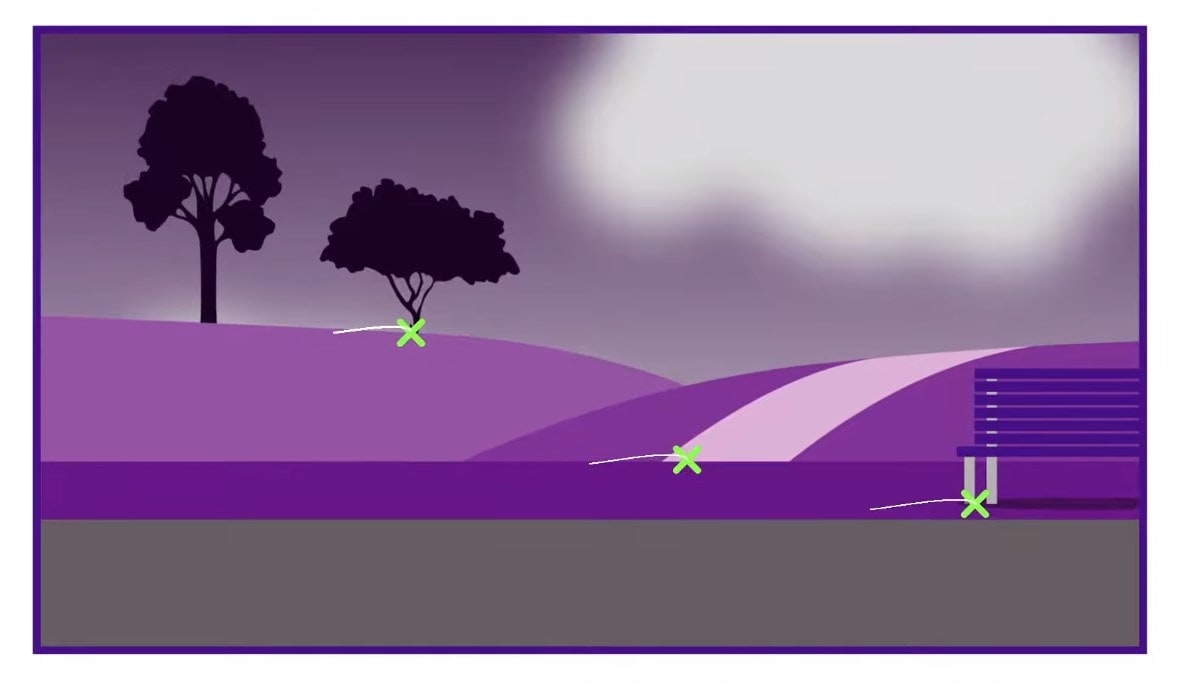 Motion tracking in Filmora Pro can be applied to media elements such as videos, images, planes, and text. The 2D tracking algorithm can match the position scale and Z-rotation of a tracked feature. But note that it will not match all kinds of rotation or perspective changes.

How to Apply Motion Tracking?

At first, we'll place the clip to be followed in the first track. In this case, we'll use this vertical video of somebody hiking. Then on the second track, we can use the second clip or object, which will be following the movement. Here we'll use the text shown in the image.

Then we'll apply the motion effect to the text and select the hiking video to be followed in the effect. The motion track can be found in Behaviors. On the Controls Panel, FilmoraPro will immediately start analyzing the tracking points. After some processing, we can see all of the tracking points as gray crosses. If you don't see the controller's make sure the effect is selected and the selection tool is active. 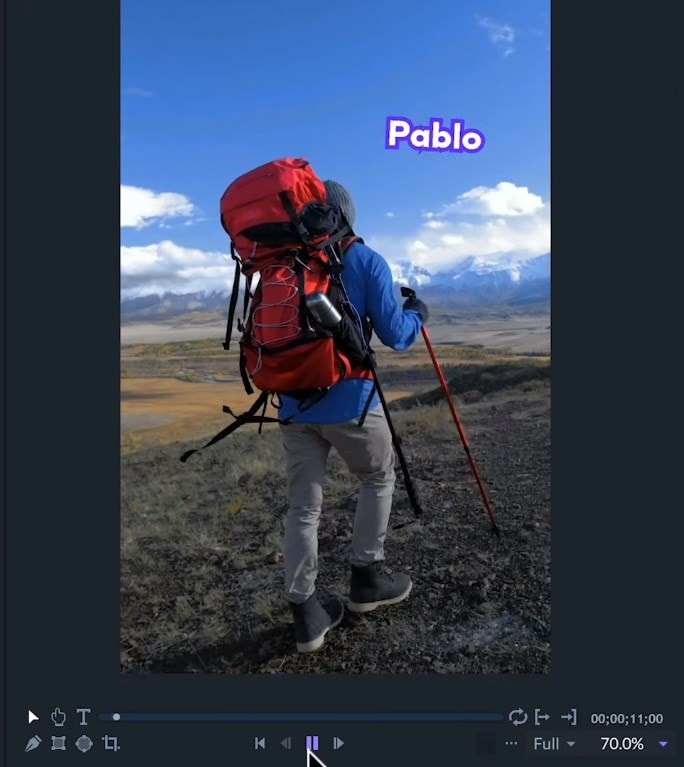 Now, we can select which ones of those should be followed by the text, the same way we did with the video stabilization. We'll use the Lasso tool to select them. For this video, we'll select the points on the hiker. If we play the video, we can see how the text follows him.

The gray points are not selected, so they're not being followed. The colored points, on the other hand, are selected and are being followed. The green ones are the most accurate points to track, and the red ones are not as reliable. We can see several white dots that represent the movement of the tracked object. They will move if we move the object and will change if we adjust the point selection. 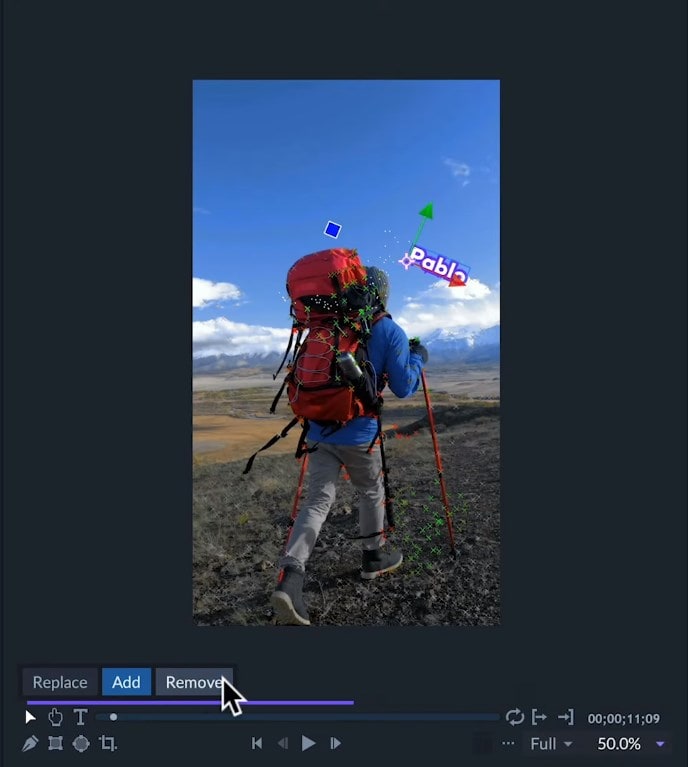 We can edit the points in the Viewer.

We can apply multiple objects to follow the same track, and the movement of each object will depend on the selected points. For this other example, we will apply a graphic on the third track and make it follow the ground.

If the object is not moving as we planned, this means that we need to be more precise on the point selection. We can use the left and right arrows to move the playhead back and forward while checking on the points. Then add or remove the corresponding points to get the best tracking. In this case, the points being followed are in the ground. So, we have good points to follow along the entire clip. We can simply move the graphic outside of the frame, and it will enter and leave the frame. 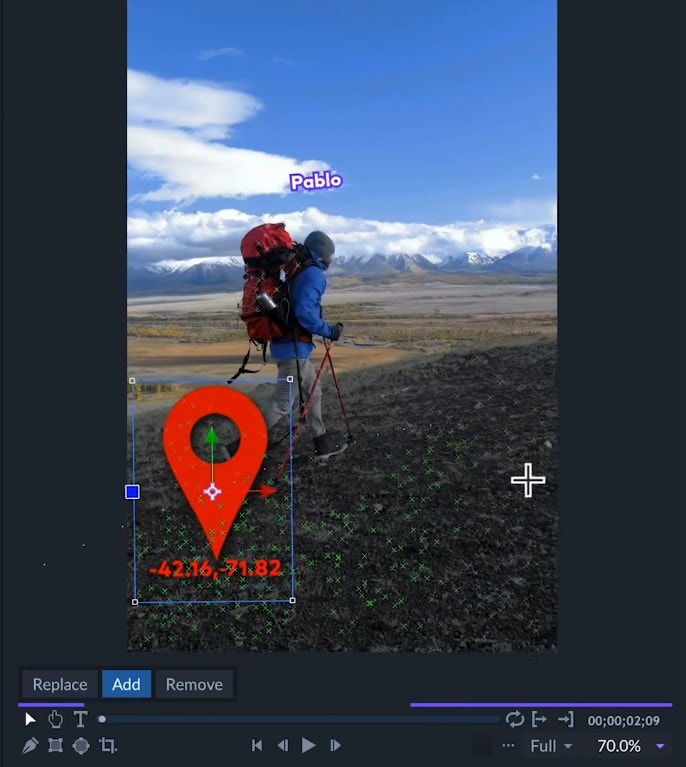 But if we are following an object that enters and leaves the frame, we'll only have tracking points while it's inside the frame. So, we might need to combine the motion tracking with keyframes at the beginning and end of the motion. Another trick we can use if we want to track just an effect is to apply it on a transparent plane and then motion track the plane, although this doesn't work with every effect.

For example, we'll add a fake Sun to this shot below. In the Media Panel, we'll click on the new plane then we'll select the size of the plane. We'll make this one 3000 x 3000 pixels to make sure it is much bigger than the project and select the transparent option. We'll click OK and then drag it to the 4th track on top of the rest of the video. 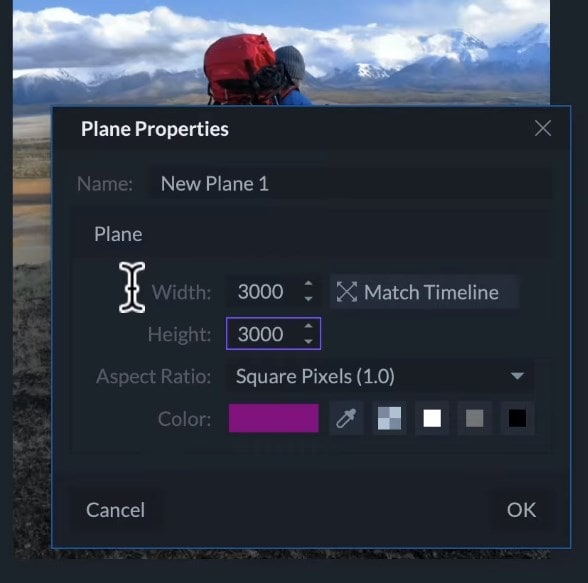 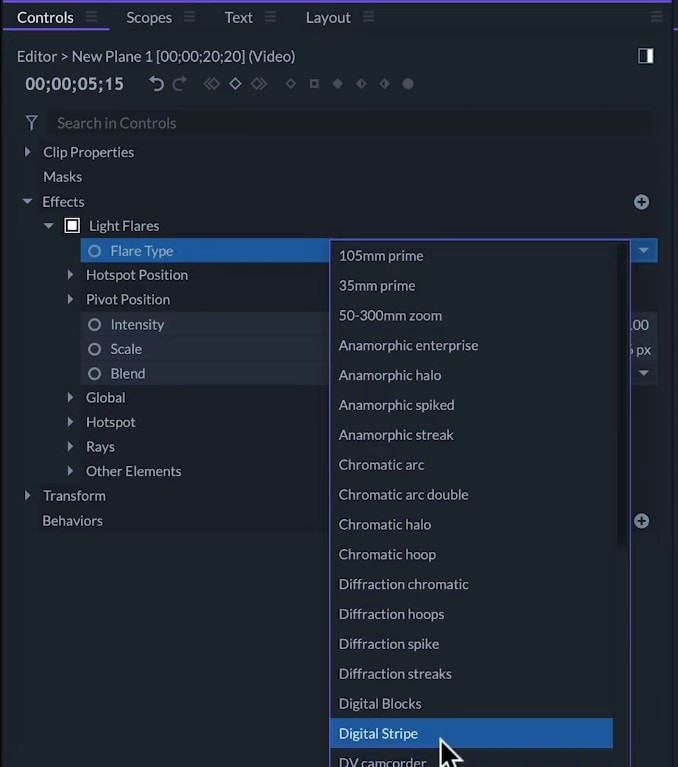 Then we'll lower the brightness of the other elements to zero. We can see that this light has an oval shape, but we can change the scale of the plane to make it look more circular. Then, we'll apply the motion track effect. Notice that all tracks below my current layer show up in the "Motion From" the drop-down list.

Only tracks that are below the current layer will be available for tracking. You may need to rearrange your layers if you don't see the clip that you want to track. 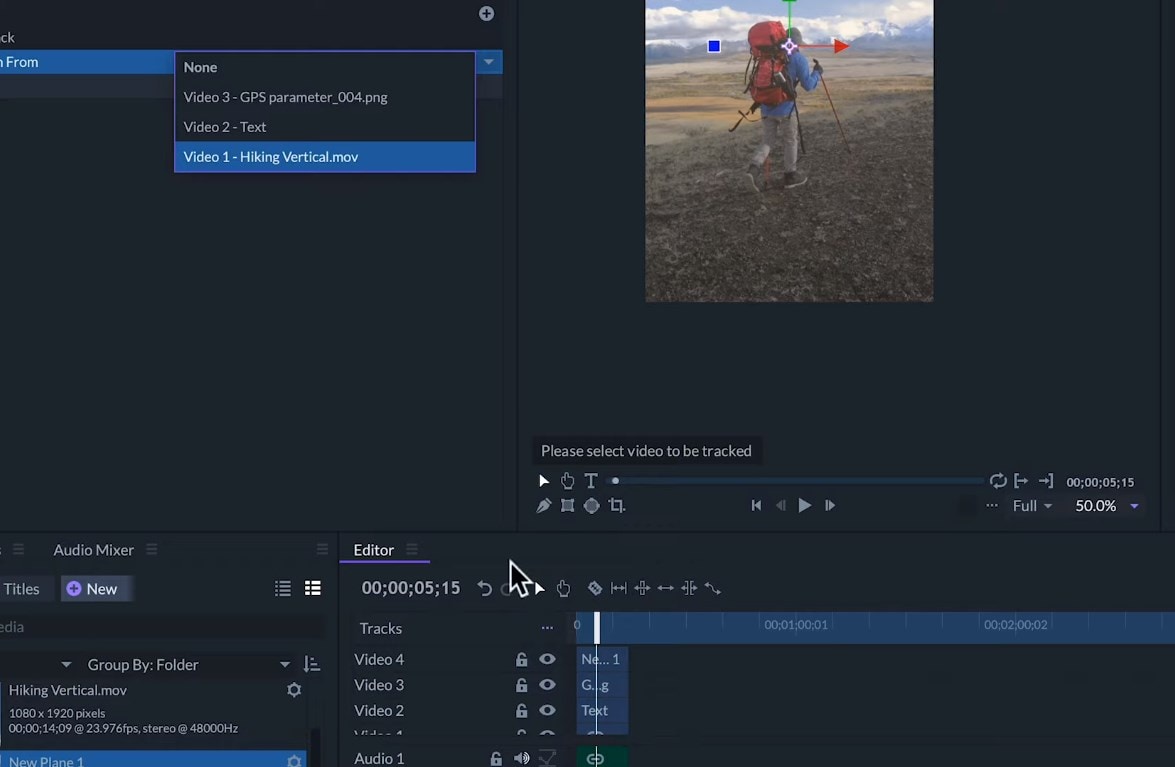 Then we can move the playhead back and forward to correct the points. When we are done, make the track visible again. And here we have a fake Sun. We can place it wherever it looks good.

In the Controls Panel, we can select which parameters we want to be transformed by the motion tracking. 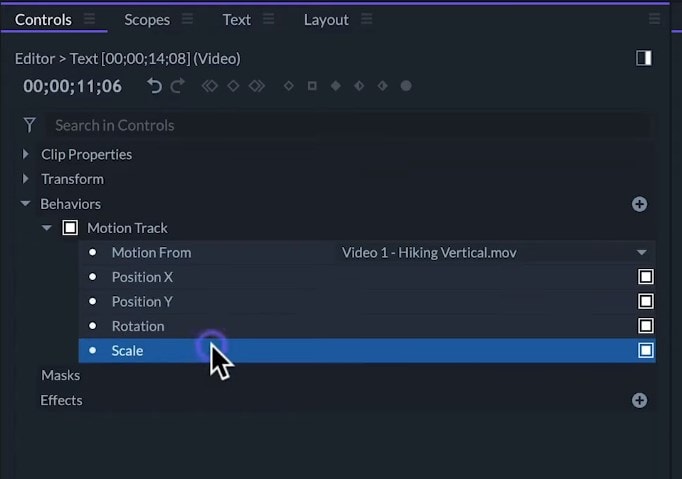 For example, if we want the text to be easier to read, we can deactivate the scale and rotation. And it will only follow the hiker's position. And if we want the graphic to be always pointing precisely upwards, we can uncheck its rotation. If we transform the clip on the bottom, all the tracked objects will be transformed together according to the active parameters on the tracking effect. This also works with video stabilization and other behaviors.

So, those are some basics of motion tracking. To learn more about editing in Filmora Pro, make sure to check out our other tutorials in the series. And remember, there is no limit to what you can make.