Remove Objects: How to Remove Unwanted Object from Photo [3 Ways]

If you're a tourist and want to get memorable pictures of monuments, parks and waterfalls, you'd expect to settle for one that has thousands of nameless faces along with it, but technology has advanced so much that there are hundreds of tools for removing unwanted objects, leaving you with a blemish-free monument to look at and savor.

Image editing applications are a boon to photographers -both professional and amateur---as they allow unwanted elements to be removed in a jiffy, thus bringing back the focus to the main subject. You'd like an uncluttered view of the Eiffel Tower or a pristine view of the White House; now you can have that just for the asking. After all, you would like to have an unalloyed picture that really makes a mark.

Here, we recommend Fotophire for beginners to remove unwanted objects from photos because it is easy to use with its intuitive interface and it allows you to remove the objects easily in the Photo Eraser mode . With the Eraser or the Clone tool, you can remove the unwanted person or objects without affecting the image quality . You can also add 200+ photo effects to perfect your images or remove and change image background easily.

There are expensive tools like Photoshop and Fireworks which work their magic to give you exactly the kind of photo that you want, but there's another rather efficient and clever app –Inpaint . - that works easily to remove specks of dust and scratches, watermarks and even time and date stamps from photos- not to mention removing unwanted objects. Its magic tool waves a magic wand and hey presto! Everything but what you want just disappears. You can really clean up your snapshots very efficiently with it.

Once you've installed Inpaint, open the file and choose the image that you want edited. Using your mouse pointer as a red marker, color the objects that you want removed. Then click on the Inpaint button; within seconds it removes the red colored areas and what's more looks around for appropriate area fillers. The objects have vanished and the areas are appropriately filled—-only a sharp eye can notice that something was modified. In case you do notice a dark or blurry area, just mark that area again and fill it appropriately. The picture is as good as new.

In case there are many objects to be removed, you'd be better off if you mark areas individually, process each one before moving on to the next one. This way, when Inpaint fills the areas after removing the object, the colors will more or less match its immediate surroundings making the photo look more natural.

The Inpaint website lists Inpaint as a $20 product that you download from the site, although a basic version is available for $4 at the Mac app store. Of course the former version has a few more additional features.

You can get Inpaint at 40% off by taking advantage of this deal.

Pixlr Touch Up, a next-generation photo app from Autodesk is built on the Chrome app platform and now is available for Chrome OS and Windows Chrome users. It works from Chrome’s browser window and opens up in its own interface and allows users to work in their browser to edit photos. As Google Drive is directly integrated into the app, images in the drive can also be edited easily — regardless of the format--- JPG, GIF, BMP, PNG, TIFF and even PXD. 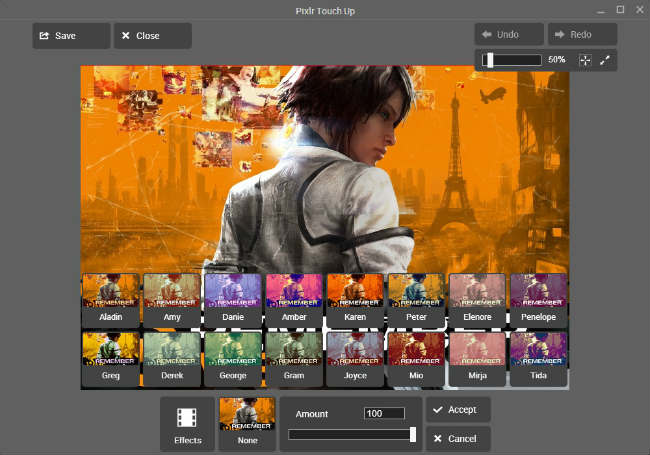 You may also like: Best online Video Editor for Chromebook >>

The Google Chrome Web browser is not just another browser, it operates more like an operating system and is so flexible that users can install apps that not only work like desktop apps but also do not require any Internet connection. Pixlr Touch up app can not only be used in the browser but it can run offline on your desktop using the chrome app launcher.

To edit an image, first select an image that you want fine-tuned by clicking the relevant button on the home screen. This loads the image into the editor and then by using the Touch Up option, you can get rid of all those objects and details that are an eye sore. In addition, there are other options such as clone, contrast and rotate that do just what their names suggest.

Online image editors are a great way to edit images in the browser itself and are extremely popular when you need to fix images quickly. The advantage with Pixlr is that in addition to easy editing in the browser, it can also be used offline.

So whether you want to put the finishing touches on your photos or automatically remove unwanted details from your photos so that they look as if those objects were never there in the first place, Pixlr touch Up is the way to go.

Thank you for your comment. We will review it within few days.
You May Also Like
How to Blur Faces in Photos [Best Photo Software for Computers and Phones]

We will show you how to blur faces in photos with some desktop face blurring programs and mobile blur face apps to use for blurring faces.

How to Make Blurry Pictures Clear Easily and Quickly [3 Ways]

3 best programs to clear up blurred photos in just a click with tutorials. They are similar to Photoshop, but simpler and more straightforward.