How to Add Video Credits in Filmora with Ease

What are the video credits?

In simple words, video credits mean giving credit or a kind of copyright to the creator of a particular video or movie. You can commonly find them in movies, YouTube videos, and music videos. Another name is ‘Film Credits’ for them. You can also call them closing/cover pages for the brand video. It helps viewers to find the creators of the video quickly. All in all, the video credits consist of both the closing credits and opening credits.

Opening credits are opening titles, whereas closing credits are closing tags. You are only required to check the order or hierarchy to insert these titles in the video.

Why is Video Credits Important?

“The film is not only made of actors, behind it are certain film credits to consider.”

Want to know the significance of film credits? Remember that credits are like being grateful to the creators of video for the best outcomes both in the present and future. We believe that a movie is incomplete without such credits. Given below are points to state the importance of video credits.

Adds quality to the video!

Video credits are essential because they add quality to the video. Adding the right titles ensures your brand positioning as well. And, viewers, of course, love this sort of consistency and authenticity in the video. Even the animated and straightforward logo titles can work wonders for your work.

You can add links!

You can also add links to the film or video credits to show a brand's presence or direct the customers to a particular product/service. However, we also refer to link here in the form of different contacts. With the availability of various acknowledgments, on-screen, producers, or other advertisers can quickly contact that skilled person, you need to hire in their project.

Adding film credits are also essential for copyright purposes. When a specific person gets a particular title in a video, it is an assurance that no one else can claim the creation or work done over the video. As the name suggests, these are the acknowledgments that serve the purpose of copyright as well.

What do closing credits include?

The perfect bookend is the director's name included as one of the characters in the closing credits. For instance, the director and writer are the same people, and then the credit is given as 'Written & Directed by". Then, the names of other production personnel such as executive producers, etc. will come.

Even though the end credits are quite dull and not that catchy, you still have to insert them and appreciate the persons who have done the fantastic cinematic work. There is no such standard to write the order of end credits, a tradition that has evolved to express them in a certain way.

So, the closing credits begin with ATL (above-the-line) individuals along with other production personnel. The closing credit names are often visible as standalone cards in the films.

Given below is the standard hierarchy of end credits.

A film director controls the dramatic and artistic aspects and also visualizes the script while guiding the actors.

The writer in the film is generally a screenwriter or screenplay writer who practices the writing craft for cinema, mass media, TV programs, video games, etc.

Producers coordinate and plan the various scenarios of film production.

Executive producer finances the film production either by themselves, independent financing company, or studio.

The lead cast simply means the leading actress, leading actor, the main characters of the film.

The supporting cast is the actors below the leading cast offering assistance to the lead cast.

The DOP or cinematographer is the chief who regulates the light and camera work on a film.

The production designer works to set the overall visuals of the story or film.

The film editor works for editing work, such as cutting specific shots, checking the raw footage, and combining them with different sequences.

As the name suggests, the costume designer designs the costume for the overall cast of the film.

Music composers are known to score the music going into the film. They write the score by summing the entire original music in a movie.

Casting directors get hired to find the ideal match of stars or actors as per the different roles.

So, this is the typical example of closing credits hierarchy.

How to Create Video Credits Easily in Filmora?

Let us see the whole process of adding video credits in Wondershare Filmora Video Editor. Consider the step-by-step tutorial given below.

After launching the Wondershare Filmora Video Editor, you have to import the video files first. Before you do the actual step of adding closing credits, go through a list of actions. Even if you have set the scrolling credits at the beginning of the project, you must find an exact spot to position this playhead. 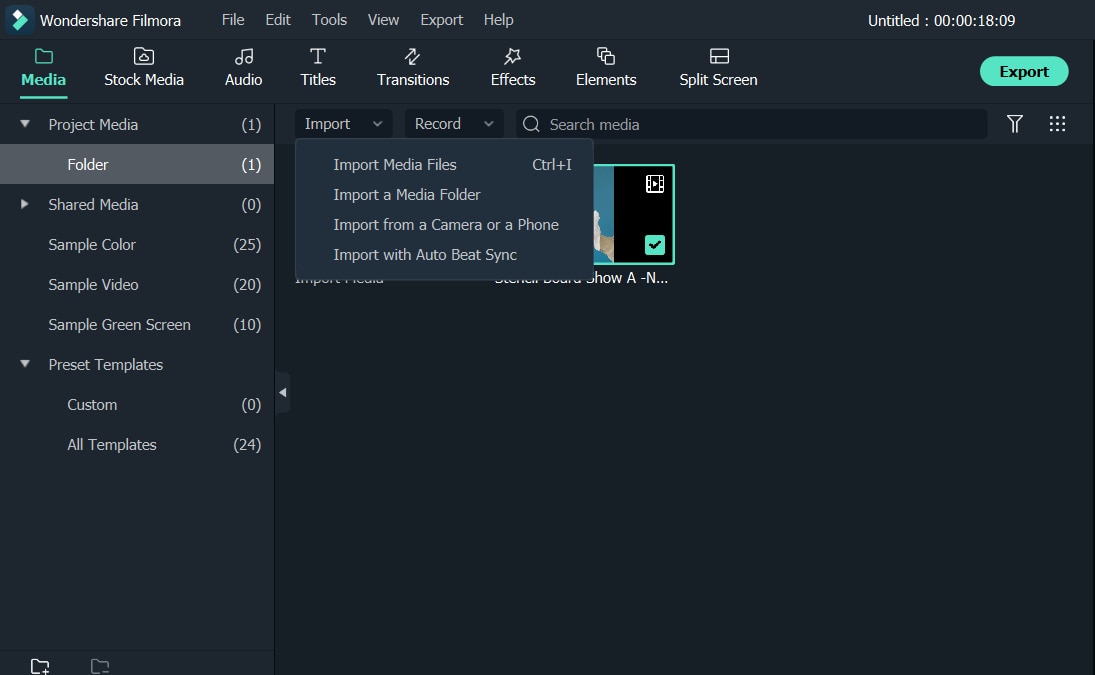 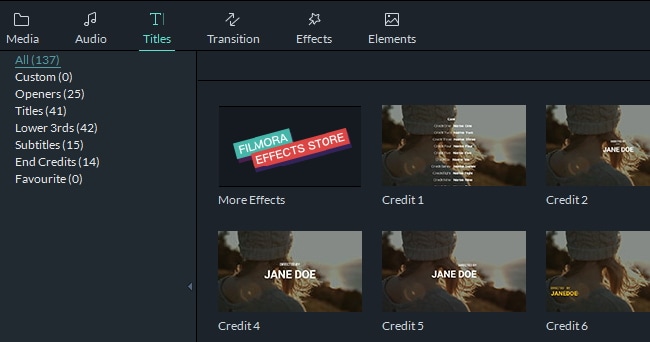 You can alter the full length of the video credits after placing them on the timeline. Double-click the scrolling credit and access the text editor to insert text and change its font or style. Moreover, you can change its alignment, size, and spacing as well. Click the Advanced tab, as shown below, to access more features. After choosing your style, select the Save as Preset button to proceed with OK. 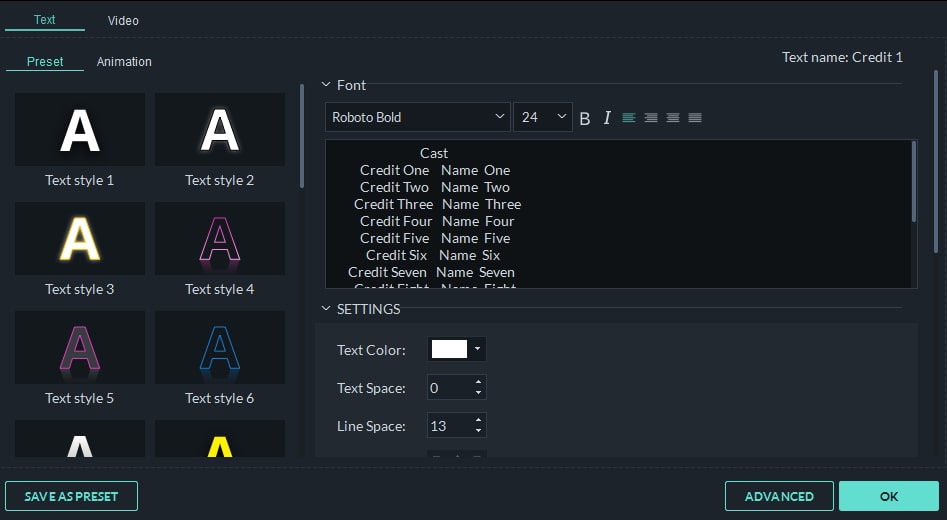 Finally, you can now choose the format in which you want to export the video and click the Export button after you complete this setting. Then, you have to set the location of export, as shown in the figure below. 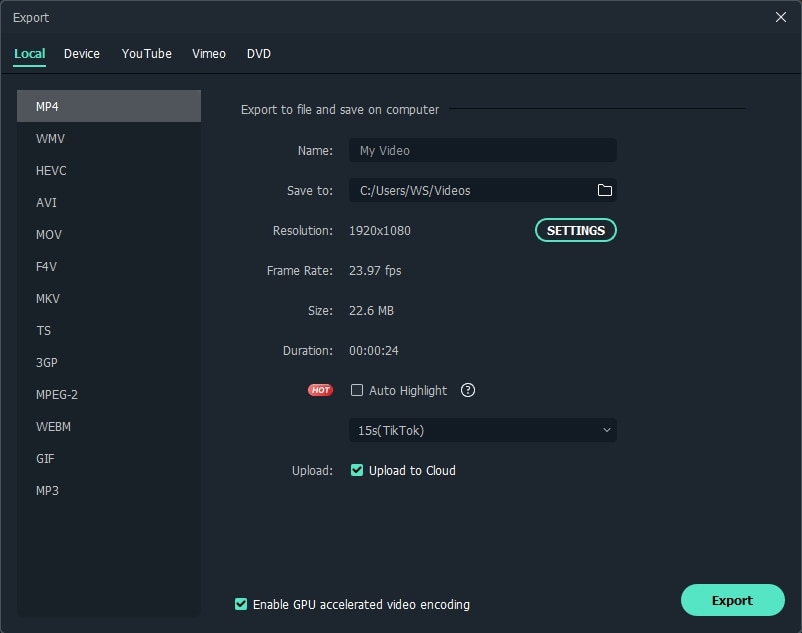 In this manner, you can use various video animation effects such as tilt and slow-motion to enhance the overall quality. Adding film credits like above is also an exciting part to do with Wondershare Filmora Video Editor.

So, this is the ultimate process of adding video credits in Wondershare Filmora Video Editor. Along with the process, we've also discussed the definition and importance of film credits. However, adding recognition is not that difficult as it may seem. By following all the steps mentioned in the last section, you can easily make those stunning scrolling credits. It's a matter of creativity than choosing reliable software. Then, you can do wonders even if you are not using Adobe Premier Pro.

Appreciation is always the best with the proper credits!

Learn everything about video credits, film credits, and closing credits in the article above. Also, get to know more about the best video editing software, Filmora from Wondershare.