How to Add Lightning Effect to Video Easily: An Ultimate Guide

The best camera in the world can’t capture a perfect picture without good lighting. But that’s a whole different concept than the lightning effect! Learn how a film crew uses lighting to improve images, create depth, and support the story’s overall atmosphere and mood.

The cinematic lighting effect is a technique that goes beyond the standard three-point lighting setup to add depth, drama, and vibe to the story. Such products utilize lighting tricks such as diffusing light, bouncing light, and adjusting color temperatures.

So, let's learn all you need to know about adding lightning effect video as follows without any further ado!

Part 1: When to Use Lightning Video Effect?

The lightning effect is an electrical discharge caused by imbalances between the ground and the storm clouds or within the clouds themselves.

Lightning is pretty hot—a flash can heat the air among the temperatures almost five times hotter than the sun's surface. This heat causes the air present to vibrate and enhance, creating the pealing thunder we hear most quickly.

If you pinpoint such lighting effects directly on specific people or objects assists in persuading the viewers to direct their eyes to the intended spot, ensuring that you do not miss the essential aspects of the video.

This effect can also be useful to add texture and color to otherwise bland scenes and environments. The proper use of a transparent lighting effect can change the way objects and people appear in the background; they can look evil, innocent, frightening, beautiful, happy, or even ugly.

The three main kinds of lightning are by present or implied: between two clouds, within a single thundercloud, or between a ground and a cloud. In addition, various other observational are recognized, consisting of "heat lightning," which can be previewed from a great distance but not heard, which is dry lightning, which can cause ball lightning and forest fires; observed scientifically quite rarely.

Part 2: How to Add Lightning Effect to Video in the Fastest Way?

Video effects, also known as visual effects or simply video filters, create crazy visuals with taps. It's simple to do, and stunning results are also quite agreed. This is why people love video effects, especially lightning effects. Such effects are used even in high-budget Hollywood movies.

However, many video editing software is available on the market, but they only come with minimal video effects. On the other hand, Wondershare Filmora offers 300+ free effects, consisting of Picture in Picture, Transitional effects, Intro/Credits, Sound, Titles, Mosaic, Jump Cut, and more. All of these ingredients are great to professionalize your video to the next level. In the following, we'll show you how to add special lighting effects to a video in just a single tap. So download it to have a try!

Step 1: Add media to the timeline

Firstly, import the media and add it to the timeline. There are mainly two ways: via the "Import" tab over the main interface or simply dropping files from Windows File Explorer to the User's Album. This software supports all famous video/audio/photo formats.

Now it's time to apply lightning effect video. Firstly, drag the video file from the User's Album to the video Timeline. And then click the Effect tab at the top.

Select the Thunderdome lightning effect to apply as shown below. Also, make sure that the added effect only applies to the overlayed video. If you want to increase the duration of effect used, hover the mouse over the filter clip's edge and drag it to the length you wish to when the "double arrow" cursor occurs. 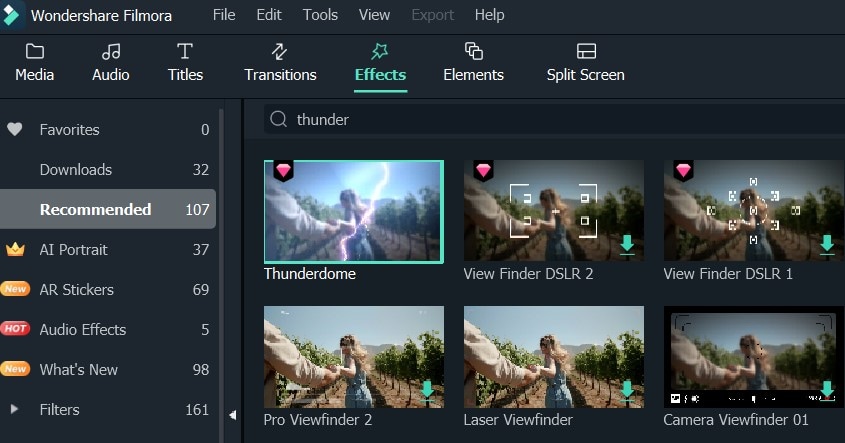 When you are happy with the lightning effects applied to a video, choose the Export tab. You can save the video in all famous formats on the PC system by hitting the Local option and mentioning various necessary settings. Then, you can export the video project according to the device and share it on various social media platforms.

So, this is how straightforward you can add lightning effect video with the help of Wondershare Filmora. Even beginners can create a professional-looking project with just one click over the ‘Thunderdome’ lightning effect.

Part 3: How to Add Lightning Effect to Video in After Effects?

The Advanced Lightning effect of Adobe After Effects creates various sorts of electrical discharge simulations. However, this lightning doesn't self-animate, unlike the Lightning effect in other video editors, especially the one we made above with the help of Wondershare Filmora.

We've started the tutorial on animating the Conductivity State or other properties to animate the lightning effect.

The Advanced Lighting effect includes the Alpha Obstacle feature, with which you can make the lightning greatly hover over designated objects.

As we're into the tutorial mode, the composition is already there, and we'll start further with the steps as follows.

Go to the Layer tab and choose the New> Solid option, as shown below.

Then, a window will pop up, which you can name Lightning 1.

As you observe, the lightning effect you have applied contains two anchor points. You can adjust these points accordingly with the same anchor points. Try grabbing their anchor points in the direction you wish to place them.

For instance, we’ve dragged the anchor points and placed the effect as follows.

Now, you need to fine-tune the lightning effect, for which you should first visit the Direction tab under Lightning Type and set it at Strike.

Now, as you scrub through the timeline, there will be no animation. Here, we need to begin our timeline and add a keyframe for conductivity state, and then we'll go to the end of our animation.

Right on the same left-hand panel, you have the option of forking, which you can increase or decrease in percentage to control the visibility of lightning strikes.

And, the color of the lightning effect can be changed in the Core Settings.

Come to the beginning of the timeline and start adding keyframes for proper animation. Here, you need to forward the keyframe a little bit, only a frame or two. Then, grab the anchor point for the direction and line the same over the origin.

Now, come to an end just like 4 seconds from the beginning. What we can do is add a keyframe for the origin, and we'll move forward by just a frame or two and wrap that origin anchor point and put it on top of the direction anchor point.

Now, boom! It goes on as follows.

It's all done, but we can add a few more things to create a professional-looking lightning effect that stands out better among others.

And, one thing you can do here is add the glow to your effect by clicking the Effect> Stylize> Glow option.

So, here you’re done with adding a lightning effect video within After Effects.

To truly set your lightning effect into videos apart from the others, you need to consider the following simple yet effective tips.

Please read them and have fun!

1 - Create the illusion of light coming through the clouds.

2 - Add illumination to scenes with lightning.

3 - Use a mask, opacity, and feather to create intense glows.

So, this was our quite impressive tutorial on adding lightning effects to videos with both the fastest way and complex, long way.

In the advanced After Effects guide, we've shown how to recreate the Lightning Bolts over a text moving in slow motion via adjusting the effect through keyframes.

On the other hand, Filmora also contains an impressive collection of visual effects and a rich library of elements. This enables you to attractively draw the viewer's attention to an essential detail in the emojis or shots that make your videos.