Is Blender 2D Animation As Awesome As 3D?

To help you along the way, we have put together a detailed guide on how to create Blender 2D animations and use them in your videos to make them look more stunning. So, without any further ado, let's get started.

Part 1 Is Blender 2D Animation As Awesome AS 3D?

There's no arguing the fact that Blender is a remarkable tool for 3D animations. Its worldwide popularity is clear proof of what one can achieve while creating a 3D animation with Blender. But, the real question is - are Blender 2D animations as good as their 3D alternatives. Well, the answer is Yes! Blender has a built-in feature known as Grease Pencil that's specifically designed to create 2D animations. With Grease Pencil, you can create different 2D layouts from scratch and turn them into visually appealing animations to engage the potential viewers.

First and foremost, launch Blender on your system and set it up to get started. On the home screen, click on "File>New" and then, select "2D Animation". 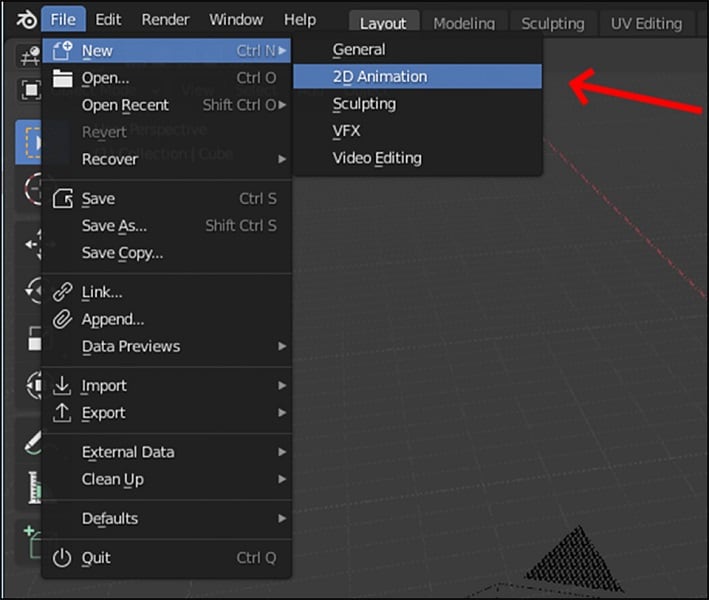 Now, click on the Grease Pencil tool and use it to draw any shape on the canvas. If you want to add multiple objects to the animation, you can also draw multiple shapes. 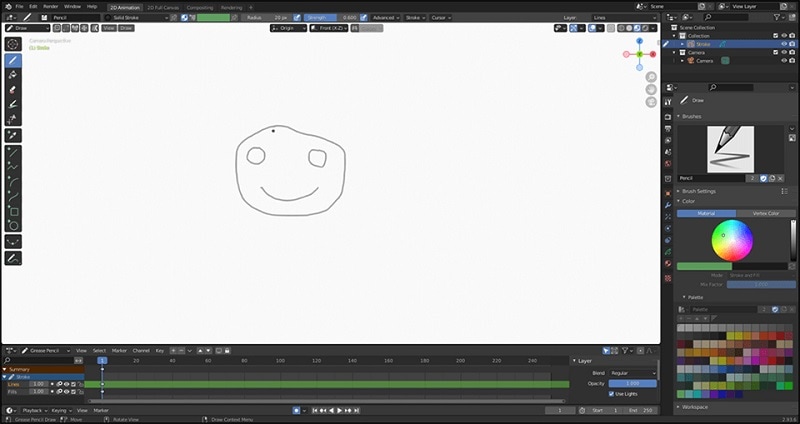 The next step would be to apply the array modifier to these shapes, considering you want to add a specific movement to them. So, add an array modifier first and then apply it over the desired shapes.

After you have applied the array modifier, go ahead and start adding colors to the animation. Keep in mind the more colors you use, the better the Blender 2D animation will appear at the end. 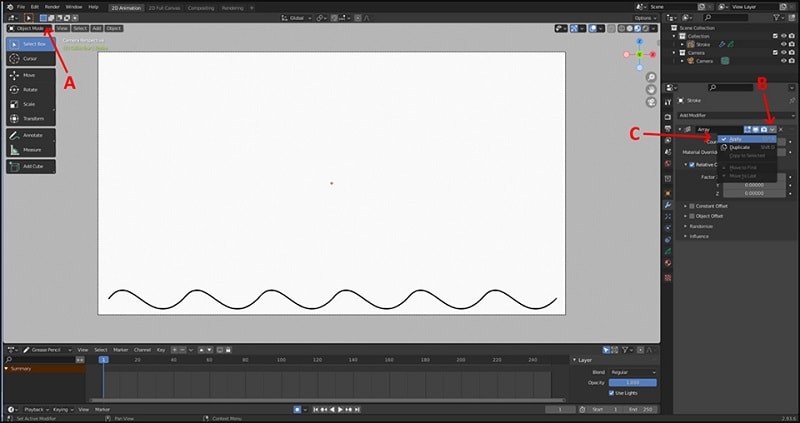 Now, through the editing panel, right-click on the shape you've drawn on the screen and then, select "Rotation and Scale". A separate editing window will pop up on your screen. Here you can customize the movement of the object by changing its scaling options through keyframing.

That's it; your 2D animation is now ready and you can save it on your computer.

So, now that you know how to create Blender 2D animations, let's take a look at a few of the 2D animation tutorials that'll help you get started with your first animation. All these tutorials are available on YouTube and share a detailed insight into different elements of using Blender to create 2D animation.

If you search Blender on YouTube, this will be the first video you'll see in the search results. With 11 million views on YouTube, this Blender 2D animation tutorial is one of the most sought-after tutorials on the platforms.

This 14-minute long video will walk you through the step-by-step process of creating a dedicated 2D animation for a donut using different elements of Blender. What's more interesting is that there's a second part to this video that'll help you move a step forward and dive into advanced editing. Basically, if you want to get familiar with Blender's 2D animation architecture, this video will help you embark on the right track.

Gleb Alexandrov is undoubtedly one of the most talented animation experts who has created hundreds of stunning animations during his career. In this video, he has shared his years of knowledge and expertise and explained different ways to use lighting in your Blender 2D animation.

If you have ever worked on animation or even a regular YouTube video in the past, you may already be familiar with the importance of lighting. If the lighting is right, the subjects look more stunning and the overall frame becomes visually engaging. If you also want to know how to use lighting in a 2D animation, this 19-minutes long video is your answer.

If you are an absolute beginner, it would be better to first familiarize yourself with different elements of the software. Without knowing what a particular tool can do, you'll most likely struggle to pour your creativity into the Blender 2D animation. So, before working on your first 2D animation, make sure to take your time to go through these Blender 2D animation tutorials uploaded by the tech giant itself.

Keep in mind that it's not a single video, but a series of episodes that'll walk you through the basics of Blender and how to start with your first 2D/3D animation. If you are serious about working with Blender, this series is your one-stop solution to get familiar with the application.

Every 2D animation requires at least one character that would act as the main subject of the animation. And, in case you are planning to create a 3D animation with extensive movement, you'll also have to incorporate Rigging to ensure that any movement looks realistic.

This video is for anyone who has a basic understanding of 2D animation in Blender and wants to step up their game. Here you'll learn how to design a specific character on the canvas and how to use rigging to configure its movement. Again, this is not a single video, but a series of episodes, which means it would be better if you sit with your coffee in your hand.

Now, if you are specifically looking for a video that only talks about Blender 2D animations and nothing else, this tutorial by CG Geek is the most suitable option. In this video, CG Geek goes on explaining how to use the Grease Pencil feature in Blender for 2D animation. He has also explained how to keyframe your 2D animation on Blender's timeline so that any movement looks as realistic as possible.

6. Wondershare Filmora - A Reliable Alternative to Blender for Video Editors

Now, if you are a video editor and only want to create an animation for one of your videos, it would not be a wise decision to use Blender. Why? Because the tool has a steep learning curve and it's not worth investing your time if you only want to create a 10-seconds animation. So, what's the next best solution?

The answer is Wondershare Filmora Video Editor. It's a full-scale video editing tool that's designed to help editors enhance their productivity through ready-to-use templates. It has a built-in media library where you'll find dozens of animation templates. You can simply drag these templates to your timeline and customize them to match the overall theme of your video itself.

With its timeline-based editing panel, you'll be able to speed up the overall editing process and create visually stunning videos in no time. The tool also has a stack of ready-to-use transitions, special effects, and sounds that you can apply to the video and improve the overall production quality. In short, if your only goal is to add a 2D animation to your video, it won't be a wise decision to rely on Blender. Instead, download and install Wondershare Filmora Pro on your system and use it to edit the video.

● Even though Blender is a3D animation software, one can use it to create stunning 2D animations as well..

● Blender has a dedicated feature known as "Grease Pencil" that'll allow you to create your 2D animations and customize them to make them look stunning.

● Despite its advanced features, Blender is difficult to use. So, if you are looking for an alternative to Blender (only if you want to create 2D animations for your videos), Wondershare Filmora Pro is the right solution.