Download on the App Store
Get it on Google Play
Download
Download
Call us: +1-60-4343-8521
Mon-Fri 6:00 PM to 11:00 AM Pacific Time
International phone rates may be charged by your service provider
Filmora Video Editor
What is Tumblr and How to Use Tumblr
Try It Free Try It Free

What is Tumblr and How to Use Tumblr

You’re probably living under a rock if you don’t know what is Tumblr. Tumblr is a popular New York-based social networking and microblogging platform. It is currently one of the top 10 websites in the US. Tumblr was founded by David Karp in 2007. Today it has around 500 million registered accounts and more than 171 billion posts. It allows you to share anything and any type of content. What makes Tumblr unique is that, unlike other social media platforms, it offers complete customization of your page. Plus, Tumblr is very versatile as it can be used as a blogging platform, social website, and search engine. In this short guide, we will tell you everything you need to know about the Tumblr app and how to use Tumblr. 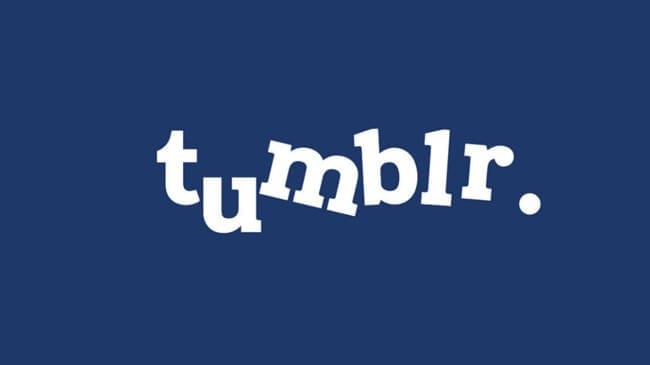 How Tumblr works and what it’s used for?

Nowadays, there are many mainstream social media platforms, including Facebook, Instagram, Snapchat, and TikTok. Despite the tough competition, even in 2021, Tumblr remains relevant and is still going b. It is because Tumblr is simple yet versatile. Plus, it offers the kind of customization that no other social media platform does.

As stated earlier, Tumblr works as a multi-purpose network. It was originally a website, but now it is also a mobile app. You can use Tumblr for multiple reasons and share a wide range of content, but mainly Tumblr is used for:

Social Networking – Like other social media platforms, many users use Tumblr for social networking to connect with different users to exchange messages, share posts, etc.

Micro Blogging – Tumblr was originally launched as a microblogging platform and still serves as one. It is the perfect place to start a simple blog and express yourself. You can also follow other bloggers and share their posts.

Search Engine – Young users use Tumblr as a search engine to find unique and creative content. You can find a wide variety of artistic media based on your interest – pop culture, memes, music, gifs, etc.

Tumblr is a free and open platform that anyone can use. It is popular among the masses with mainly a young audience. 45% of its users are under 35, the majority of which are teens. This is probably because the minimum age required for sign up is 13 years. Teens and young adults enjoy the Tumblr ethos as they can openly interact, express themselves and follow their interests. However, the explicit and mature content on Tumblr also attracts the adult demographic. Despite being on the open web, Tumblr offers a safe and private space for its users to be themselves without feeling ashamed or insecure. 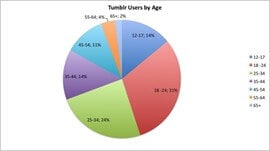 How to use Tumblr?

When Tumblr was first launched, it quickly became very popular. It is an amalgamation of Facebook, Twitter, and WordPress, but it is much simpler to use than all three respectively. Here is a detailed step by step guide to help get started:

To use Tumblr, you have to register and sign up. It is a simple process as all you need to do is add your email, username, and password. You might have trouble generating an available username so Tumblr gives suggestions to help you choose. After emerging the credentials, you will confirm your age and do a captcha test (like finding images of cars/boats/storefronts/etc.)

Once you log in, to get started Tumblr will offer you multiple accounts to follow. You can pick a minimum of 5 different topics/categories. Moreover, you can also choose different subcategories. Then you will click Next to get your custom feed (dashboard). 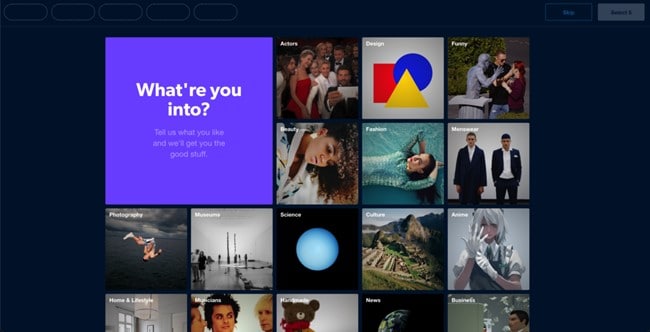 Here is the home screen you will see once the entire registration process is complete. That’s it! Take your time to check our different accounts to follow so that you have a feed relevant to your interests. 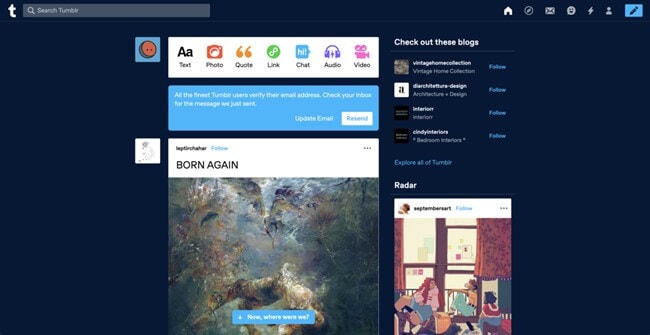 Your dashboard or feed is what appears on your Tumblr Home screen. It will look something like a Facebook feed. This is where you will see all the latest updates and posts from the accounts you follow and other relevant popular posts. Your dashboard is where you can also find new accounts and set different themes. 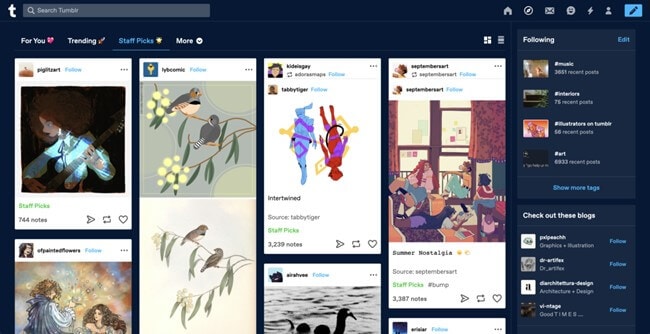 Take a look at the top of the new page. Here you will find a menu where you can navigate through the home feed, the Explore page, inbox, direct messages, personal activity, and account settings. 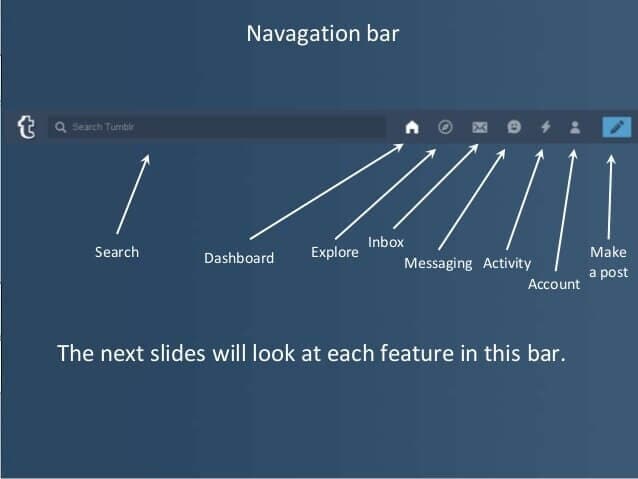 Now you can create and post your own blog to interact with the Tumblr community. To post, look at the top bar where you will see different categories/post types:

Figure out what type of content you want to share and select the post format accordingly. The interface is very intuitive, and you will not face any difficulties. Remember: You can experiment with different types of posts formats, but it is recommended to keep your posts as visually appealing as possible. Finally, choose the right settings and post.

To Explore Tumblr, click on the Explore option (compass) in the top menu. Here you will find a wide range of posts relevant to your interest and likes.

You can also search Tumblr for specific posts through the search bar (by typing in keywords, usernames, hashtags, etc.). A ‘Recommended For You’ option is also present at the top of the screen.

6. Customize Tumblr Settings: How to Customize Your Designs for Blogs, Etc.

One unique feature of Tumblr (unlike other social media platforms) is that users can personalize their dashboard by choosing custom themes – either free or premium. To customize, follow these steps:

Select Untitled under your username and click on the Edit Appearance option to customize. 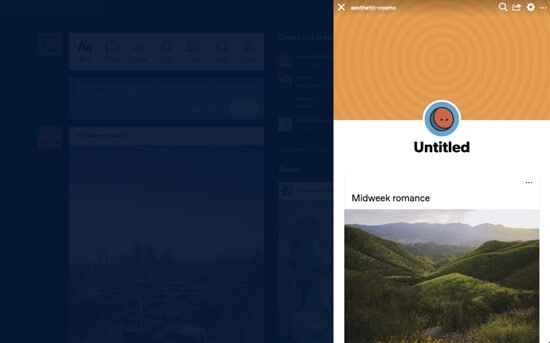 Check out the different themes available to change the theme. This will change the appearance of your page with your domain name. 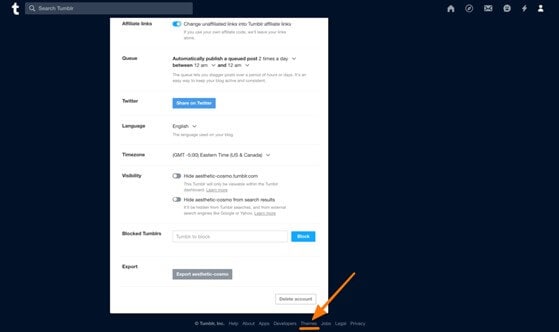 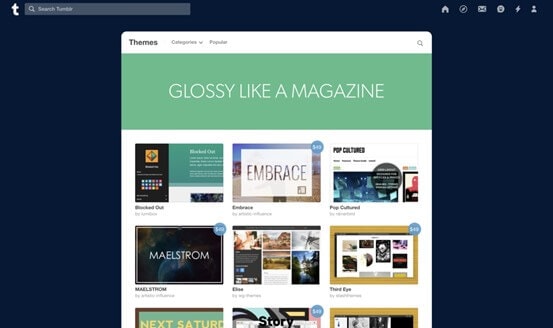 Once you’ve chosen your theme, click Preview to see what it will look like, and once you’re happy with the look of your blog, click Install. 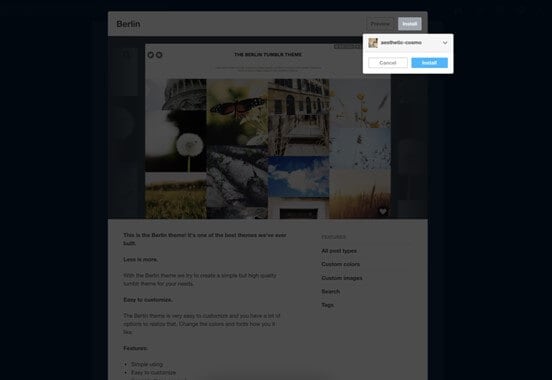 Yes, Tumblr has a business page as well that allows you to promote your business. A lot of businesses focus on other social media platforms and miss this opportunity. But Tumblr can be a great tool to reach a wider audience and expand your reach. The only difference is that Tumblr business promotion requires a lot of research.

So, you have to look into your competition and create a proper strategy. Understand the relevant posts and why they are trending. Find out what you can build on and how you can create a long-lasting impact on the audience.

Tumblr for business promotion is suitable for brands that have a young demographic. Make sure the content is bold, fresh and sometimes funny. Keep the advertising subtle and never post brand-specific posts. And remember: keep the content visually appealing.

How did the sexual content once influence Tumblr badly?

Eventually, in 2o18 on 17 December, Tumblr banned pornography and adult content. This led to a lot of backlash from LGTBT users, sex-positive users, and NSFW art communities - resulting in a loss of a fifth of its users.

No doubt Tumblr was once an industry leader in social media with millions of active users. While Tumblr’s overall users have dropped over the decade, it is still popular among Gen Z. According to their spokesperson 48% of the users on Tumblr are teenagers. Although TikTok is the latest social media giant, many youngsters use Tumblr for microblogging and sharing artistic content. Tumblr business offers a hidden opportunity to businesses to increase brand awareness and reach a more dynamic audience. However, it is most suitable for business with a young demographic.

To conclude, Tumblr may not be a top social media app today but it still attracts young users. In today’s competitive digital marketing ecosystem, Tumblr is a great opportunity to attract Gen Z. So, if you have a quirky product/service and want to attract the dynamic young generation then you should promote your business on Tumblr.

Thank you for your comment. We will review it within few days.
You May Also Like
Viral Video Marketing: Everything You Should Know

Every dreams of creating a viral video for promoting product or service. In this article, you will learn the secret of viral video marketing.

How to use Omegle on Android/iOS Phone

We have given you a low-down on ten funny Tiktok Omegle videos that will make you laugh your head off. You also learn why TikTok baned Omegle links.