How to Record Super Slow Motion Videos on Your Phone?

Super Slow Motion has long been among the finest (and most exploited) video effects. The method was initially limited to high-end lenses, but super slo-mo has become increasingly superior as smartphone technology advances.

Super slo-mo is a terrific technique to learn how to use if you want to accentuate a dramatic moment or extend the humiliation of a friend you captured in an embarrassing scenario. This article has stepwise guides and tips for recording super slo-mo on your phone. Let's get going!

Part 1: What's the Difference Between Slow-Mo and Super Slow-Mo?

You'll understand the difference between the Slow-Mo and Super Slow-Mo better after reading the below information:

Video is produced at an 8-times slower rate than usual, equivalent to the speed of a movie, advertisement, or sporting event.

Slow-motion video is often created by filming at a fast frame per second (fps) speed and then playing back at a far slower pace. This results in intriguing videos with slowed-down motion. The event is captured at 960 frames per second with the Super Slow-mo function, four times quicker than conventional slow motion. When it's replayed at 30 frames per second, it's 32 times slower, making mundane moments appear spectacular.

To capture super slow-motion videos with your Samsung Galaxy S20 and later models, follow the instructions below:

Step 1: Launch the camera on your phone by tapping the Camera app.

Step 2: Now, click on the Super Slow-Mo option to proceed.

Step 3: Press the White Circle in the center to start the recording and press it again to stop when you are done.

Note: Make sure that your phone's video resolution is already on HD because Super Slow-Mo only supports HD resolutions.

Only capturing the super slow-motion videos is not enough, especially if you are a content creator. Even in the super slow-mo, there might be some unnecessary parts (since it is more detailed) that you need to cut out or the parts that need some enhancements to make the video look captivating.

Step 1: Open the Camera app and navigate the super slow-mo video you wish to edit.

Step 2: Now, play it and tap the screen. You will see three vertical dots in the right corner. Click on them.

Step 3: Select the Editor option from the dropdown menu that appears.

Step 4: After that, you can adjust the length, crop the video, add effects, add stickers, add music, etc., by selecting from the bottom menu.

Step 5: After you're done editing, click on the Save option at the top to save the video to your Gallery. 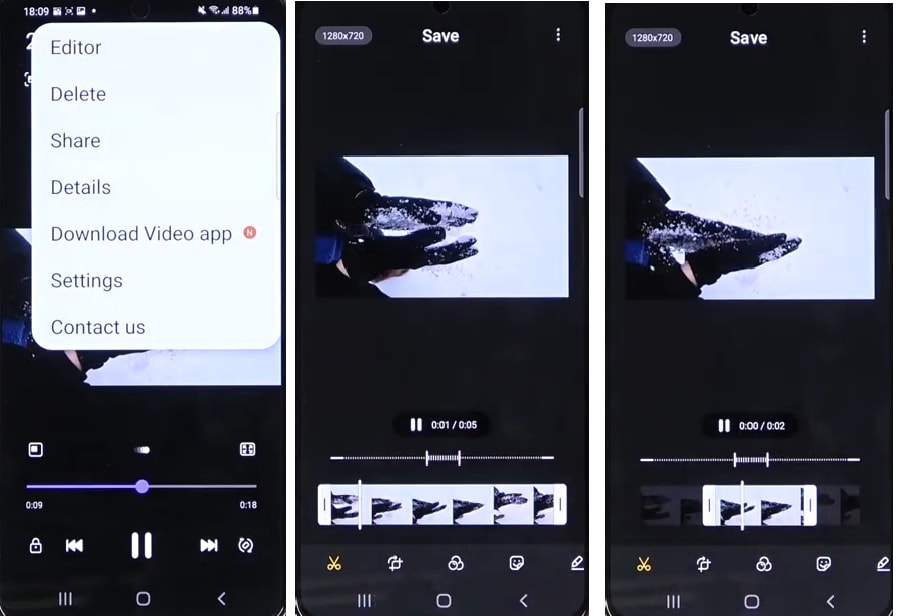 Before we demonstrate how to capture a super slow-mo with a Huawei Mate 20 and later models, we'll explain this popular capture mode.

To begin, you should be aware that a camera/camera sensor collects a specific number of frames per second. The movie becomes legible by combining these pictures; the more images there are, the more fluent the video will be. The naked eye is thought to decipher about 60 pictures every second.

The benefit of improved camera sensors is that you can capture a maximum number of photos per second (some smartphones can record up to 960 / second) and slow down the sampling rate to produce a super slow-motion effect on the Huawei Mate 20 or later models.

Step 1: Launch your phone's Camera go to More to select the Slow-Mo option.

Step 2: By default, you will see 4x on the slow-mo capture mode, which means the video will be recorded at 120FPS. Huawei Mate 40 allows you to capture up to 128X, i.e, 3840FPS for fast moving objects. To enable the Super Slo-Mo feature, select the 32X or 128X in this mode.

Step 3: Click on the Circle in the center to start and stop the recording. The video will be saved in your Gallery.

Part 5: How to Shoot Slo-Mo Videos on iPhone?

Slow-motion film on your iPhone essentially means slowing the fps so that everything appears to move slower inside the video. It is a popular effect employed by artists to produce one-of-a-kind video clips of sports footage, natural scenes, or sequences with a lot of dramatic motion.

Slow-motion films are supported by all iPhones, beginning with the 5S model, and the capability gets more robust and more stable with each successive generation. Shooting slow-motion films with your iPhone are addicting and enjoyable, and it adds drama to various settings.

Here is a step-by-step method for filming slow-mo with an iPhone, regardless of model.

Step 1: Launch the Camera app on your iPhone and go to the Slow-Mo effect by sliding from the options above. Change the frame rate on the upper right corner to 120, 240, 720, depending on the iPhone models you’re using.

Step 2: Now, start the recording by clicking the Red Circle in the center or either of the Volume button.

Step 3: After you're done recording, press the Red Circle again and head towards the Gallery to view the recorded video.

For more details, check: How to make slo-mo video on your iPhone.

Although super slow-motion videos are easy to record, they can be challenging for a content creator. But don't worry, with the following tips, we have got you covered:

It's critical to keep your phone as steady as possible when filming in Super Slow-mo since shaking might conflict with your video and hinder it from recognizing motions when set to auto-record. To get the most out of Super Slow-mo, we recommend using a tripod whenever feasible.

You can check these tripods for iPhone

Transition Between Single and Multi-Takes

To boost your chances of catching the ideal timing in Super Slow-mo, your phone allows you to record in Multi-Take mode, which can capture many bursts of Super Slow-mo in one video.

When combined with an auto record, additional Super Slow-mo videos will be captured as much as the focus box senses activity and will end only when you end filming. The manual record works similarly. However, you'll have to physically hit the trigger each time you wish to record a picture in Super Slow-mo.

As the name indicates, Single-Take will record a single Super Slow-mo clip and then cease recording a moment or two later. Because Multi-Take clips are often more extensive, this could save a large storage capacity.

The focus or auto-recording is tiny by default. Fortunately, you can enlarge it to improve its odds of recognizing movement. To adjust the size of the box, hold it until only its edges are visible, then move any corner from the others to expand the box's area. Simply tap anywhere outside the borders to verify the adjustment when you're happy with the size.

Because of the large number of frames it collects, Super Slow-mo works the best in natural daylight situations. Though not visible to the human eye, indoor lighting, especially LED bulbs and tiny fluorescents, seems to flash at very high rates. Even if the environment is well-lit, Super Slow-mo detects this and shows your subject in a substantially darker tone.

View the Video at Normal Speed

If you wish to watch your Super Slow-mo movies at regular speed, deactivate Super Slow-mo playing by tapping on the option directly below the video. This will give you a greater understanding of your phone's incredible capacity to bring the world to a halt.

Learn more about: How to Convert normal video to slo-mo video?

Besides the tips mentioned above, you can also watch this video to get some tips and tricks in recording slo-mo video with iPhone.

Super Slow Motion videos are excellent for showcasing the action and conveying tales, and they are also entertaining and straightforward to create. Your only constraints are time and imagination. However, your Android or iPhone's camera has many more tricks in its sleeve: Live images, time-lapse, Panoramas, and Portrait mode let you express yourself freely!