It's funny because it's true. We love memes because they make us look at things from the bright side or at least they make us laugh about things that are painfully true. There are so many different types of memes, from cat and doggo memes to memes that offer a different perspective on classical art.

Creating an unforgettable meme requires inspiration, and inspiration can strike at any moment, so if you don't want to forget a potentially viral meme, we have chosen some of the best meme maker apps that you can install on your Android or iOS Smartphone.

If you want to create a stunning meme video on Windows, Mac or Linux computer, you can try our free online meme maker, but to add some cool effects to your memes, you definitely need to try our Filmora video editor. Watch the video tutorial below to find out how to make an interesting meme with Filmora.

Choosing a meme generator is not easy because there are simply too many great apps for both iOS and Android devices that let you have complete control over the entire process of generating a meme. We've selected the 12 best options that are currently available on GooglePlay and AppStore. 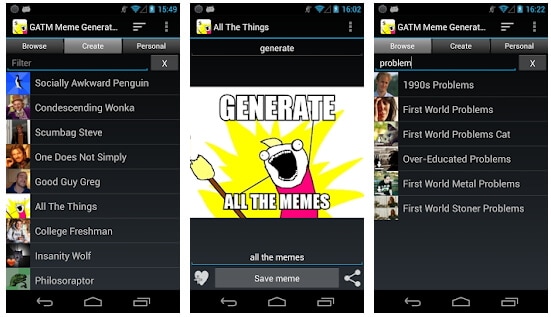 Besides being a powerful meme generator this app also offers an easy way to discover new memes. The browsable content is updated daily, so you'll always be in touch with the latest meme trends.

The app features a huge template library, and you can upload your own images too. The GATM Meme Generator can be downloaded for free, but the text formatting tools offer only basic options. All generated memes are watermark-free and they can be shared on Facebook, Twitter, or numerous other social media platforms directly from the app.

Over 100.000 installs on Google Play show just how good this meme generator really is. Mematic is designed to create memes quickly and effortlessly, so you can just add captions and share the meme with your friends.

The app only offers basic text formatting tools, and there are no photo editing options. However, downloading Mematic for free will enable you to gain access to hundreds of classic meme pictures to which you can add your captions. The app's interface is intuitive so you won't have any problems making memes, even if you never used the Mematic app before. 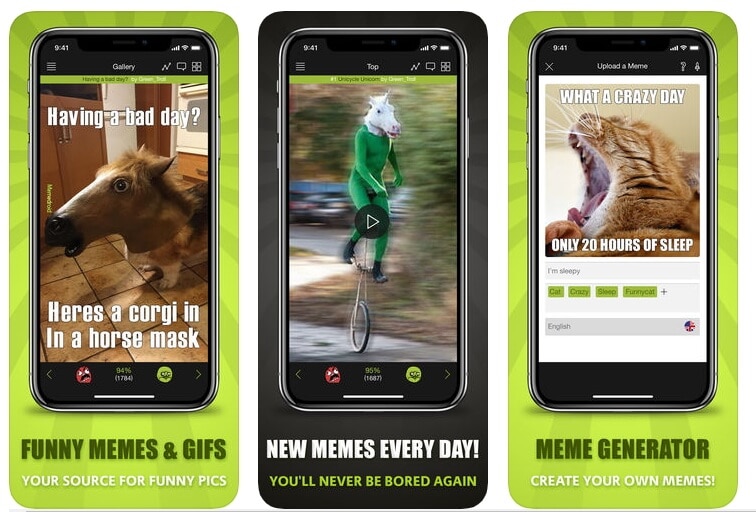 Memedroid is both a meme generator and a community of people who enjoy a good laugh. It features a rich meme template library and just basic text tools. There are very few extra features other than support for uploading your own images and GIFs.

Despite this, the Memedroid app is a great source of new meme templates because the gallery is constantly updated. If you decide to install this app on your device, be prepared to deal with annoying ads on a regular basis. Don't be too surprised if the app crashes while you are browsing through the latest memes. 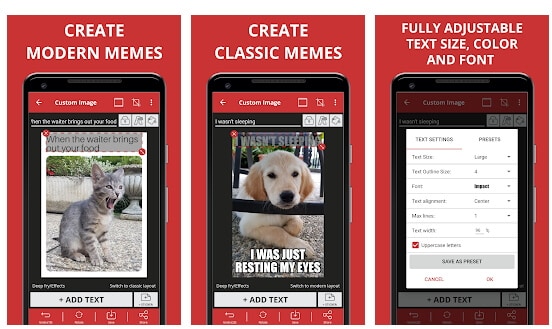 Neatly organized memes into separate categories, stickers, excellent file sharing features, and memes without watermarks are only a few reasons why the Meme Generator Free app is so popular. As its name suggests, you don't have to pay anything to install the app and use its library that has over 700 memes.

You can choose the size of the header and footer, use a font you like, or crop images in just a few easy steps. The only unpleasant thing about this app is the ads because every other option makes the meme-generating process fun. 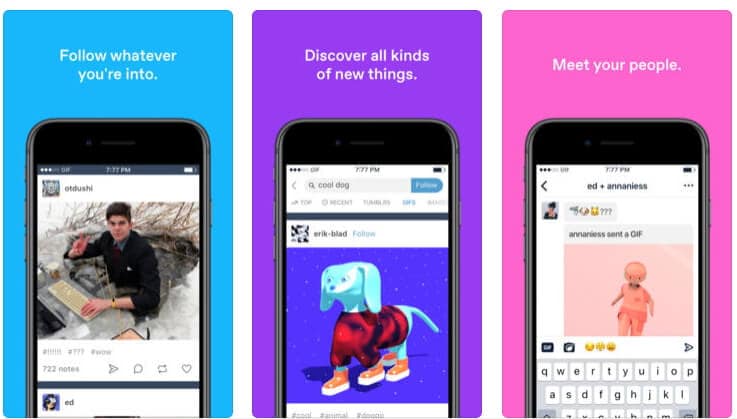 Tumblr is a social network, so you can create an account and post images and videos on your profile. The app for iPhones and Android Smartphones features a GIF editor as well as photo editing options. You can customize text by selecting the font, the size and the color or add as many stickers as you want to your memes.

Besides memes, you can use Tumblr to discover all types of images from pet photos to cars or fashion photos. All memes must be first posted to this social network before they can be shared on your other social media channels.

The coolest memes are always GIFs, and if you want a powerful app that lets you manipulate moving and still images then ZomboDroid's Video and GIF Memes is one of the best options. You can customize the text in any way you want while the app also lets you combine videos, GIFs, and photos into a single file.

The library contains millions of GIFs you can freely use to create your own hilarious memes. You can control the frame rate, speed or repetition of each GIF you edit with this incredibly fun app.

Curate your own collection of memes or create new memes using the Meme Creator's rich library that contains over 600 memes. The color of the captions and their size can be easily adjusted to meet your aesthetic demands. There are more than 20 different fonts available and you can also combine memes to create comics.

Meme Creator lets you share memes on all popular online destinations, which makes it a great choice for all Android owners who post fresh content every day on multiple social media profiles.

Share memes in three simple steps. Choose a picture, add a caption and share a meme on any popular social media platform. Meme Producer lets you combine several images in a single meme and enables you to change a caption with a single tap.

Captions generated with this app can have more than one line, which is great if the text you want to add contains more than two sentences. The app can be downloaded for free from the AppStore and it contains no ads or watermarks.

The app lets you browse and use over 200 free meme templates. You just have to select the meme you like and decide which color or the size the text is going to be. You don't have to worry about the length of the caption because the multi-line feature is available.

If you want, you can add watermarks to memes, although watermarked memes are not particularly popular. The best part is that Modern Meme Maker supports Instagram's upload requirements, while it also lets you share memes on Twitter or Tumblr.

With more than 4 million users and an extensively long list of memes, this app is among the very best meme generators for iPhones. Changing the text requires you to just tap on a meme you like, while you can also add faces or hats to images you're editing.

The text formatting tools are not as powerful as you'd expect from an app that offers so many other cool features. All images can either be saved to the camera roll or shared on Facebook, Instagram, and other popular online destinations.

Making a meme is about imagination, and having a sense of humor, but you also need a powerful tool that lets you express your ideas in the exact way you want. A good meme generator app will help you forget about the technical side of the meme-making process so you can focus on what is truly important. What's your favorite meme generator app for iOS or Android devices? Wanna be more creative in making memes and level up your video editing experience, download Filmora for free and make memes and videos with fun.

Thank you for your comment. We will review it within few days.
You May Also Like
15 Best Meme Generators [Online, PC & Mac]

To meme or not to meme, that is not the question because everyone is already doing it. The real question is how to meme. In this article, we will show you some sort of a tool or a so-called meme gener

We've composed the list of best GIF Recorders for PCs. Take a look at some of the most powerful software products for creating animated GIFs on Windows.

If you want to join in the fun, then you can always contribute to the web’s growing collection of memes. This article will show you how to create both image memes and video memes online and offline.