Download on the App Store
Get it on Google Play
Download
Download
Call us: +1-60-4343-8521
Mon-Fri 6:00 PM to 11:00 AM Pacific Time
International phone rates may be charged by your service provider
Filmora Video Editor
Add Games of Throne 3D LUT to Video with One-Click
Try It Free Try It Free

As the battle against Whitewalkers rages on the faith of Westeros remains uncertain. Besides a plot that is full of betrayal and unexpected twists and turns, the show is also famous for its breathtaking aesthetics. The scenes that take place in the North or Beyond the Wall have distinctive bluish, almost de-saturated tones that intensify the cold atmosphere of the environment.

If you are a fan of the Game of Thrones series and you’d like to learn how to replicate its visual style in your videos, or make the same style intro for your YouTube video, or create the stylish titles, you’ve come to the right place, because in this article we are going to show you how to do that. So, let’s get started.

Part 1: How to Add Game of Thrones Visual Effects to Video?

1. Using Free LUTs in Filmora to Create Game of Thrones Effects in Your Videos

There is an easier and faster way of replicating the visual style of Game of Thrones episodes that take place in the Northern part of Westeros, if you find the color grading process in Adobe Premiere Pro CC or Adobe After Effects too challenging. Wondershare’s Filmora lets you create the GOT style videos effortlessly. Once you’ve created a new project and added the media files to the timeline, you should just double-click on the video clip you’d like to edit. The Editing tab will appear in the upper left corner of the Filmora’s interface.

Click on the Color tab, and scroll down to the 3D LUT menu. This option is going the be disabled by default, so you have to click on the appropriate checkbox to enable it.

Browse through the 3D LUT drop-down menu until you come across the Game of Thrones LUT, then just click on it. The LUT will be automatically applied to the entire video clip, and make it look like the famous TV show. 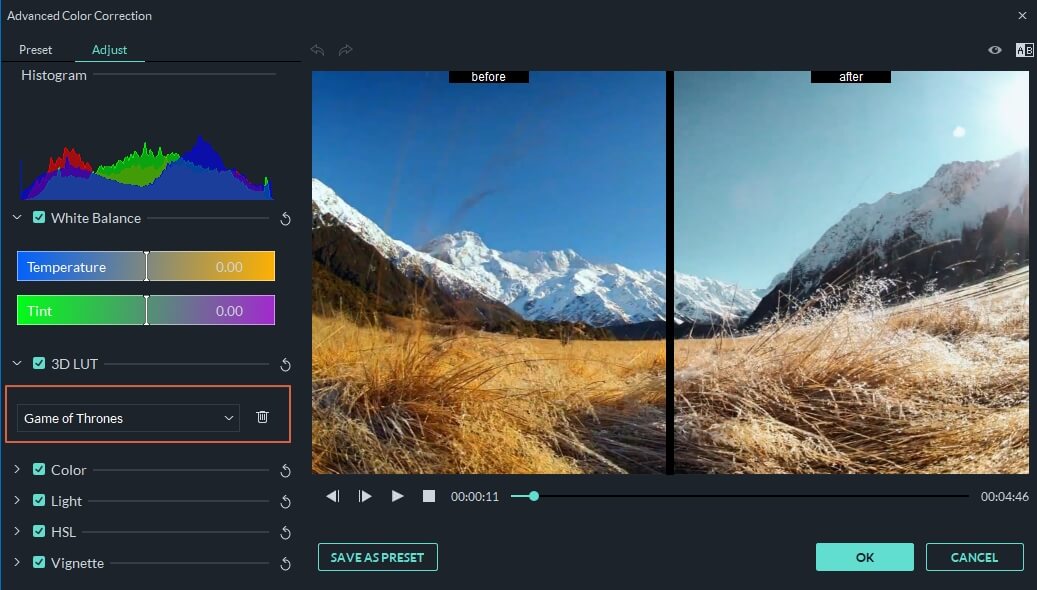 Filmora also features powerful color correction tools that you can access by clicking on the Advanced button located in the lower right corner of the Editing panel. The Advanced Color Correction window contains Color, Light or HSL menus that provide all tools you’re going to need to fine-tune the Game of Thrones LUT you’ve applied to the footage. You can click the A/B button on the upper right corner to check the comparisons before and after applying GOT LUT effects.

Hit the Save As Preset button once your video clip starts resembling the source footage from a Game of Thrones series and proceed to apply the preset to other clips you’re using in the project.

Filmora is an easy-to-use yet powerful video editing software for all creators. You can check the video below to find how it can empower your imagination.

2. Creating the GOT Visual Style with Adobe Premiere Pro

Different versions of Adobe Premiere Pro offer multiple methods of color grading the footage, and the actual steps of recreating the GOT visual style depend on the version of the editor you’re currently using. Recent versions of the Adobe Premiere Pro CC feature the Lumetri Color Panel that enables you to adjust the Brightness, Contrast, Tint or Saturation of a video clip. The older versions of Premiere Pro offer a range of Lumetri Effects, that you can also use to add a bluish tint to the footage that the resembles the GOT visual style.

Before you start color grading the footage, you should select a few shots from one of the GOT episodes you’re going to use as a reference throughout the process. This will make color grading easier because you are going to be able to compare the colors in your video to those from the source material. After importing the footage into a project in Adobe Premiere Pro CC and placing it on the timeline you should click on the Effects and search for the Lumetri Color option. 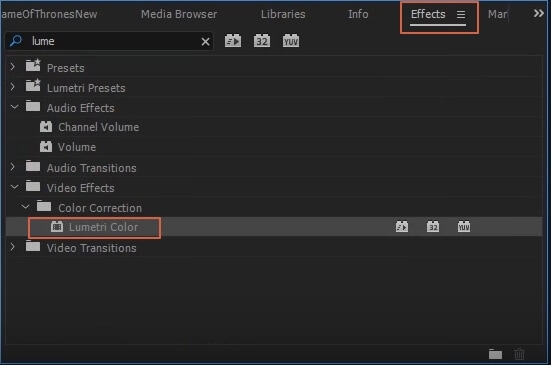 Then you will see the Lumetri Color Panel in the upper right corner of the screen. The panel contains Basic Correction, Creative and Adjustments menus, among numerous others that enable you to manipulate colors in any way you see fit.

In order to recreate the GOT visual style, you will have to highlight the blue tones and quiet down the red tones. You can do this by desaturating the footage slightly, adjusting the Temperature value, increasing contrast and lowering brightness or setting the Tint to the shade of blue that is the most similar to the one in the shot you’re using for reference. Nearly all color correction tools you can find in the Lumetri Color Panel can be used to replicate the visual style of the GOT series, but the exact video editing tools you’re going to use to create the GOT style videos and their values depend on the video clip you’re working with. 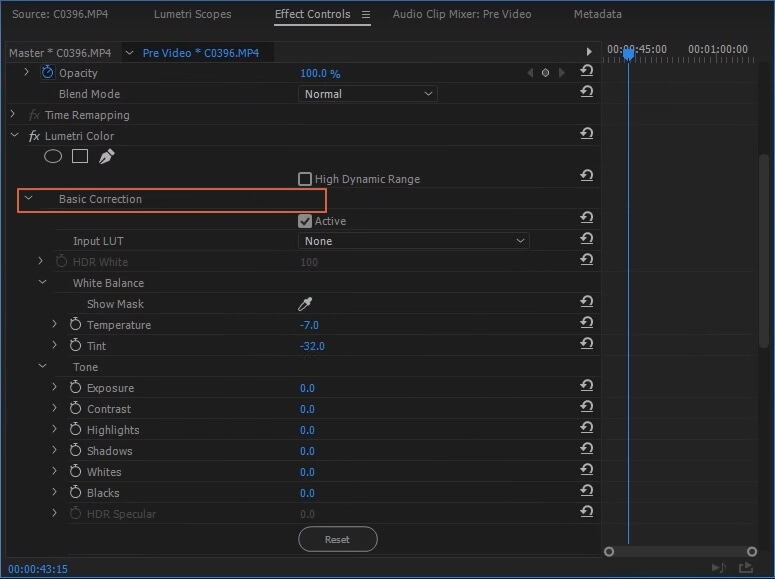 Besides the basic color correction tools like Tint, Exposure or Highlights, you can also use the Color Wheels to fine-tune the colors in your videos to resemble those in the Game of Thrones series. Once you have the result you really like, you can save it as a preset in order to apply the same corrections to all the shots in a sequence or an entire video. Moreover, Adobe Premiere Pro CC features a number of Lumetri Looks, built-in color grading presets, you can use as a starting point in the color grading process.

3. Create and Apply the GOT Visual Style in Videos with Adobe After Effects

The Lumetri Color effect in the Adobe After Effects contains all the video editing tools like the Lumetri Color Panel in the Adobe Premiere Pro CC, which means that the steps of recreating the GOT visual style are also similar. If you don’t have a lot of experience with color grading, you should also use some source footage for reference, as it will make it easier for you to spot how similar the end result is to the actual GOT footage. You won’t have to change the workspace in After Effects in order to start using the Lumetri Color option because you can just type the name of the effect in the search bar in the Effects panel and apply it to the footage you are color grading. 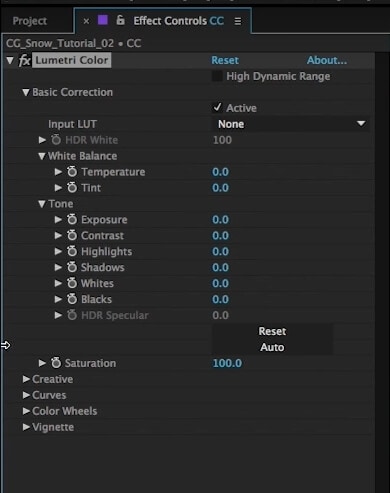 Fine tune the Lumetri Color’s settings in the Effect Controls panel, and after you perform the basic color correction by adjusting the Tint, Brightness, Contrast or Saturation values, you can use the Creative menu or Hue, Saturation and Color wheels to further alter the colors of the original footage. 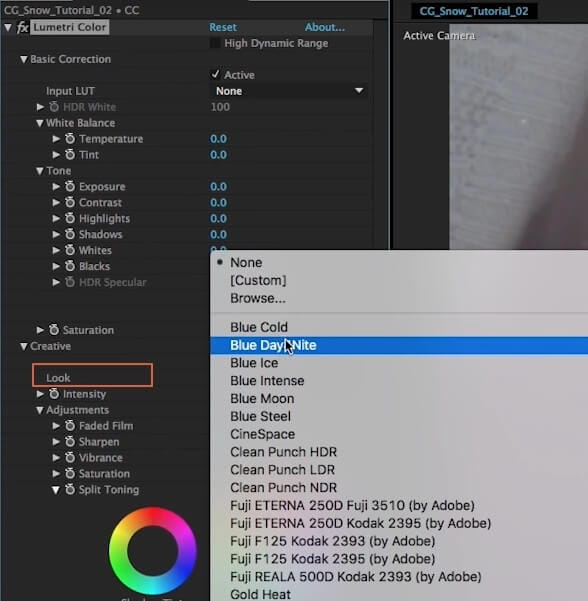 You can also apply Lumetri Looks to a video clip you are editing, although reducing the intensity of these presets may be necessary if you want to recreate the GOT visual style. When done, create a new Lumetri Color preset so that you can apply it to multiple video clips.

Part 2: How to Create Game of Thrones Similar Intro?

There are some online intro makers specifically for Game of Thrones style.

This free Game of Thrones Intro Maker allows you to create your intro in the Game of Thrones Way easily. Follow the instructions on the website to select animation color, type the slogan and information, and at last enter your email address so you can get the video link. However, you can’t preview the final result after entering all the elements. 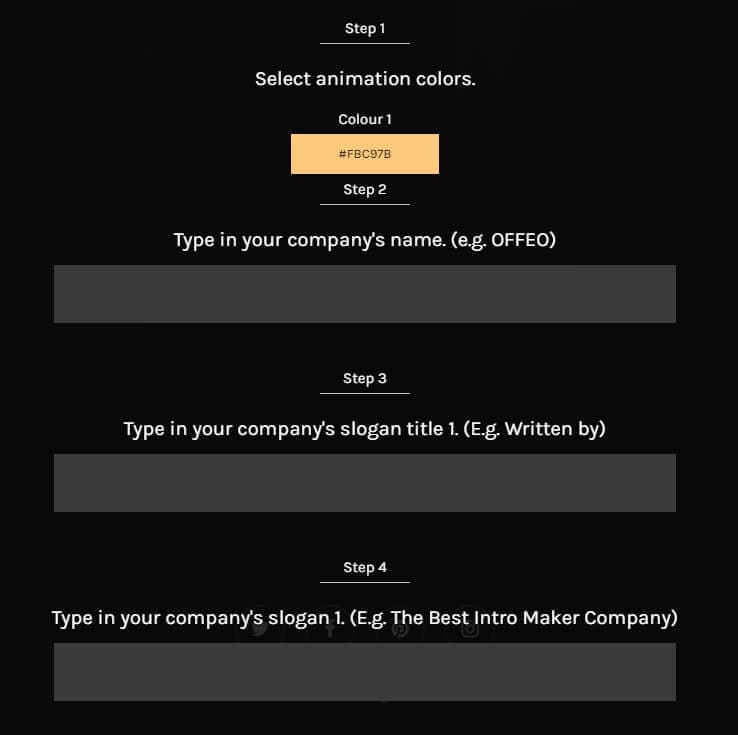 This online intro maker allows you to create your own Game of Thrones intros in minutes. You can customize the text or add your own audio to the intro. This GOT intro will last 10 seconds and present 3 texts. It is in 16:9 widescreen aspect ratio and provides 1080P and 720P resolution. You can preview the GOT text result before you pay the order. 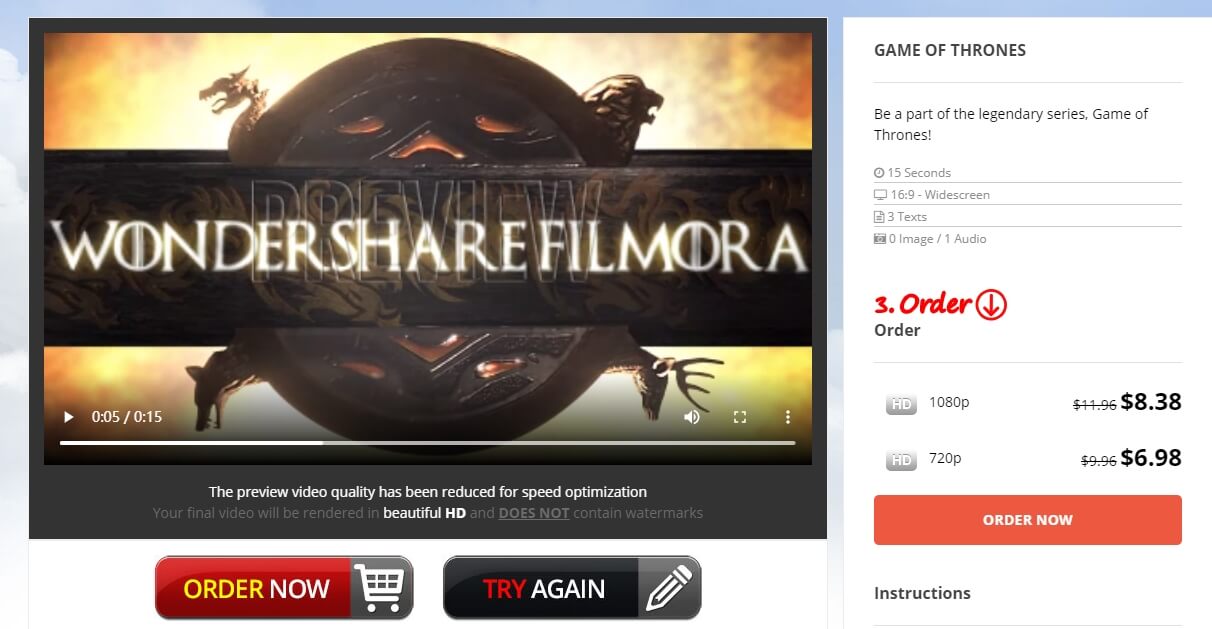 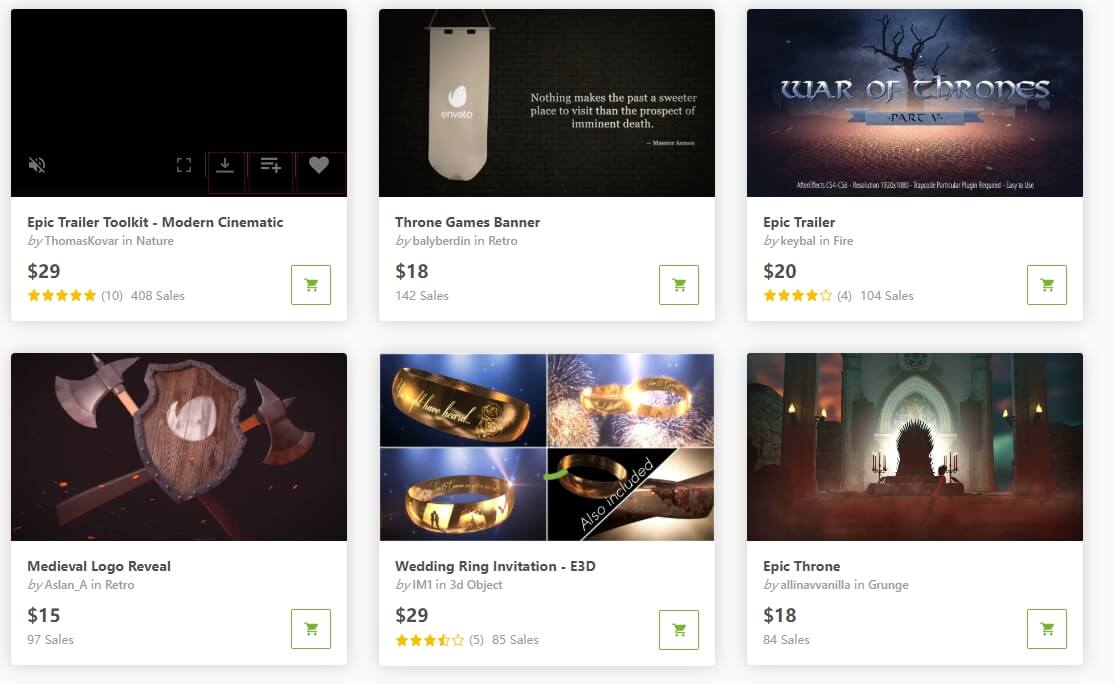 Currently, there are several games of thrones after effects templates available in videohive. You can create cinematic titles or trailers, make your own logo in the GOT style. When you download or purchase the Game of Thrones templates, please check its compatibility and the elements included. Some of them can only be used on After Effects, some of the duration is short. The price various from 10-40 US Dollar.

3. Download Title Sequence Template of Game of Thrones on creatorgalaxy.com 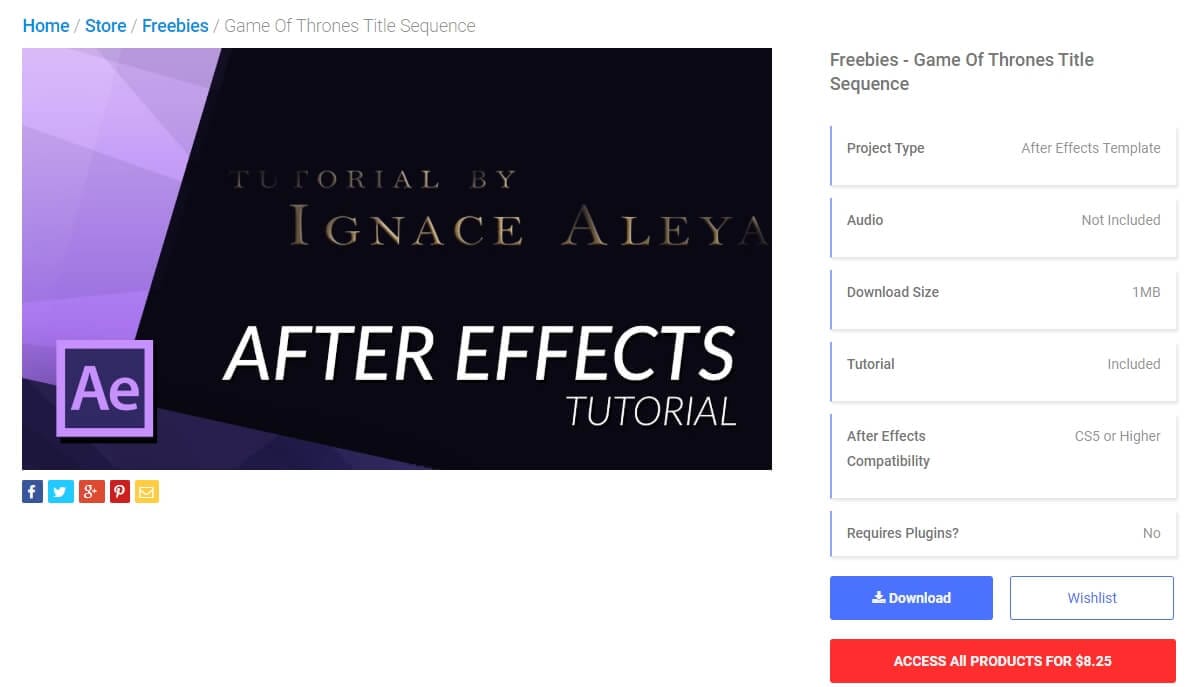 Recreating the visual style of GOT in Adobe Premiere Pro CC or Adobe After Effects can take some time since you have to use several color correction and color grading tools to create a video that has the Game of Thrones aesthetic. Filmora offers a more straightforward way of highlighting the blue tones in a video, as you just have to apply a Game of Thrones 3D LUT to the footage and try out different Hue, Saturation or Contrast values in order to get the colors just right. You can also create the Game of Thrones style intros, titles, trailers, logos, or icons with some video effects templates and online makers. How do you create your Game of Thrones style video? Leave a comment below to share it with us.