YouTube is one of the top online learning platforms that ever existed. You could learn almost anything on YouTube just by ardently following through the videos with rapt attention, intent, and understanding. However, the degree to which you know effectively can hamper if the video you watch is too fast.

More so, you could want to save time while playing your choice YouTube video and yet wish to get all the information. You can eat your muffin and have it by speeding up or slowing down the YouTube playback speed. This article will show you how to speed up YouTube videos or slow them down.

Part 1: How to Change YouTube's Playback Speed on Computer

To fast-forward YouTube playback videos or slow it down on the computer, you must follow the proper steps. Changing YouTube's playback speed on a computer is not a complex thing to do. You can achieve it if you follow the steps we will show you.

On the website, you can manually alter the YouTube video's playback speed with your computer while watching it. 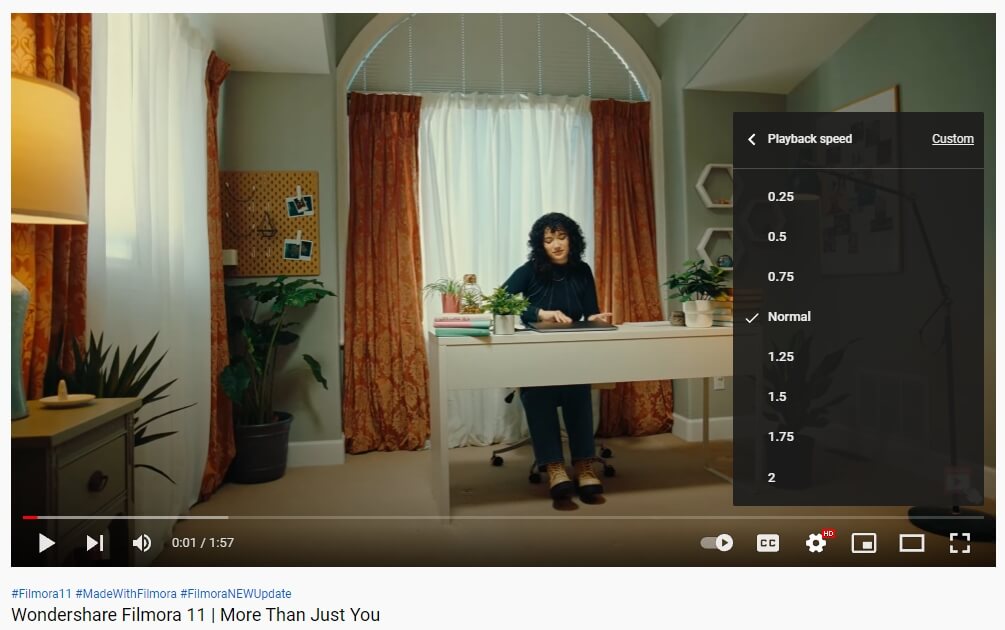 These are preset speeds. If they are not suitable for you, you will have to select a custom speed, but they must be in the same range of 0.25x to 2.0x.

To do this, go back to playback speed. Select custom in the top-right side of the pop-up menu, then adjust the speed using a slider that you will see there.

Part 2: How to Change Video Speed with Keyboard Shortcuts on YouTube

If you are watching a YouTube Video on your computer and want to adjust the playback speed, you can change the speed with keyboard shortcuts.

Here's another way to adjust the playback speed of YouTube videos more quickly.

To fast-forward the YouTube video, press your shift button and hold down, then tap your greater than(>) symbol on your keyboard. Your YouTube playback speed will increase by 0.25 as you keep tapping.

To reduce the playback speed YouTube videos, the reverse is the case. Press and hold down the shift tab, then tap less than the (<) symbol.

Changing the playback speed using these keyboard shortcuts increases by 0.25 increments. You have to use custom if you want other values, as earlier mentioned.

The best thing about this method of changing the speed is that you can do it while watching the movie or while paused.

Part 3: How to Change YouTube's Video Playback Speed on Mobile

If you'd like to know how to speed up YouTube videos on your Android, iPhone, or iPad, here's it.

First, you must open your YouTube App on your device and play the video you want to watch.

Then tap the video once, and it will bring up the toolbar.

At the top right corner, select the vertically aligned three dots. This will bring out a menu for you—select playback speed. 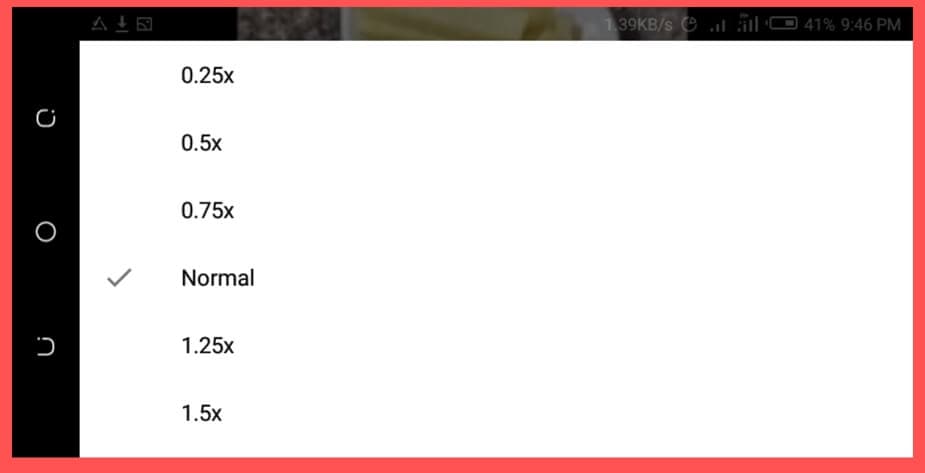 1 is the average speed. Any value below than 1 will slow down the video, while any value above it will increase it.

Once done, close the menu, and the video will resume from where it stopped.

YouTube has an added feature known as 'playback speed.' This feature allows you to select a speed from 0.25x to 2x the normal speed. With this YouTube's speed control, 1 is the normal speed, with 0.25 being one-quarter (1/4th) of the actual speed and slowing the video. In the same vein, 2x is twice the average speed, increasing the video speed.

However, in as much as YouTube speed control slows or speeds up the video, it does not change the pitch of the video. All it does is either expand or compress the video samples while still maintaining the video or audio pitch. It would still sound like the podcaster or video blogger is just talking faster or slower.

Music would still maintain the same musical key and pitch while playing faster or slower.

If you are watching a presentation or interview that seems like everyone is talking like they have all the time in the world, you can fast forward YouTube video by using the feature.

Also, you can slow down a tutorial or the video you are watching if you feel they are too fast using this YouTube speed control.

YouTube speed control has made it easier to change YouTube playback speed to either speed up or slow down the video. This enables you to capture important moments or information you may miss if the video was fast. Also, you can save time and get to the information you are searching for as soon as possible by speeding the YouTube video.