Minecraft is one of the best open-world games that lets its players perform several different activities. These activities include creating houses and buildings, exploring a world full of mysteries, finding unique creatures, and much more. But one of the main and widely played modes of Minecraft is the Survival mode. It lets several different players compete with each other and the mobs that are in this world with the help of different tools and weapons. A crossbow is one of the best long-ranged weapons that enable the players to hit the enemies from a distant place. To win a fight, it is important to have the most powerful weapon.

Multishot is one of the best Minecraft crossbow enchantments that allow players to shot three arrows instead of one at a time. It helps players kill mobs or other players faster and easier. The maximum level of this enchantment is one. You can't increase its level. It will only require one arrow for a single shot but can throw three arrows at a time. Just like all other enchantments, there are pros and cons to using this enchantment. Each time you shot the arrow, it takes three durability points instead of one, which makes the bow wear out quickly. Instead of this drawback, it is one of the best enchantments that you can use to kill multiple enemies while battling. If we compare its advantages with its disadvantages, they oversee them in all points.

Piercing is another amazing Minecraft crossbow enchantment that lets the players pierce the arrows through several surfaces, objects, or mobs. With piercing enchantment, the players can hit several mobs or players with a single arrow. It is a very helpful enchantment to hit the mobs or players that are hidden behind an object. It comes with a maximum of four levels. Each level lets you penetrate one object or layer. With maximum levels, which is four, you can pierce through four objects or mobs at a time. To hit multiple mobs in a single shot, it is important to bring them in a row, which is usually not possible. In such cases, this enchantment is of no use or useless. 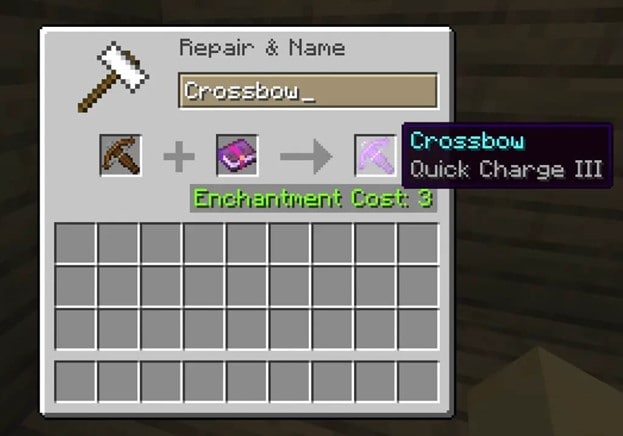 The Quick Charge enchantment is another marvelous Minecraft crossbow enchantment that helps you load the crossbow quickly. While fighting with other players or mobs, using a crossbow can be a good option. But loading the arrow in the crossbow takes a lot of time, which can cause the player to come closer to you and harm you with a melee weapon. Which makes the use of the crossbow a very bad decision. To get the most out of a crossbow, you must use this enchantment with it. It can decrease the load time by 0.25 seconds with each level. And you can increase the level of quick charge enchantment up to three levels, providing you with a decrease in the load time by 0.75 seconds, which makes it a very beneficial Minecraft crossbow enchantment. 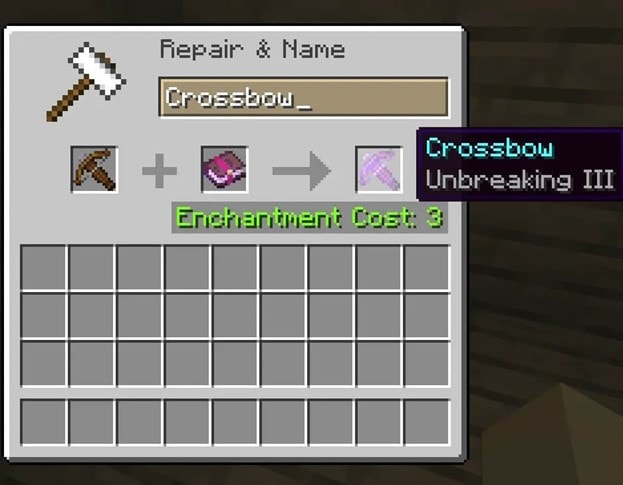 Unlike all other Minecraft crossbow enchantments, unbreaking will increase the ability of your bow or empower your arrow. Unbreaking will help you increase the durability of your crossbow. Because each time you throw an arrow with your crossbow its durability decreases and makes it weak and prone to break. But with this enchantment applied to your crossbow, the chances of being damaged or broken decreases to zero. It will let you through as many arrows as you without the fear of getting your bow damaged. This is an amazing enchantment for tension-free battles and fights. 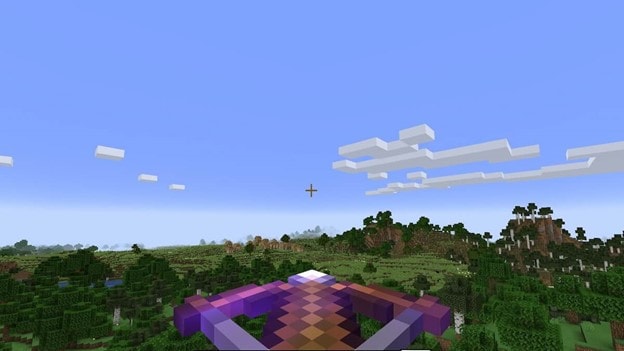 Just like Unbreaking, Mending Minecraft crossbow enchantment helps you avoid your bow from being broken or damaged. But the difference between unbreaking and mending is the use of XP. Unbreaking decreases the chances of your bow getting broken or damaged and on the other hand, Mending helps you repair your bow each time you kill a player and collect the XP. It used the XP to repair your bow and make it ready for the next battle or fight. The maximum level of Mending enchantment is one and it can't be found on the enchantment table, which makes it hard to attain and unique enchantment. It is one of the rare enchantments and players have to find it in the open world. 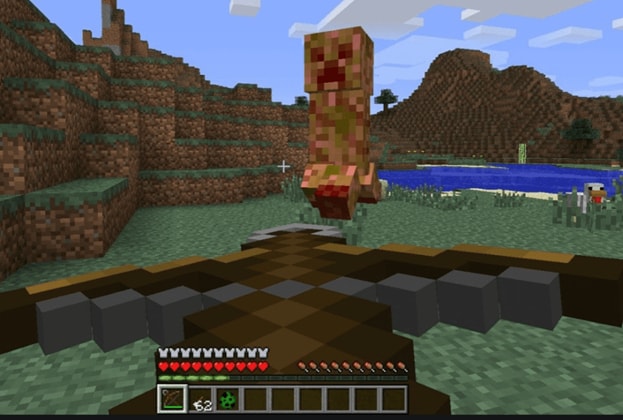 Surviving in the world of Minecraft and winning all the battles you fight requires the use of the full potential of the weapons you acquire and use. With all the above Minecraft crossbow enchantments, you can discover and use the crossbow to its fullest. Using the above enchantments can increase the chances of winning fights and make you strong against all your enemies and mobs. Choose the enchantment according to your requirement and start making the most out of your crossbow.