An easy and powerful video editor

Omegle is one of the internet's almost forgotten corners. The 2009-born video chat room site- a distant memory to some- comprises random lawlessness and unsolicited nude photos.

However, while its lawless reputation precedes it, its initial intended purpose still holds- a platform where you can meet like-minded individuals and have a meaningful connection in a lonely, isolated world.

With the global pandemic and subsequently worldwide lockdowns, Omegle saw a wave of popularity, with a monthly traffic increase of 10 million between February and May.

It is still unclear whether this renaissance was due to loneliness, boredom, a wave of early 00s nostalgia, or all three. Regardless, people seem to enjoy it now more than ever.

Omegle Moments on Tiktok: How Does it Get Popular?

The exciting part about Omegle, according to many users, is the unpredictability of it all. The site that can pair users in one-on-one chats randomly makes it more interesting. Users stick around for the curiosity of wanting to know who will come next on your screen. It just might be your favorite Tik-Toker.

With months of online learning and limited socializing, it wasn't a surprise when the site started seeing a resurgence, particularly among teenagers who feel alienated. With Omegle, the newness and the possibility of meeting anyone in the world seemed so much better than it would have before quarantine, thus attracting crowds to this site.

Recording these reactions makes for good content, and thus TikTok Omegle moments like these become popular on the platform. Additionally, even recording your interaction with a total stranger and possibly connecting on a particular topic is a welcome surprise seeing that the pandemic has left the world devoid of these connections.

Recordings of Omegle videos have become a revered part-time activity that has helped content creators produce content on different platforms and go viral. TikTokers have garnered millions of views on videos about different topics, including exploring Omegle's "adult" section (for people 18 and older), fighting cyberbullies on Omegle, playing dress-up on Omegle, pretending to be a celebrity on Omegle, sitting on Omegle for 24 and even 72 hours straight, and more. 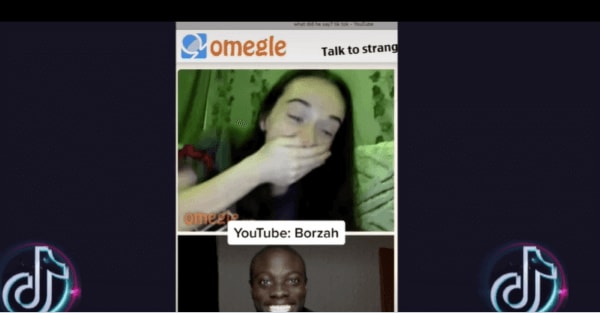 Unfortunately, like many things on the internet these days, Omegle has pros and cons. While Omegle's initial intended use was to connect the world, it was created by an 18-year-old (Leif K Brooks) 12 years ago with very minimal security procedures.

The app is free to register and does not censor or filter out child pornography, thus resulting in increased concerns about children's safety on the app.

The unregulated user experience and age verification on the platform have led to many underage children passing out as 'older,' thus having access to video chats making them even more vulnerable.

It is important to note, however, that users have a choice to have their conversations monitored or unmonitored. But of course, you may be exposed to inappropriate content when having unmonitored conversations.

TikTok found out in their investigation that although personal information is not shared on the platform, it is intolerably easy for sexual predators to pry that information out of an unsuspecting child and carry out harm.

With this revelation, Tiktok insisted on age restrictions and recommended various security protocols. Child safety was the major contributor to them banning TikTok Omegle links from their app.

Leif, the founder, while responding to the allegations, told BBC that his company had increased its moderation efforts in recent months. 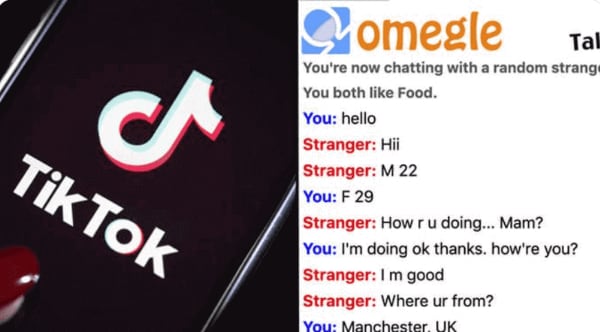 We'll look at ten of the funniest TikTok Omegle videos.

Popular Youtuber Satyr has made it a habit to meet his fans on Omegle. His video Omegle girls are crazy has 56 106 views, about 80% of his subscriber count of about 76 000.

He has already made a name for himself on Youtube, and he is something of a star as well, on Tiktok, where he has a little over 56,000 fans.

He is a Youtuber and a Twitcher. Famously known for his beatboxing, Liquid Candy's funniest video is one where he performs a magic trick of sorts and disappears from the camera while still on, live.

These strangers he connects with are left in awe of how he is capable of doing this.

The third Tiktok Omegle video starts with two girls saying hi to each other. However, things take a drastic turn when Pennywise, the clown, pops out on the screen across the room. All of this unfolds so suddenly. The other girl is scared out of her wits and disconnects.

The cycle continues but with two different strangers. In their case, one girl starts out doing the string cheese dance again, Pennywise, the clown pops on the screen, and the stranger disconnects. 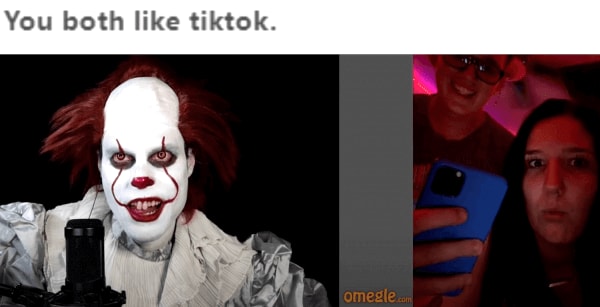 In line with Omegle's unexpectedness, this video shows a guy who is waiting for Stranger 2 to show up on his screen. However, the stranger puts on a show for him and dances, to the surprise of many.

All the people who connected with this dancer seem to have not seen the dance routine coming. The surprised looks on their faces were worth the show. Unfortunately, not many of them stuck around for the full show

This video shows an interaction between Eddie and a stranger from Omegle. After they exchange pleasantries, Eddie asks the stranger her name.

Eddie then reveals that she has a similar name to his girlfriend. However, he continues rumbling, to which Naomi interrupts him and asks him if he wants to know more about his girlfriend. Naomi then tells Eddie that his girlfriend is a Lesbian. stranger 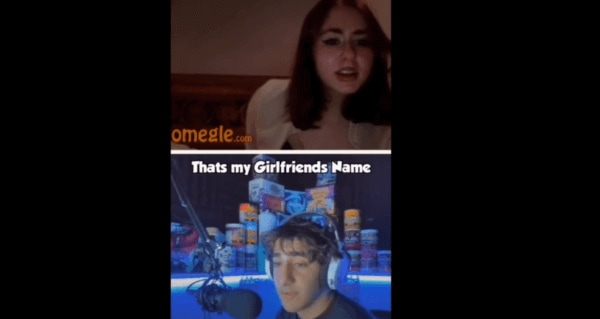 Justin Schmidt is known for telling people their IP Addresses, otherwise known as a hacker. In this video, Justin meets strangers and nonchalantly says their names, upon which the users are doubtful. He then doubles down and tells them their street addresses and then disappears from the screen. This video has 1.5m views on youtube and 5.6 million on Tiktok. 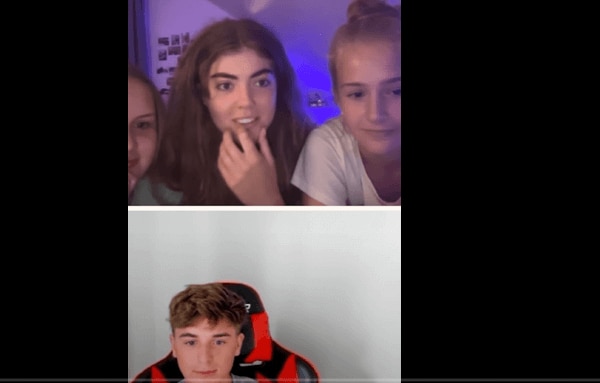 Dexterity is a Youtuber and gamer. In the video, he is connected with two girls. However, as soon as the girls connect, his 'cousin' shows up, and they make plans to go bowling. He then invites the girls on the screen to join. In a thick Eastern Europe accent, he nudges his 'cousin' for money to pay for the girls, an action that sends the girls in hysterics. 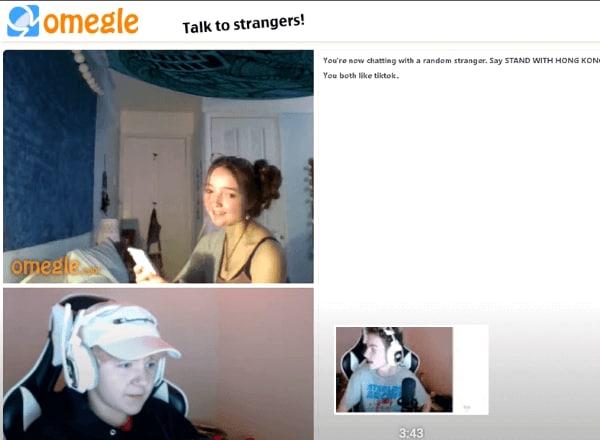 Sean is a famous Tiktoker who does magic and records it. In this video, Sean meets a girl on Omegle and asks for her name. He then exclaims that she has the same name as her girlfriend. He then clarifies that she is not really her girlfriend and just met. He then offers her a rose, to which the girl giggles and disconnects. 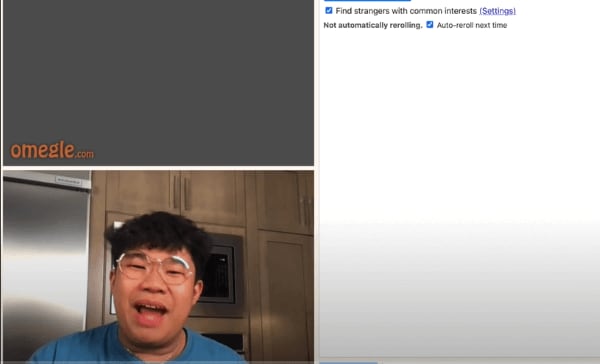 Official Davide is a Swiss/Italian singer. He is seen interacting with a very beautiful girl as he put on and proceeds to ask her if she can sing for her.

The lady is visibly shocked by what she hears and asks his Snapchat handle. The video has 14M views on TikTok and 145000 on Youtube.

In this video, the girl connects to a guy who seems to have natural googly eyes. However, she is fascinated by his eyes and asks him if his eyes are real.

She goes ahead to ask him to take off his glasses so she can be sure. The gentleman obliges and reveals that the glasses brought the effect to his eyes. She then compliments his good looks, and the guy blushes and disconnects. 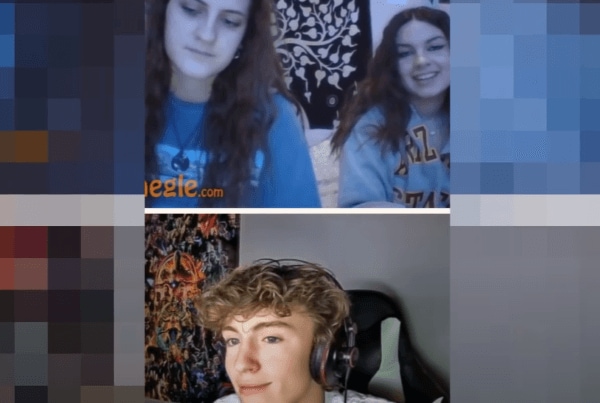 Bonus: Use Filmora to Edit Video for Tiktok Easily

If you want to create high-quality HD videos that will get loads of views on TikTok, use Filmora. This tool streamlines the video creation process and saves you a significant amount of work and time.

Filmora can help you produce eye-catching videos that your audience will fall in love with and watch again and again. This software allows you to improve the quality of your videos by changing video resolution and adjusting brightness, hue, and saturation. You can also edit audio, crop the video, or rotate it. Additionally, you can apply filters to your video and add effects to make it captivating.

● Now that you know about TikTok Omegle funny videos, you can also create your video and use Filmora to ensure it's of high quality. This tool can help you make videos that will go viral on TikTiko.