How to Take Screenshots on Xbox One

Four years have passed since the introduction of the third console in the Xbox family, and today gamers around the globe agree that Xbox One is one of the best gaming consoles ever created. There are thousands of video games you can play on Xbox One so it is hardly a surprise if you are wondering how can you capture and share game highlights or some of the stunning vistas in games such as Call of Duty or Battlefield.

Let's have a look at how you can take screenshots in video games you play on your Xbox One gaming console and how you can share them with your friends on social media.

Capturing Screenshots on Xbox One Using the Controller

An increasing number of video games for Xbox One can be played in 4K resolution, but in order to play a game in a 4K resolution, you must have a 4K TV set. Moreover, the 4K and HDR capabilities your TV must be enabled before you start playing an Xbox One game in 4K. Taking a 4K screenshot on Xbox One requires you to adjust the capturing settings.

Press the Xbox button on the controller, and locate the System menu. Select the Settings option from the System menu and then click on the Preferences submenu. Navigate to the Broadcast&Capture option and when the new menu appears on the screen, click on the Game clip resolution and select one of the available 4K settings.

Keep in mind that 4K screenshots are significantly larger in size than those in HD or any other resolution so if you would like to share a screenshot on social media you'll first have to download it to your Windows 10 PC and resize it. What's more taking screenshots or recording videos on Xbox One is only possible after you launch a game.

You can say ' Hey Cortana, take a screenshot' if your Xbox One features a Cortana motion sensor. However, in order to be able to issue voice commands, you must first activate this option. Head over to the Xbox One's Settings menu and locate the All Settings option. Click on System and switch on the AI Companion feature.

It is important to say the command clearly so the AI can understand what you are trying to do, and for that reason, you should try to avoid capturing screenshots or recording videos via voice commands in noisy rooms.

How to Manage and Share Screenshots on Xbox One?

Capturing screenshots of the epic moments in an Xbox One video game and sharing those images with your friends is equally simple. You can either share the images directly from the device or you can download them to your Windows 10 PC and share them from the computer.

The console you're using features the Upload app, so in order to access it, you should simply tap on the right bumper on the controller while you are in the Xbox One's home screen. Repeat this action until you are able to see the content feed your friends shared with you. Locate the screenshot you'd like to share and press the Menu button on the controller. A new window will emerge on the screen and you should simply select the Share option and then proceed to choose whether you want to send the screenshot as a private message, upload it to OneDrive or post it to Twitter. 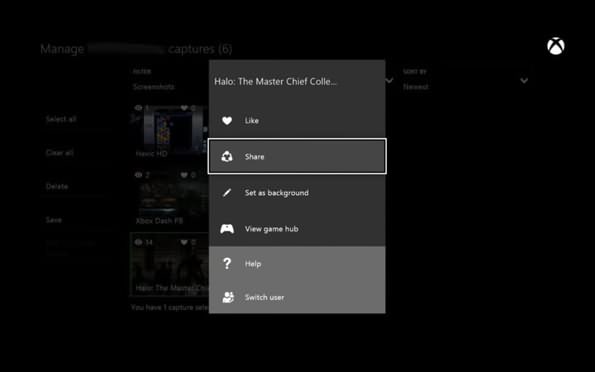 The Xbox app enables you to download and save screenshots to your computer's hard drive. The process is straightforward and it includes only a few simple steps. After you've installed the Xbox app on your Windows 10 PC you should open it and then you should click on the Game DVR option. Select the Xbox live feature from the DVR menu and proceed to choose the screenshots and videos you'd like to save on your PC. Click Download to complete the process.

Once the images and videos are saved on your computer, you can access them from the Xbox app. Once again head over to the DVR menu and select the On this PC option. Now you can select the screenshot you want to access and then just click on the Open Folder button. This will enable you to share your images via email or post them wherever you want on the Internet.

Gaming is one of the best forms of entertainment available to us, but it is even more fun if you can capture and share your accomplishments with your friends. Luckily, Xbox One makes this process quick and easy, since you can issue a voice command and take a screenshot even in the heat of battle.

What is your favorite method of taking screenshots on Xbox One? We're anxious to hear all about it, so let us know in the comments below.

If you have an Xbox one you may wonder why you need to get a capture card at all due to the fact that it already has recording and streaming capacities.Read this article to find out the best game card