How to Do Siri Voice on TikTok?

Wondershare Filmora is one of the best video editors to level up your TikTok video with stunning effects. Download and have a try.

TikTok has had numerous trends, and out of all, one trend that is gaining a lot of popularity is the text-to-speech audio effect. For iPhone users, Siri is not new. Siri helps them read text messages and much more, but soon after the text-to-speech feature was added in TikTok, it took the TikTokers world by storm. But since the voice sounded so much like Siri, people started calling it Siri voice rather than text-to-speech. This feature allows users to convert any text into a speech using an automated voice. And if you have never used the text-to-speech feature, this post will help you understand how to do the Siri voice on TikTok.

01 What is Siri Voice?
02 How to Do Siri Voice on TikTok?
03 TikTok Voice Changer Apps

Part 1: What is Siri Voice?

Siri voice in TikTok is basically an automated voice feature where the voice reads out the text on the video. The feature is called text-to-speech. So, whenever you enable it on your video, the text will be read out loud, which makes the video watching experience fun. Therefore, those who want to add a voice to their TikTok videos can use the text-to-speech feature and let the automated voice do that talking.

You will find almost everyone using it, even those who often use their voice in TikTok videos, and that's because many TikTok users find it entertaining and funny. Well, no matter why you want to use this feature, find out how to do Siri voice on TikTok without any hassle in the next part!

Part 2: How to Do Siri Voice on TikTok?

To do Siri voice on TikTok, you will have to follow just a few simple steps. Here are the steps that you need to take care of:

Step 3: Tap the Upload button and then click on the checkmark.

Step 4: Now, begin writing something on the screen.

Step 5: Tap on the text you have just written, and you will see the Text-to-Speech option.

Step 6: Click on that and hear the automated voice reading your text. Now, upload the videos, and that's it. All done!

If you are not impressed with the Siri voice on TikTok and would instead like to use some other fun and peppy voice for the text, the good news is there are tons of apps that can help you do that. But before we share the names of the apps, let's throw some light on why people are looking for such apps. First, if you are using TikTok's text-to-speech feature in North America, you will hear a computer-automated female voice who will read out the text of the video.

But, when it comes to the UK, the app uses a computer-generated male voice with a rockin' accent instead of a female voice. However, recently the voiceover artist of the female voice has filed a lawsuit against the company, saying that she never permitted TikTok to use her voice for text-to-speech, which is why TikTok is now using a cheerful valley girl voice for the text-to-speech feature. Unfortunately, TikTok users are not happy with the new voice, making them look for the best TikTok voice generator apps.

If you also want to add another voice for the text-to-speech, here are our hand-picked top and best 5 TikTok voice generator apps for iOS and Android. 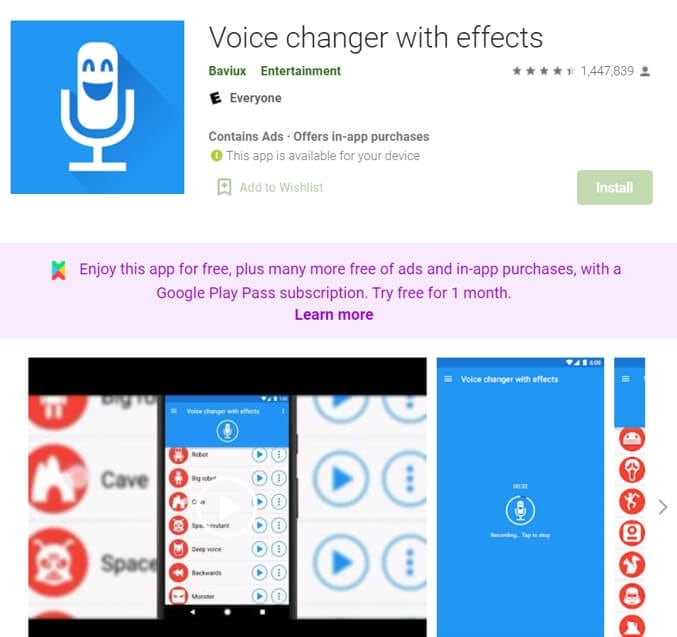 Voice Changer is an easy-to-use application and is available for Android users. It lets you change your voice on the go, and the best part is, it offers 40+ voice effects. For example, you can change your voice to helium, robot, zombie, monster, giant, and more! All you need to do is record your voice and start applying the filter; once you are happy with the voice effect, save the recording and share it on TikTok and other social media platforms. The voice filters are unique, and the sharing options are excellent too. The drawback, though, it displays tons of ads, which can be pretty annoying. 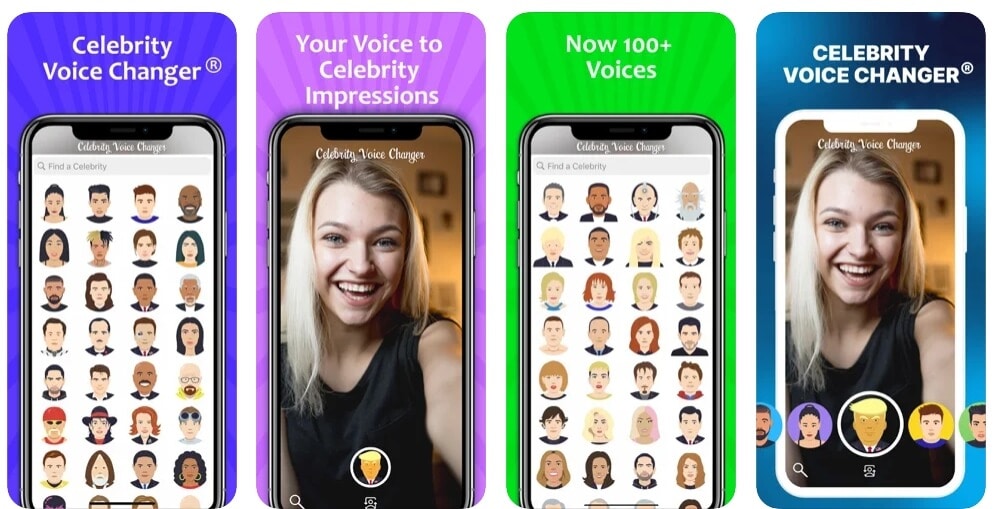 If you want to surprise everyone through your TikTok videos, how about changing the voice to a celebrity's voice? Well, Celebrity Voice Changer Parody lets you do just that. It has more than 100 celebrity voices, and over 25 million people use the app. It's the first-ever celebrity voice changer, and it changes the voice using AI technology. The voice modification process is fast and easy, and the plethora of choices you have will leave you impressed. The only drawback is that the free version comes with limited voice effects.

If you are looking for an app that will let you change the voice of a pre-recorded video, you may like Video Voice Changer – Fun Editor. With this app, you can change the voice of any video and make it sound like a ghost, bear, mice, and more. The voice effects are entertaining. Moreover, Video Voice Changer – Fun Editor offers you 30+ voice effects. All you need to do is pick a voice effect that you want to use and get going. The app has multiple video recording tools, excellent dubbing features, and rich voice effects. But if you want to unlock all the app's features, you will have to make in-app purchases. 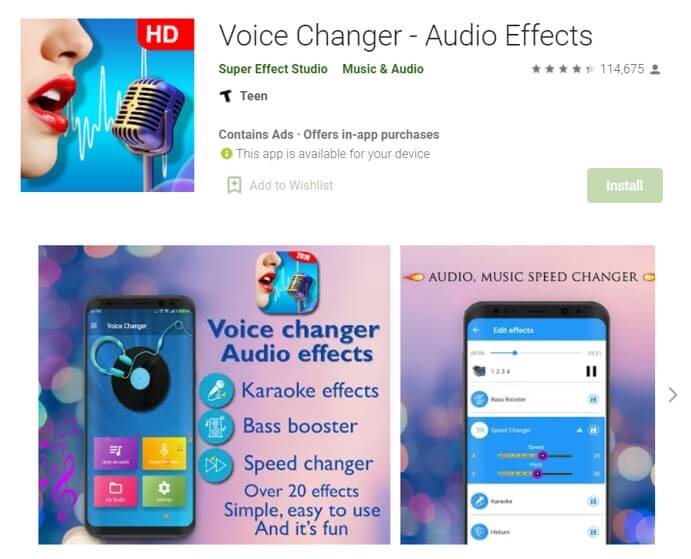 Voice Changer - Audio Effects is an Android app and is available for free. It lets you record your voice in HD quality and later change it to different voices. The interface is easy to understand, and once you add the voice effect, you are ready to share your exciting video with voice with the world. Along with providing you with multiple voice effects, it lets you customize them as well so that you can choose the best sound effect that complements the video. Another feature that you may like is the speed changer effect, making the voice sound hilarious. Along with changing the voice, you can use it to create new ringtones as well. Although it's free to use, the only drawback is that it contains a lot of ads. 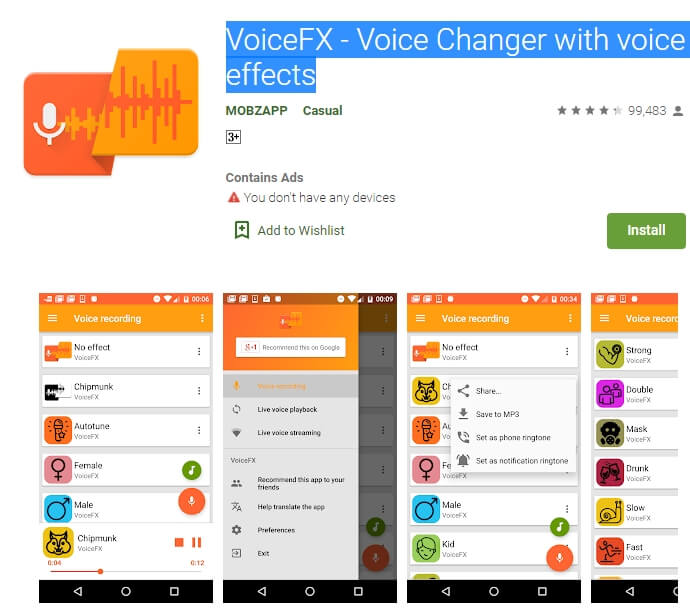 The last one that you can go for is VoiceFX - Voice Changer with voice effects. This app is available for Android users, and it lets you change your recorded voice to different sounds. Not just your voice, you can even add audio effects to music files as well. Some of the popular audio effects you can try are chipmunk, robot, autotune, mask, drunk, female, sheep, alien, and much more. Using VoiceFX - Voice Changer with voice effects is easy. You can choose an audio effect and record your voice, store the audio as an MP3 file, use this app to change a live playback, and much more. Just one app, but it has many features. Some of the voice effects will come for free, but you will have to make in-app purchases for the top voice effects.

Now you know how to get the Siri voice on TikTok, and if you don't want to use the built-in voice of the TikTok app, you can always go for TikTok voice generator apps, which will offer multiple voices to choose from. So, change your voice to a celebrity, animal, or funny character and let everyone enjoy your TikTok video.

FAQ about Siri Voice on TikTok

Can I Do Siri Voice on TikTok Android?

Please note that Siri's voice has now been changed to a cheerful valley girl voice because of lawsuit issues. But if you want to use the text-to-speech feature, you can easily do that on your Android phone. The text-to-speech function is available for both Android and iOS devices.