The popularity of YouTube has increased significantly over the years, with people watching about 5 billion YouTube videos daily. Most of the videos that get millions of views are from musicians. This blog will look at the top ten fastest YouTube video to 100 million views in 2021. We will also give you tips on making a viral video on this platform.

If you are wondering: What are the fastest 100 million views on YouTube? Check out the list below.

Released on May 21, 2021, Butter is a song by BTS, a South Korean boy band. It's the second English-language single from the septet. During its release, the music video amassed 100 million views within 20 hours, 55minutes; this is the fastest 100 million views on YouTube. What's more?

The video starts in black and white, with the boy band donning silk suits. After about 36 seconds, the color of the video changes. The choreography in the video reflects the upbeat and flirtatious vibe of this song. The band tried to put loads of emotions into it. Essentially, signature moves include brushing their hair back, kissing their hands, and giving a mischievous look.

Additionally, the video featured a technicolor elevator sequence whereby each member freestyles their dance moves. At one point, the septet forms the word ARMY using their bodies as a homage to their fans.

Dynamite was released in August 2020, and it's the first song this South Korean boy band has recorded in English. The music video earned 100 million YouTube views in 23 hours and 25 minutes. After 20 minutes of its release, Butter broke the record by garnering the fastest 10 million views on YouTube.

The upbeat disco-pop song has elements of bubblegum pop, soul, and funk, and it takes influence from the Seventies music. It features celebratory horns, echoing synths, and snapping handclaps. The song is about feeling joy and appreciation for the small things in life that make it valuable.

Blackpink's How You Like That was recorded in two languages (Japanese and Korean. It was released through Interscope Records, YG Plus, and YG Entertainment. It's a club, trap, hip hop, EDM, and pop song. The music video took one day and eight hours to amass 100 million YouTube views, making it one of the fastest 100 million views on YouTube.

The video starts with Jisoo, Lisa, Jennie, and Rosé sitting like monarchs on steps. The colorful music video shows the quartet delivering a strong kiss-off to an unseen enemy and a message of resilience. They also dance in different places in the video, displaying a range of dance moves.

4) Boy With Love by BTS and Halsey

Boy with Luv is the lead single for BTS' 6th extended play called Map of the Soul: Persona. Its release date is April 12, 2019, under Big Hit Entertainment. The video garnered 100 million views in one day and 13 hours.

The music video has vibrant visuals, and it starts with the American singer and songwriter Halsey sitting bored behind a booth that sells tickets. The scene then flashes to BTS, clad in different shades of hot pink and delivering their dynamic choreography in front of Persona, a retro movie theater. The cinematic visual then unfolds, setting the septet against kaleidoscopic backdrops, as they dance, rap, and sing.

In the music video, Selena, Lisa, Rosé Jisoo, and Jennie are wearing different clothes and sets. Selena is seen in a high-waisted, red-and-white-striped Shoshanna bikini; her next look includes an Eighties-inspired Puma bodysuit. The five girls portray several versions of today's woman image who know what they are worth and what they want.

Lalisa is the debut single by Lisa of Blackpink; it's the lead single from the musician's debut album of the same name. The song is a dynamic hip-hop track with influence from Thai culture. The music video garnered 100 million YouTube views in two days and one hour.

The video is visually-packed with ten set-ups and 13 outfit changes, making it exciting to watch. In the video, the artist appears sitting perched on an ornate throne, and she is adorned in gold jewelry with matching nails. The best part of her outfit is the traditional Thai headdress, which is tiered and anointed with flowers. Lisa ascends to the throne while she's alternately executing excellent, intricate choreography.

7) Permission to Dance by BTS

Permission to Dance was released July 9, 2021, through Sony Music and Big Hit Music as a stand-alone single. It's the group's third English-language single. Mac, Andrews, and Stephen Kirk were in charge of the production.

The music video hit 100 million views in two days and two hours. In the video, the boy band wears cowboy outfits and breaks their dance moves in the Western background. The theme of Permission to Dance looks like the end of the coronavirus pandemic as nations resume their normal activities and declare the worst of this disease seems to be behind them.

Released through Columbia Records and Big Hit Entertainment on November 20, 2020, Life Goes On is the lead single from BTS' 5th Korean-language studio album Be. It was produced by j-hope, SUGA, Antonia Armato, Chris James, Ruuth, RM, and Pdogg.

The video reached 100 million views on YouTube in 2 days and 3 hours. And this makes it among the fastest 100 million views on YouTube. The band appears to be lounging lazily, playing a video game. One of the members comes, V, with pizza, and they enjoy it together. V then takes the other members for a drive. When they came back, they watched some movies. They later went to a stadium and performed this song without the audience.

9) Kill This Love by Blackpink

Kill This Love was released by YG Entertainment on April 5, 2019, and it was distributed through Interscope Records and YG Plus. It's the group's first Korean material since June 2018, when they released Square Up. The song is the lead single and Blackpink's debut release with Interscope Records. Its official music video amassed 100 million views in 2 days and 14 hours.

The music video begins with introduction shots of each member of Blackpink; they are in a room surrounded by trumpets. Jennie performs with 2 massive swan set pieces with the sunset behind her. Lisa then struts around a candy shop as she knocks things off shelves and kicks displays. The scene with Jisoo is a stark contrast, as we see the sun against a black setting with her head being above a pool of water. Next, viewers will see a distraught Rosé, as she's driving a sports car fast chasing down her doppelganger.

Gentleman, a K-pop song, was released on April 12, 2013. It serves as the follow-up to Psy's hit single Gangnam Style. Gentleman's music video took 2 days and 19 hours to get 100 million views on YouTube. Also, it held the record as the fastest YouTube video to 100 million views for more than six years.

The video features the artist performing different pranks on people; Psy later meets a lady who pulls pranks on him. Psy is wearing a tuxedo and sunglasses as he walks a paved street hill together with a company of relatively older men. He then stops and kicks a traffic cone.

Butter by BTS is the video that has garnered the fastest 1 million views on YouTube. Fans of this group were eagerly waiting for the release of this video, and that's why it managed to break records.

Dynamite by BTS holds the record of the fastest 200 million views on YouTube. It reached this figure in 4 days and 12 hours after its release.

Lisa's video Lalisa holds the record of the fastest 300 million views on YouTube. It garnered 300 million YouTube views in 48 days; this is the fastest any K-pop female solo artist has reached. 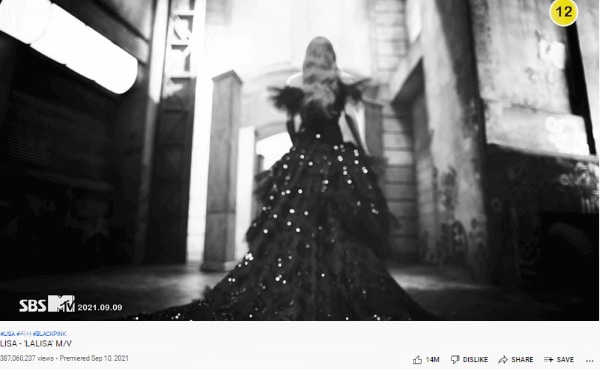 Create Your Own Viral Video with Filmora

Do you want to create a viral video? Filmora has got you covered. It has impressive features that help users make a pro-like video for your YouTube channel. They include

● Now you know which videos hold the fastest 100 million views on YouTube. You can also make your viral videos using Filmora. This editing tool has everything you need to create high-quality videos that will get views fast.