2D Character Animation: Everything You Should Know About It

2D Character Animation: Everything You Should Know About It

With the popularity of video content, more and more businesses tend to use animation for promotion, as they magnify conversion rates by 20%. Some companies hire 2D character animation services; others try to make them online with software help.

Part 1 What is 2D Character Animation and What Does 2D Animation Do?

2D animation is identified by having its characters and objects created in a 2D space. It means that they only have height and width to specify.

However, 2D animation is considered a traditional style, known from the 1800s. Initially, it was designed by merging the frames in which one drawing was followed by another and making them different; every second consists of 24 frames.

We all remember the classic Disney animations. Snow White and the Seven Dwarfs, The Little Mermaid, Bambi, etc. They are some of the highly famous 2D animation styles.

With the advancement of computer technologies, this process also got digitized through various 2D character animation software.

In this guide, we'll talk about everything relatable to 2D character animation, and let's proceed with the expert tips and tricks to create inspirational style within animation character 2D.

01Look for a real-time reference

Using a real-world reference for 2D character animation can help you effectively animate faces. For example, when studios collaborate with voice-over artists, they often record their facial movements. It further helps 2D animators to ensure their expressions get captured convincingly.

If it seems impossible, you can consider using your face, so you have something to refer back to. You could also use a mirror and utter the words your character will speak. It will display the correct animated expressions.

You need to use observation a lot more. One of the primary aspects of 2D character animation is bringing life to animate objections. Therefore, you must carefully consider how emotion can get portrayed and select each movement accordingly.

Take time watching how people in real-life environments talk and interact with each other, how they express emotions, how they move, etc. Please don't spend much time doing this, as it is valuable to research.

03Simplicity is the key

2D character animation is never complex compared with 3D. Think carefully before creating a scene too complicated. You must not include too much information, which is hard to digest, and you may even find yourself compromising the scene's realism. Try not to heavy the stage with too many pose changes or other elements, and keep it genuine.

Drawing animation consumes a lot of time. You can't complete it within one day, so you better know deep down that one task only can be done after you have revamped it various times. For 2D character animation, you may need to draw objects on paper several times.

You can't master the skill of animation character 2D quickly. Luckily, all pains will be relieved someday.

Feedback is an essential element of artistic development. It's wise to actively seek out feedback from familiar figures who can help you enhance. Naturally, we may see work we have invested a great deal of time and effort indifferently to someone not so involved in the creative process. Feedback can equate to a valuable learning opportunity that will assist you produce the results hit the spot much more appropriately.

While there are nearly numerous options for 2D character animation tools and software, this tutorial will animate a character in Adobe After Effects.

You need to install the Duik animation plugin for Adobe After Effects to simplify the whole process. You can animate and rig characters' entire limbs with Duik using just the placement of their feet and hands.

While this isn't an essential step, it can be valuable for beginners, as you'll see in this tutorial. Luckily, Duik is available for free from Rainbox Laboratory.

You need a moving character before you're able to start animating. You can create this character in Adobe Illustrator and import it into After Effects.

Try creating a straightforward character with an aim on the character's limbs.

In the example mentioned below, you can see that the body is a very rudimentary shape—a circle—with long legs that make it simple to consider the animation process. 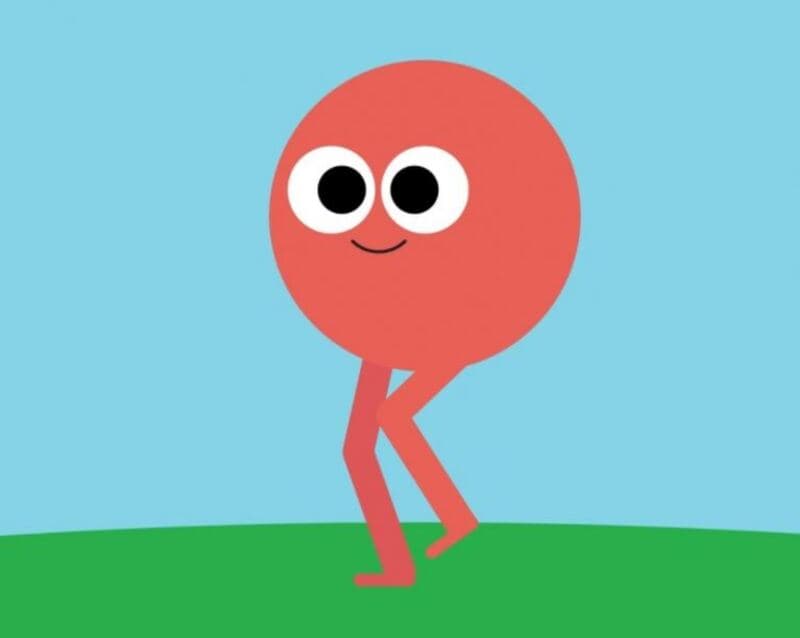 Check the character's joints. Making a round joint between the lower and upper parts of the legs, for instance, will help the character move more smoothly. 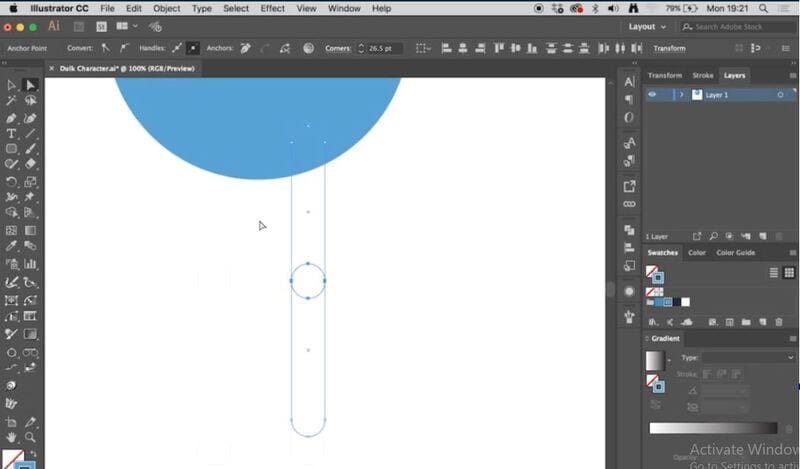 Now, you'll need to make a few final adjustments before moving your character artwork. Break your character out into layers firstly. Every section of the character that will move independently needs a separate layer.

So, layers include his circular body, face, and the leg's segments (i.e., lower leg, upper leg, and foot). 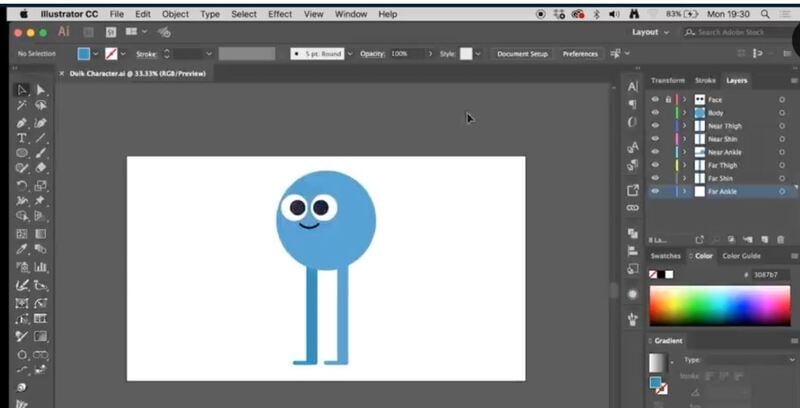 To import your character artwork, go to File, click the Import tab, and choose your character file. Ensure that you need to import it as a composition to ensure it includes the layers you just created.

Now, the 2D character animation is almost over by the initial rigging.

Firstly, lower the opacity of all your layers to above 50% to see the critical joints within the character.

Next, you must ensure that the joints hinge in the ideal direction. It's simple to do with the anchor point tool. For each character's layer, place the anchor point at the center of gravity for each layer of the 2D character animation. 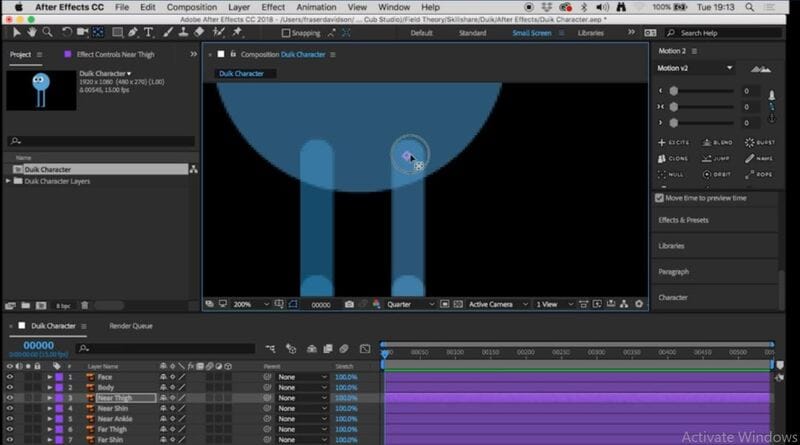 It makes sure that the leg moves together as one unit with multiple hinge points.

Use the Duik toolbar to create a rig. Select each layer from the extremities inward from each limb, lasting with your controllers.

You would select the ankle for a leg, followed by the upper portion, the lower leg, and conclusively, the controller at the ankle. Then, select auto-rig within the Rigging area of the Duik toolbar.

The entire leg will move when you move that ankle controller. If your character contains them, repeat the process for the other leg, along with other limbs.

Before proceeding, test the limbs to make sure they hinge and move correctly. You need to adjust the opacity of the character back to 100% once you are satisfied with the movements. 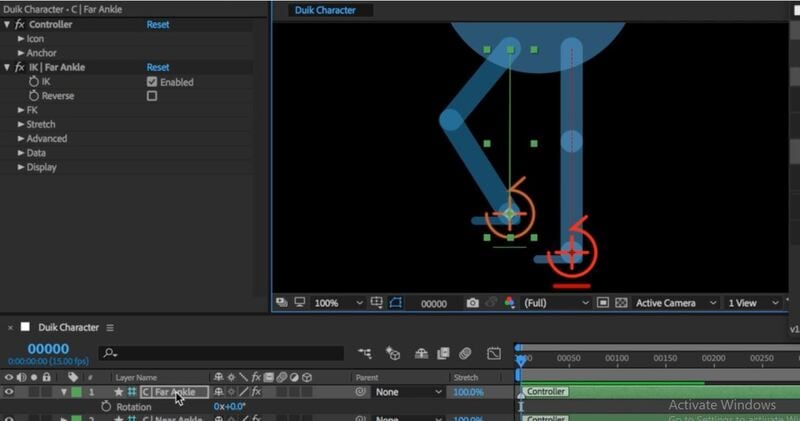 You can begin animating after completing a rig. First, create keyframes—the ending and beginning points of the character's movement. The character's legs are at their most magnified are thus the endpoints for a walk cycle. Make sure that the beginning and ending of keyframes are identical to get an ideal loop.

Start adding in-between frames from there, like when one leg crosses over the other in the middle of a walking stride.

Moreover, you can add 'easing” to the animation via 2D character animation After Effects' Easy Ease tab, located under the Animation button, and Keyframe Assistant.

It will smoothen the transition between the keyframes. You will have a primary walking sequence at this instance. 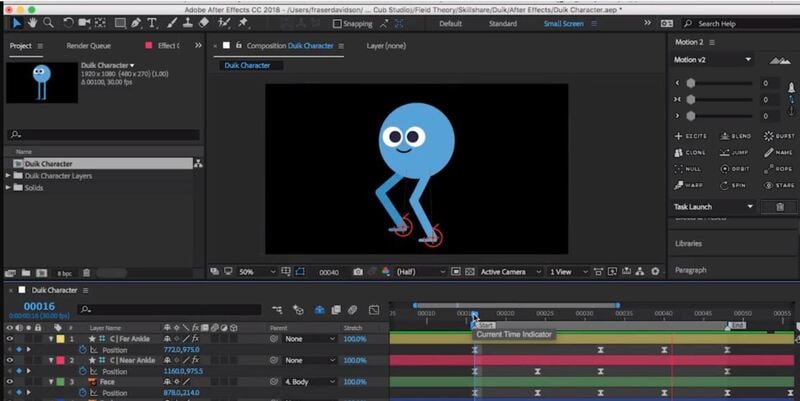 Now, you can make further refinements to add detail and secondary movement, like a bobbing motion of the head. You can also modify elements like the keyframe velocity, further smoothing out the animation.

As you practice, you'll get a better feel for your animation preferences and develop more advanced realistic 2D animation character design capabilities.

Given above is a list of the best 2D character animation templates worth considering. Yet, if you are tired of using After Effects Templates, why not select Wondershare Filmora Template Mode?

It is a brand-new mode recently launched by Filmora to ramp up your story. It is a simplistic way to use compared with After Effects.

Filmora Template Mode is a bold breakthrough that helps you create incredible videos in a minute. Forget about dragging n dropping the video clips into a timeline; Filmora template Mode provides you a new way of generating videos automatically by using various stylish video templates.

Steps to create a stunning animated video in 3 levels

Pick up a video template that best suits your needs. 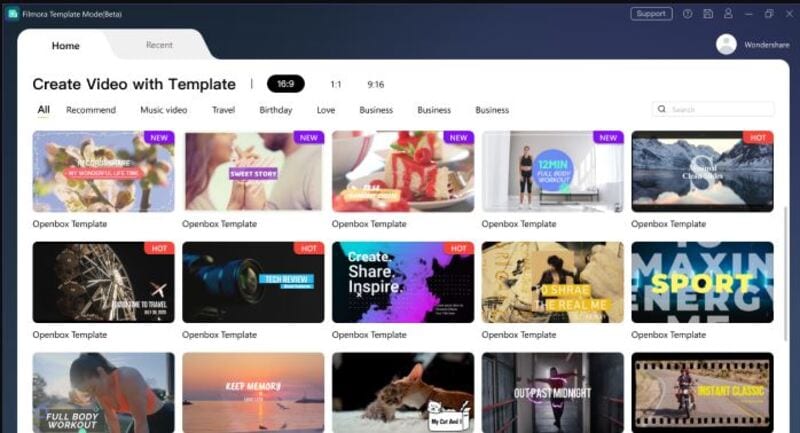 Import at least three video clips or images and let AI assist you in ramping the production process without hassle. 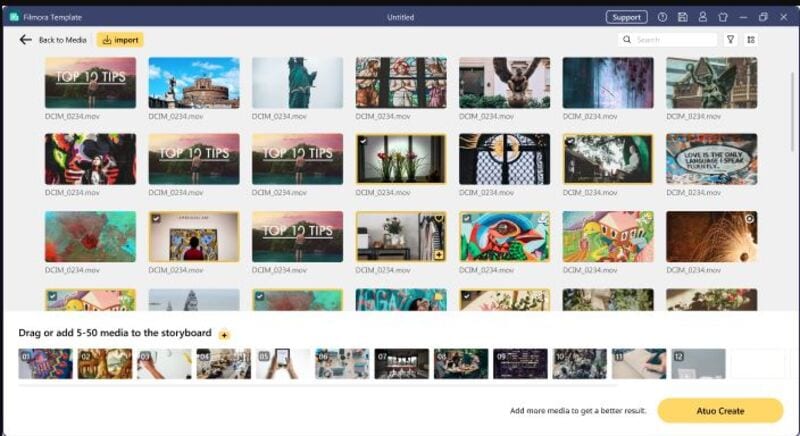 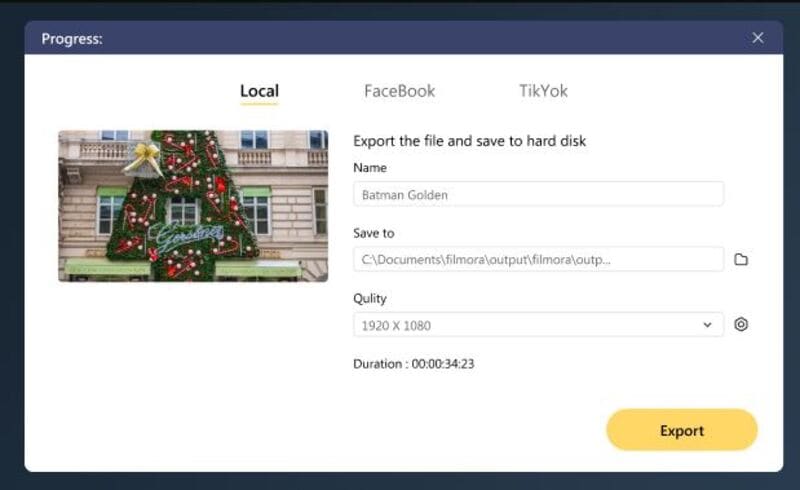