Cartoon character have stamped their faces in our hearts from childhood. A cartoon artist represents a cartoon or a natural person's unique features with simple shapes accurately to recognize the person with the drawing and does not require a lot of patience to do this. The goal of the cartoon is to attract, and the child should get attracted when they see a cartoon image as well as adults. Though the sparkle may appear a little dull, it remains unaltered.

Part 1 What Do I Need to Start Learning Animated Characters Drawings?

There are many software's available, and anyone can create an animated character drawing, but still, the art of creating a perfect character needs a master. You don't have to be a Disney-grade animator to make it; start with simple minor characters. Animation is the art of bringing a 3D illustrated cartoon into life. It is created by projecting a sequence of images one after the other immediately. Let us discuss the essential things you need to note before animating characters.

●Timeline is the most important for animation. Depending on the software, you have various options to change the duration and add effects.

●Animation is generally preferable in 24 frames per second, which means the total number of people in the frame for one second.

●There are two types of working they are one's and two's. 2D Animation is usually done in two's, whereas 3D Animation is in one's.

●In hand-drawn animations, keyframes are more critical to maintain. The keyframe is the position for the cartoon as per animator has decided.

●Breakdowns combine one or two keyframes, which decide the motion in between the keys.

●In-betweens are all the frames that come between to smooth the motion—automatically generated by the computer to move from key to key.

●Composting is creating or joining two or more images to create a single cartoon frame.

Smurfette stands out as the lone female Smurf in the entire bunch of blue critters around the village area. One of the rare designs with long hair and a dress is hers. Her design is a lot of fun to sketch.

So, in general, it's best to work through the lesson as is, then turn it into Brainy, Papa, Joker, or even Smurf.

Angelica Pickles is one of the most challenging characters to depict from The Rugrats. But her design is so intricate that getting it proper will give you a true sense of accomplishment. Her pigtails, like her leggings, might be challenging to master, so keep practicing.

Yogi Bear is a cartoon character on the sweeter side of the comic animal variety. Yogi Bear is a beloved character from Jellystone Park. As long as you get his tie and collar just right, this guy is a breeze to draw.

Magilla Gorilla is another bizarre creature from Hanna-catalog. Barbera's Because he comes with a bow tie, a little cap, and suspenders, this design is a little more complicated. Not to mention his enormous clown shoes. These small details can be a pain to draw, but Magilla is a very charming gorilla.

Even further back in time, in the 1960s, there was the ever-popular Top Cat. He's wearing a cap and a button-down vest, and he's making some reasonably fancy dances. Give Top Cat a shot if you like The Flintstones' basic Hanna-Barbera art style.

Helga is another character with some wacky hair. There's a lot that's bizarre about her. And half the fun of drawing her is figuring out how to do it. Just keep an eye on her head since getting it correct, especially with her rectangle hairdo, can be a little odd.

These are some of the cool animated characters to draw.

You'll learn how to create cartoon characters individually, including their faces, hair, and facial expressions.

01How to Draw Cartoon Characters

We'll go through the fundamentals of human perception before getting into cartoon face drawing. Humans have a unique ability to synthesize the details that make up a structure or object in highly complicated ways into fundamental and simple ones. We can express everything with a few curves and geometric forms in this way. In cartoon face, we need to identify the character just by looking like looking at the below picture a girl and a boy. 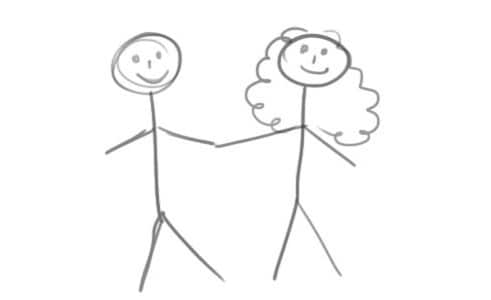 02Here, you will learn How to Draw a Cartoon Face

Let us begin with a sketch of a cartoon face. A circle is a basic cartoon shape. All you need is a circle. As seen in the image below, draw a vertical and horizontal line intersecting at the center.

Let us have a look at how to make cartoon eyeballs. Draw an oval shape with a slight lean to the side at the top for the eyes. Repeat on the other side.

Slightly thicken the characteristic to represent our character eyelashes at the top of the circle, place the brows above the eyelashes to create a shocking appearance, draw both pupils to the center in the same direction. 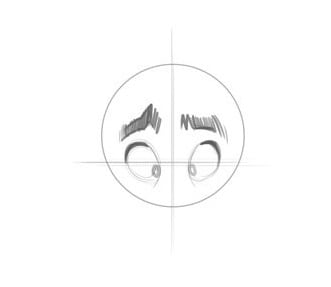 When creating a nose from the front, it's typical to leave off many details. Even if you merely sketch its tip, it will likely provide a convincing impact. Drawing only one side of the nose is also quite frequent. Children's mouths are extremely simple in cartoon style, regardless of gender.

The ears are viewed from the front; therefore, the internal holes are not visible. The circle has already established the shape of our head. 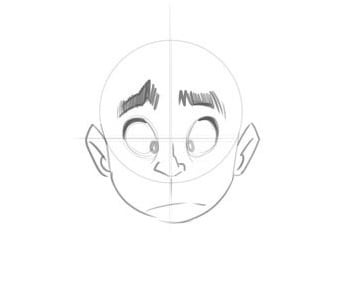 03Let's learn about How to Draw a Cartoon Hair

Keep in mind that our characters' hair is essential for identifying their personalities, and it can also indicate their age. So, all we need is an effortless and playful haircut to bring our boy to life. Because there is no particular method for drawing hair, you'll have to experiment until you find the perfect look. Look for photo references on the internet! Take a look at a magazine shoot or a Google search. 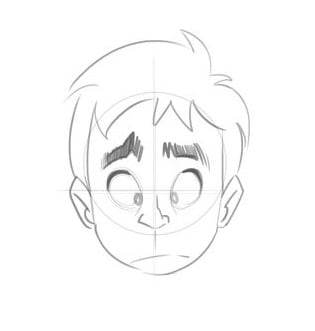 03How to Draw Characters with different Facial Expressions

By simply following the instructions below, you'll notice that you can completely transform his expression: Lowering one brow and raising the other, eyelashes are used to cut the eyes in half, putting a smile on the face one side is higher.

To stay under the eyelashes, move the eye pupils up. That's all there is to it! With just a few tweaks, we achieved the desired result. The circular form of the eyes, hair, ears, nose, chin and the circular shape of the ears are all the same! It's that simple! 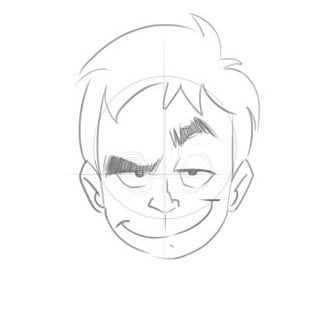 While working in cartooning or video making, Wondershare Wondershare Filmora Video Editor comes out with pros in mind, which can effortlessly convert conventional films into cartoon videos. If you want greater control over your cartoon video, you may also use keyframing to create it. You can fine-tune the parameters in Effects to achieve the best results. You can even change the Animation color after it has been created. It also allows you to use different text themes to showcase your videos.

We propose Wondershare Filmora Video Editor, in this case, to create animation videos by adding keyframes, resulting in a smooth and natural animation. To get started with Animation, all you need is a white plane. Aside from that, color correction and an audio mixer will take your animation video to the next level.

● Tutorial on how to draw a cartoon character accurately