You will learn the step-by-step procedure to create animations and add other edits to the animation. And also a few tips to develop better Blender 3D animation effects.

01 Is Blender best for animation?
02 How to Create 3D Animated Characters with Blender in 15 Minutes.
03 Become a Pro from Beginners in 8 Tutorials

Part 1 Is Blender best for animation?

The answer to if the Blender is suitable for animation is yes. Blender animation is the best for making animations and bringing any living to animator. This software is mostly for professional works whose limitations will be learning the process, not any technical defects. Let's talk about why Blender 3D animation software is the best and more helpful.

Character animation is an essential tool for animation, and Blender has developed this tool with no way less to other software.

There are many animation effects other than animating characters. Blender 3D for free has all the necessary tools to do all types of rigs and animations without any difficulty.

Blender is one software that has 2D animation inbuilt in it, like drawing and creating 2D animation.

Blender's animation tools are making motion graphics possible by advancing the features than it was four years ago.

Nowadays, many people are using Blender to do professional works, including freelancers, small studios, and even game developers.

Part 2 How to Create 3D Animated Characters with Blender in 15 Minutes.

This is a series for people who want to learn how to create 3D blender animation characters from keeping a reference image. Blender's ringing tools will be more helpful for this process.

Initially, import a Blender 3D animation character into the Blender to animate. Many free and paid characters are available in Vincent, and Rain v2.0 is present in Blender Cloud; above all, these characters are for free.

Steps to import the character either from Vincent or Rain v2.0

Download the character file from the cloud to any destination folder on the computer. Open the Blender and place the cursor on the origin point on the screen. Later select import present in the File menu and choose the file format. And now, allow the Python script to run for the selected character folder. 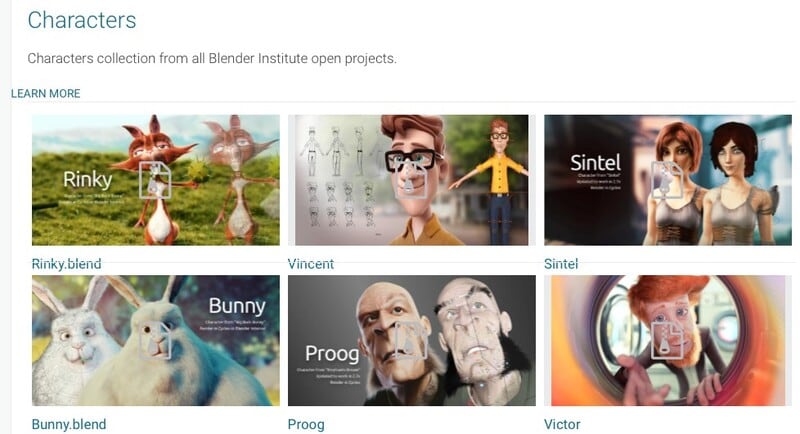 There will be a diamond-shaped icon below to choose the keyframe you want to add to the timeline, which you may also delete.

Adding a keyframe is simple. Open the timeline window in the animation editor. Press the alphabet 'G' on the keyboard, move the bone and place it. Then hit Shift+I and choose the channel LocRot and insert the keyframe. Likewise, you can adjust the keyframe by dragging, making it fast or slow to the requirements.

Moving the keyframe to 20 makes it faster, and moving to 40, slower.

It will be challenging to add movements to the characters, so plenty of videos can get the moves right. There are various reference images and videos available on the Internet. You can either add the selected reference materials to the second screen or add them to the 3D space. Let's discuss how to add it.

Hit Shift + A to add the reference material. Later select "Image" and then choose the "Background." Scale the reference image onto the 3D space after it loads.

Afterward, you can leave it to the animation of the reference article, or you can further edit or amplify the movements.

This step will add smooth movements by combining two keyframes for a more professional look. We have to use the Dope sheet to do complete this process. Let's see how to add it.

Initially, split the window horizontally. Later switch over the dope sheet below the animation tab, where you can see keyframes of all axis. Now you can drag and edit to slow or amplify the speed.

There is a Graphic editor, which is more advanced to make the movements more accurately and directly to edit the curves.

Sound effects make any video or animation better. You can add and import the sound files. You can also create your sound and insert it into the Blender. Let's discuss adding sound and making it sync to the character.

Download the audio file, hit shift + A to open Add menu, and choose the "Sound." Now select the sound that you wish to add.

Drag the sound to keep it to the specific sections alone. Also, you can switch between "No Sync" to "AV Sync" in the playback to give the best synchronization to the characters. The volume and pitch can be adjusted using the sidebar.

Before rendering, make sure you keep the FPS is same as that chosen during the keyframes to avoid unnecessary renders. After setting the frame correctly, causing the animation is easy.

Initially, click on "scene" and choose the file extension, file formats, and file colors (BW, RGB, or RGBA). Select the encoding container as "WebM" and video Codec as "WEBM/VP9. After adding the sound, set the audio codec to "Vorbis." Choose output quality and speed.

Awesome! We have successfully blended a character using Blender 3D animation software. With more practice and knowledge about more tools, one can easily use the Blender 3D mouse.

Part 3 Become a Pro from Beginners in 8 Tutorials.

This YouTube tutorial focuses on Blender version 2.8. The tutorial features the redesigned user interface and tools like 3D viewpoint and UV editor, which has new interactive tools. And about different 3D shapes and simple edits like adding colors and "G drag," etc.

This YouTube tutorial says about the introduction to the Blender 3D for free for beginners. He explains simple movements like rotating and scaling, shapes, and colors to the objects. He also says about the pivot plot and how to create a basic primitive using blender.

The Blender Beginners video by ZoyncTV is on Blender 2.6. Indeed, even as hotkeys and terms change, the hidden ideas will forever be pertinent. Every video in this 11-section is somewhere between 10 and 20 minutes, split into five separate subjects: displaying, modifiers, materials, surfaces, and animations. It's a beginner-level course.

The Blender Survival Guide series by Creative COW is outdated but the best video for somebody who has never utilized Blender. Each video in this 13-section series is somewhere in the range of 15 and 45 minutes in length, which means you'll get 350 intense minutes of preparing. It is a survival reference that shows just the outright necessities.

The KatsBits site is home to lots of tutorials, video games. Its Blender animation tutorials are fantastic when you want a beginning stage for various 3D models. There are 45 Blender tutorials. Tutorials take you through the most common way of making a 3D level for Quake and tell you the best way to make a basic model.

While this is another Blender 2.8 tutorial, Daniel's tips are overall for any Blender work process. He teaches simple stuff like vertex and edges and some technical parts in the Blender 3D animation software.

This last tutorial is a "wiki book" called Blender 3D: Noob to Pro that consists of important Blender animation tips and experiences. Start with an outline of 3D ideas and a top-to-bottom introduction to Blender.

Regarding Blender 3D mouse software, we would like to recommend one more tool to you the most. Yes, it is none other than Wondershare Filmora, a perfect alternative to Blender 3D animation software wherein you can get excellent 3D animation effects, 3D texts and animate it. There are some simple steps and various options to work in Filmora for creating 3D animated effects.

● Animating the text in 3D

● How can you create characters using Blender animation?

● 8 Tutorials to move you from a beginner to a Pro.