How to Make Ken Burns Effect in Final Cut Pro?

Ken Burns Effect is an advanced feature of Final Cut Pro that allows users to add creative animations to their videos and images within minutes. You just need to select your picture, add movements to the clip, and choose the start and the end position to produce high-resolution stills. Besides, you can do a tilt, zoom in, a pan, or a combination of these three moves on a single image. This way, you can use the Ken Burns Effect to highlight the stimulating features in your photograph and save your memories in the form of innovative and high-definition animated clips.

This article introduces the readers to Final Cut Pro and explains how to add the Ken Burns Effect in 8 simple steps.

Part 1: How to Make a Ken Burns Effect in Final Cut Pro?

Final Cut Pro is user-friendly software and makes it easy for you to create a Ken Burns Effect without having advanced skills and expertise. So, are you interested in knowing the best part? Given below are a few simple steps to create Ken Burns Effect and make your pictures and videos look adorable.

Step 1: Add Images to the Timeline

First of all, you should specify a name for your project and add photos to the timeline in Final Cut Pro. For this purpose, select multiple photos and press E. A clip will be added to the timeline as shown in figure 1. 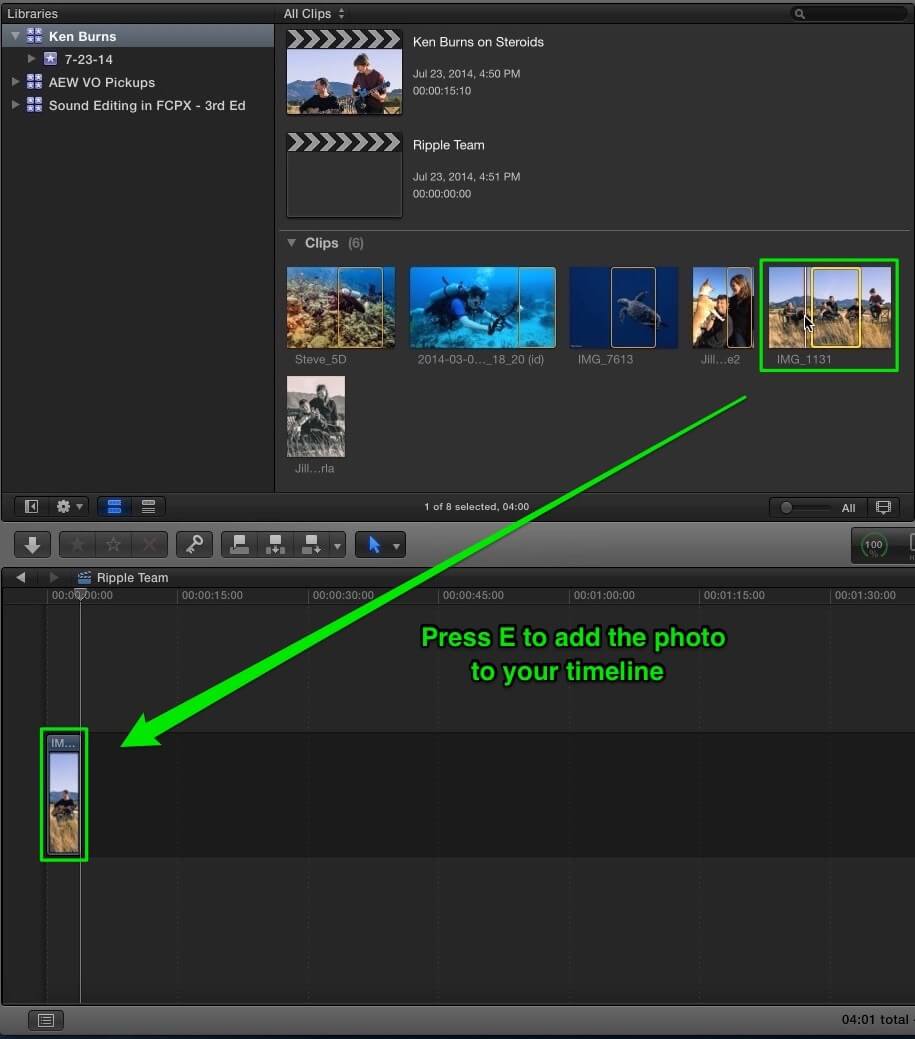 As you can see, our timeline has no other video clip. Hence, Final Cut Pro will not recognize the clip until you adjust the video properties such as format, resolution, and rate, etc. For this purpose, click OK to use your preferred settings and press Shift + Z to fit the picture to your timeline window. Once you’re done it’s time to apply the Ken Burns Effect. 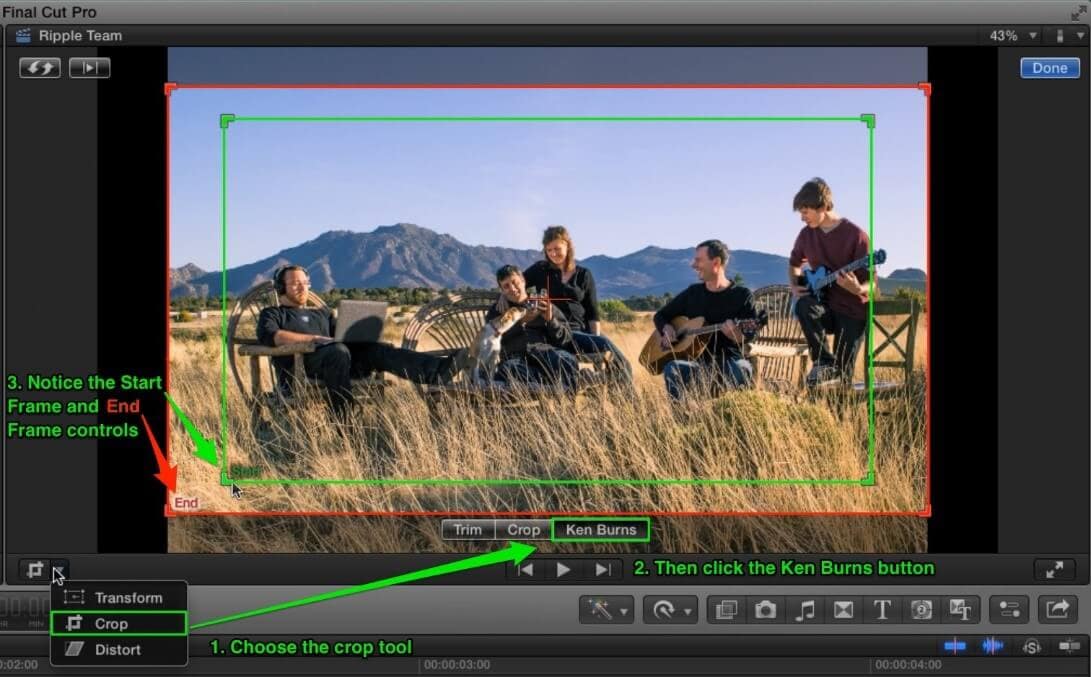 In the Ken Burns display, you can see the controls for adjusting the panning and zooms effects by changing the size and position of two-colored rectangles overlaying on the clip. To customize the Ken Burns effect: 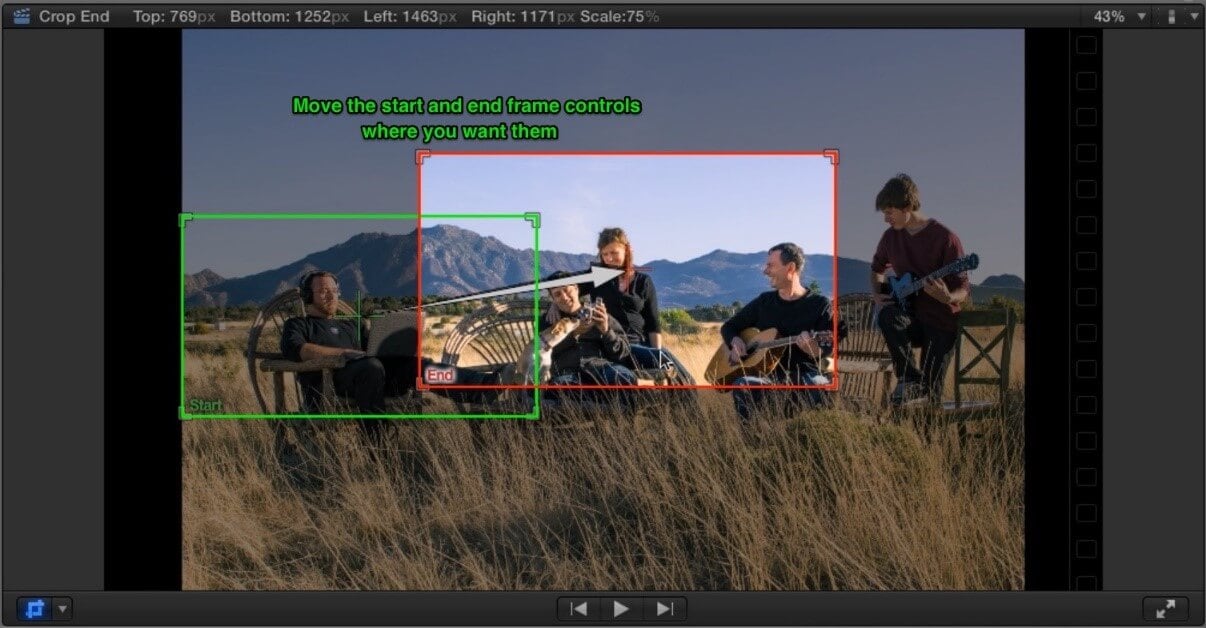 Step 6: Adjust the Duration of the Freeze Frame

The users can also adjust the speed of the animation and the duration of the freeze-frame by trimming your clip. For this purpose, trim the length as per your requirement and it will optimize the speed as shown in figure 6.

Now, swap the start and ending frame as per your preference for the Ken Burns animation. Here’s how you can do this: 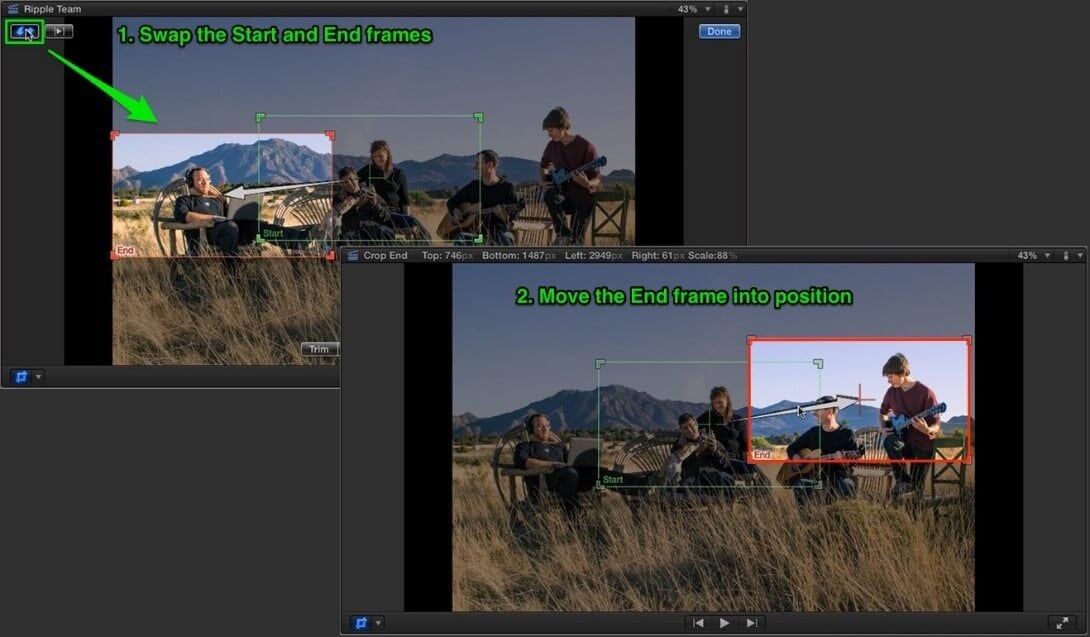 After you have optimized the speed of the Ken Burns Effect by trimming the clip’s length and have widened the shot to include everyone, it’s time to preview the changes you have made. Given below are simple steps:

Seems a little complicated? Filmora allows users to do Ken Burns effect, or pan and zoom effect, in much easier steps, click to download and have a try!

Part 2: How to add the Ken Burns Effect to Multiple Camera Movements?

Although you can apply a single Ken Burns movement to your image, you can still give the impression of multiple movements being used. This means the Ken Burns Effect can be added to multiple camera movements by duplicating the photo and building numerous movements in sequence.

What is the Ken Burns Effect?

The Ken Burns Effect is a feature in Final Cut Pro to create a pan and zoom effect by using your predefined start and end positions. Basically, it is a crop effect with one crop at the start of the clip while the other at the end. Ken Burns Effect can be further customized by adjusting the smoothness of the animation. While creating a Ken Burns Effect, the motion applied to the video clips gets automatically smoothed to accelerate and decelerate the movement slowly at the start and the end of the animation.

Why the Effect is named after Ken Burns?

Now, as you have learned the purpose of the Ken Burns Effect, you must be curious about its name. It is named after American documentarian Ken Burns, who is known for his instantly recognizable and highly influential visual aesthetic. Surprisingly, Ken Burns did not invent this Ken Burns Effect; rather, it has existed for decades. You might be wondering why the technique was then named after Ken Burns. This was due to the persistent and adroit use of this technique that it is now known as the Ken Burns Effect. 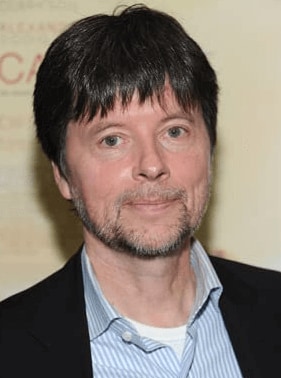 What are the Applications of Ken Burns Effect?

Primarily, the Ken Burns Effect is used due to the unavailability of a film or video. The technique gives action to still photographs to glorify the subjects of interest like couples in wedding photography. It gets better and better as you apply simulated parallax with Ken Burns Effect to make your 2D images appear as 3D plus advanced zooming visuals. You can also use the Ken Burns effect to make a video of your graduation ceremony pictures or memorable moments of reunion. Ken Burns Effect is also used in documentaries by professional filmmakers and editors.

Adding animated effects to your pictures and videos makes them look gorgeous. This is crazy, isn’t it, when you impress your peers with your editing skills. So, what’s the bottom line of this whole discussion? Try adding the Ken Burns Effect with Final Cut Pro to create a pan and zoom effect on your pictures and clips get the output in your desired format.

Liza Brown
Liza Brown is a writer and a lover of all things video.
Follow @Liza Brown
You May Also Like
How to Record Your Computer Audio in Audacity