Minecraft was released twelve years ago, yet it remains the most played video game of all time. Ever since it was stewarded by Microsoft in 2014, Minecraft has gone through many improvements and expansions. Despite all that, Minecraft still comes short in graphics. Have you ever felt like the game was too “blocky” or unrealistic? Well, this is exactly what the modding community created shaders for, and they are meant to change the game’s picture quality and resolution. From motion blur to photorealistic lighting, shaders are capable of bringing your Minecraft worlds to life and give you a unique gameplay experience. 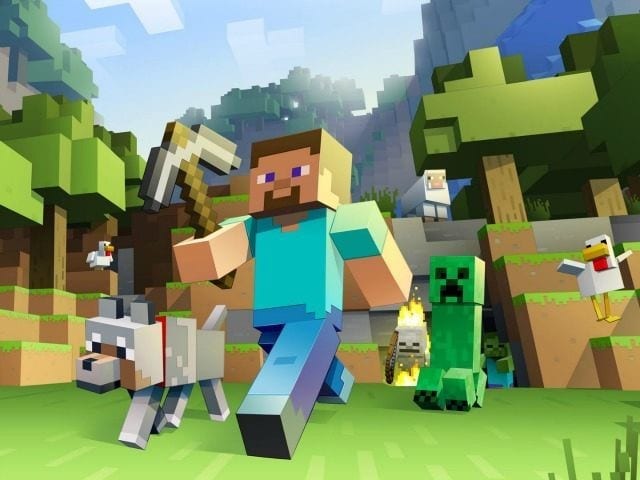 There is a Minecraft shader for every art style, with different balances of visual quality and performance-friendliness—and oh boy, are there are a lot of excellent shaders out there. It can get quite overwhelming, so we’ve compiled a list of the best and most popular Minecraft shaders to help you get started. With the upcoming holiday release featuring lush caves, underwater caves, and dripstone caves, now’s a perfect time to pick a shader to go with the new world generation available in the snapshot version of Minecraft.

However, before you start downloading each one of these gorgeous shaders, you might want to download the Forge or Optifine mod first. These mods make it possible for you to use the shaderpacks, they also come with different optimization fixes that make Minecraft Java Edition run better. Similarly, you need to make sure the shaders and mods you’re installing are made for the version of Minecraft you own. Finally, here is the list of the best Minecraft shader packs of 2021: 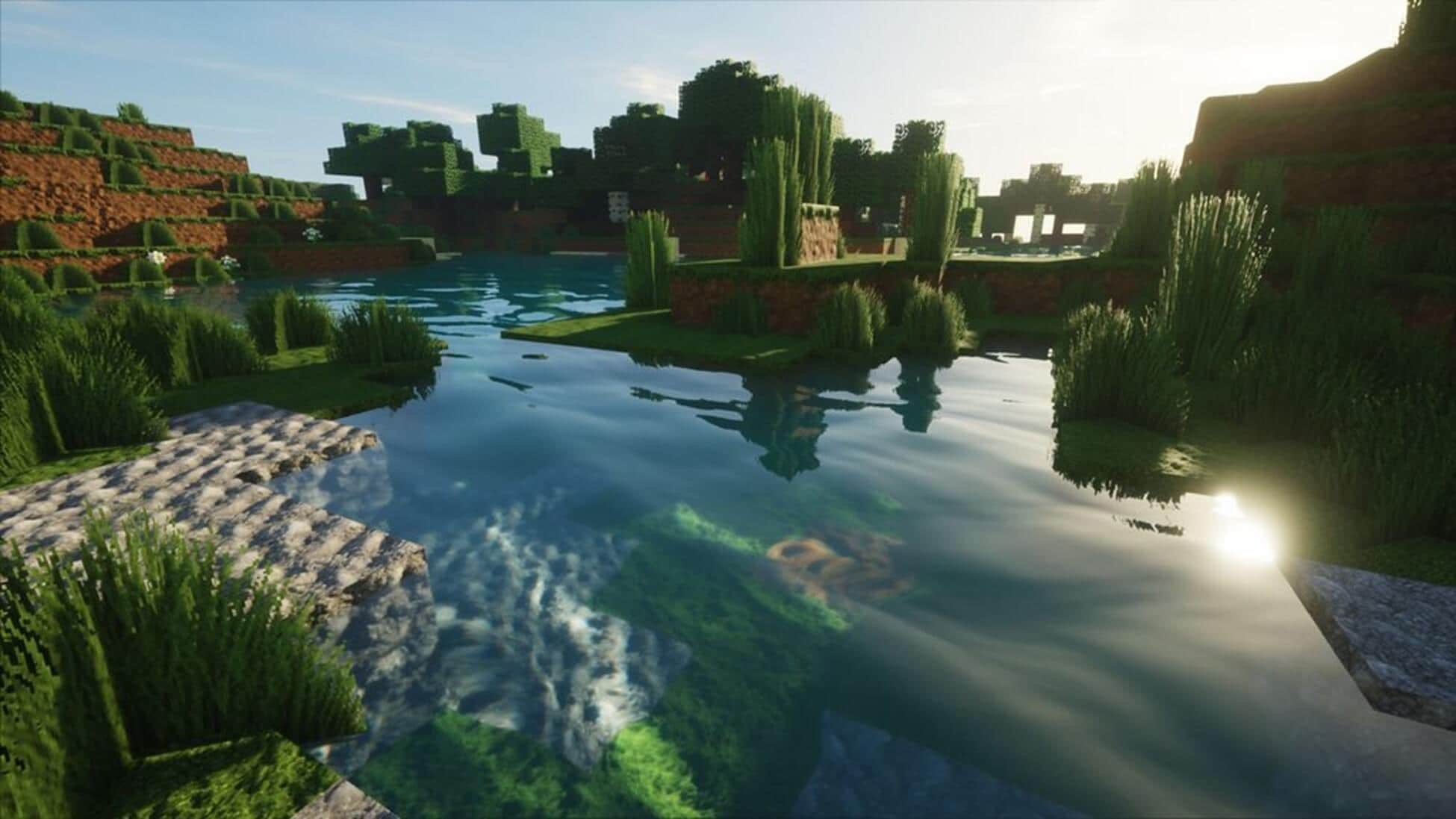 Sonic Ether’s Unbelievable Shaders is considered a staple in the Minecraft shader community and has been around for ages. The pack was released in 2011, and it has gone through many versions since then. It does everything a good shader can do: introducing realistic lights, shadows, and textures. It creates a sense of realism better than other shaders out there, which is why it’s so used by many. The pack’s aesthetic can be compared to a movie or a beautiful photograph. 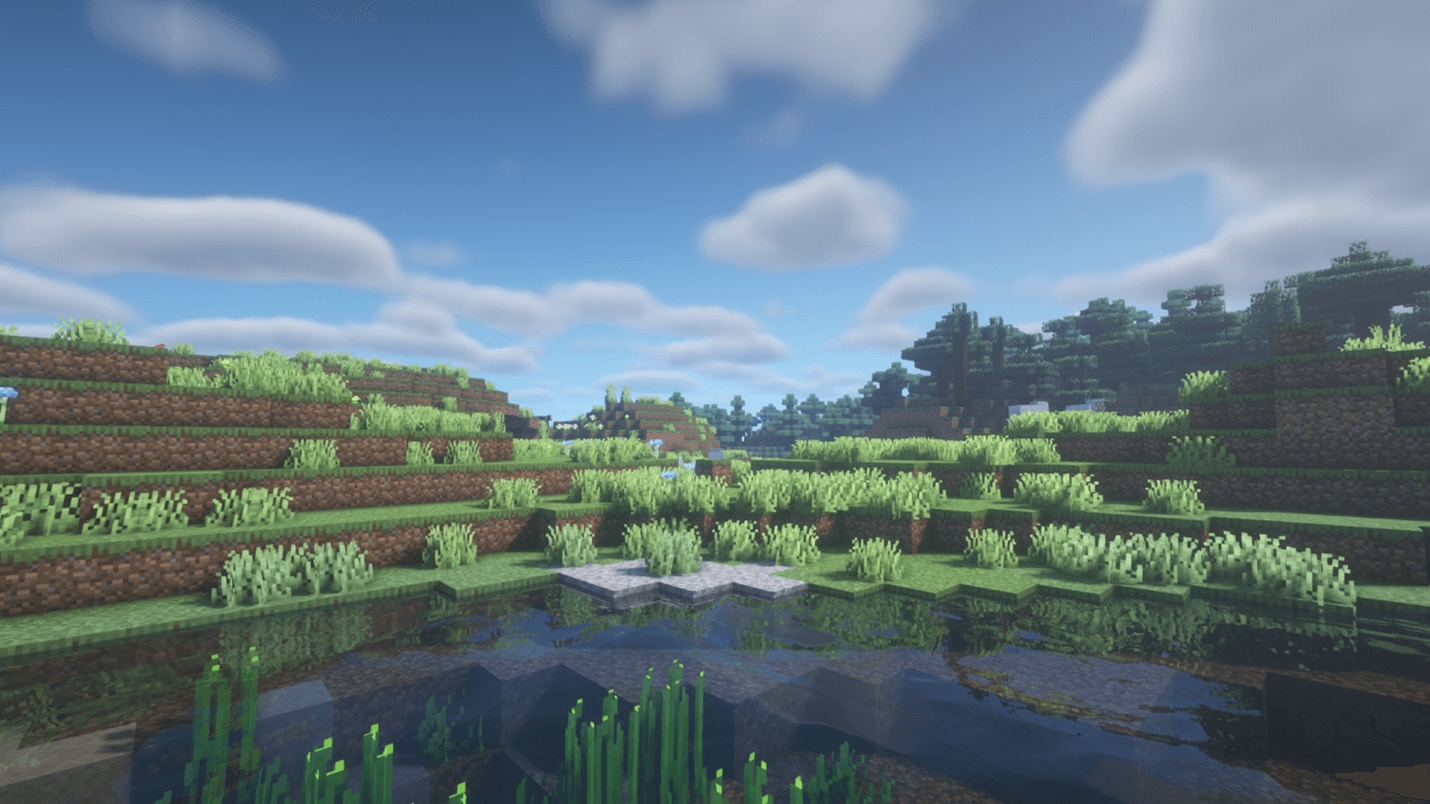 BSL is another staple for shaders mods, thanks to its creator Capttatsu. While it’s difficult to say what the best Minecraft shader is because of different preferences, you can’t argue with the amazing quality you get with BSL Shaders despite its small performance. The pack isn’t as intense and highly saturated as other shaders, which makes it a perfect choice for players who just want to keep it low-key. If you prefer neutral tones and want a natural-looking shader that still enhances lighting, water effects, and plant animation, then BSL Shaders is a good option for you. As always, it can be customized through its settings.

If you want something simple and similar to the feel of vanilla Minecraft, then Nostalgia is the one for you. These shaders are meant to replicate the look of first-generation shader packs that came out when OptiFine was first released. As the name implies, the pack gives off a nostalgic vibe that certain players may like. Because they’re not as advanced as the other options in this list, it’s also performance-friendly. 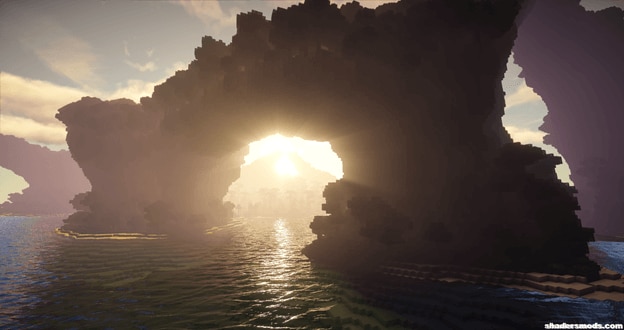 The Continuum Shaders Mods is the ultimate ultra-realistic mod, and leans toward the cinematic side. So you’ll need a modern graphics card to use it, and don’t even think about trying it out with anything else. This pack places a huge emphasis on the lighting engine and showing intricate details, and is supported by countless visual effects and color options. Continuum Shaders is no doubt the best shader to use that looks natural and realistic, and is one of the highest quality shaders available. Since this shader is in huge demand among players, mods have also created a lite version for Continuum. 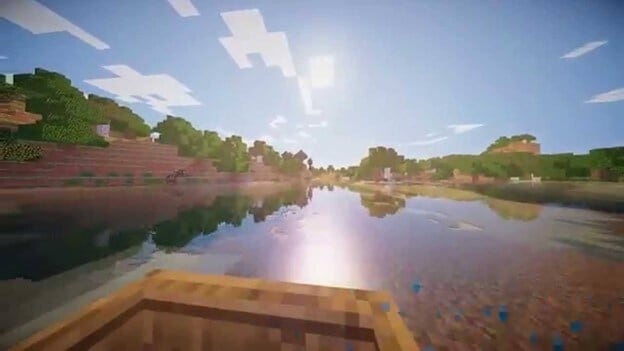 As the name of this mod suggests, Lagless Shaders are specifically made with performance in mind, which is why it’s a preferred option for those with budget or old computers. If you own a low-end PC but still want to explore your Minecraft world with less of it’s plain graphics, this pack is for you. While the mod won’t generate as much luxurious effects as other Minecraft shaders on this list, it still does wonders when it comes to enhancing the colors of the game world. 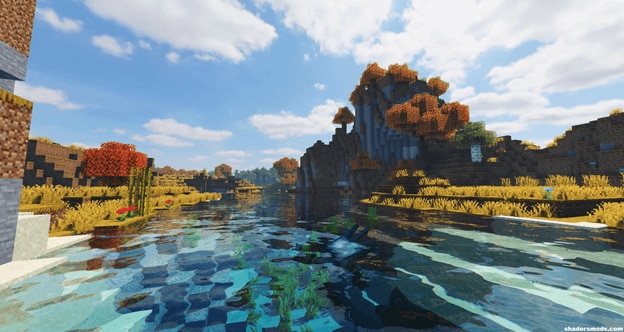 ProjectLUMA is another ultra-realistic shader mod on the list, and as usual requires a good PC to run smoothly. The creators of this mod was inspired by the KUDA pack, and delivers outstanding visuals without cutting corners. The highlight of this shader is the special work it does on the lighting. From light rays to lens flares, this will make Minecraft seem more beautiful and breathtaking than it actually is. 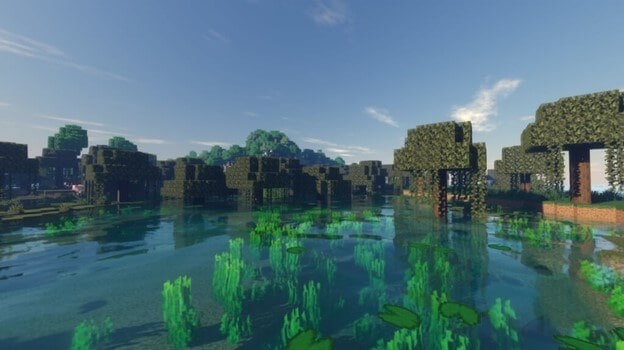 The Voyager is for those who value realism in Minecraft, and it pairs better with realistic texture packs than the default ones. It’s best described for its muted and washed out color tones, making the shader a bit more low-key than other shaders. A lot of detail went into making the water seem realistic, which looks see-through and crystal clear without much shade compared to other packs. However, the Voyager will only work with Nvidia graphics cards, and is extremely heavy on resource usage. 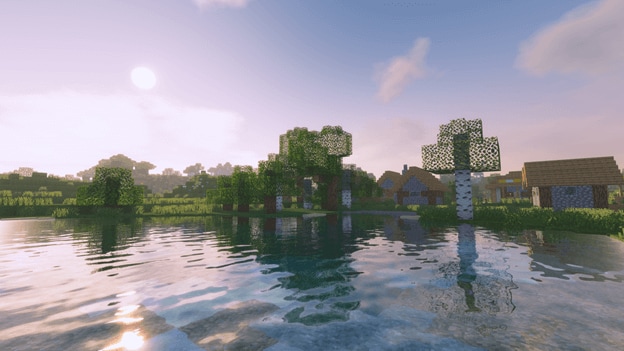 This is a fairly new Minecraft shader on this list, which just came out of beta in late 2018. KUDA quickly won the hearts of the community for its relatively bug-free experience. This pack is ideal for players who want crisp, refreshing, vibrant looking worlds. It can make default textures appear spectacular without sacrificing the original feel of the game much. KUDA is a perfect choice for those who don’t want the game to look too different from the original. The great thing about this pack is that you have different options that fit what your computer can handle, so everyone has a chance to experience these shaders. 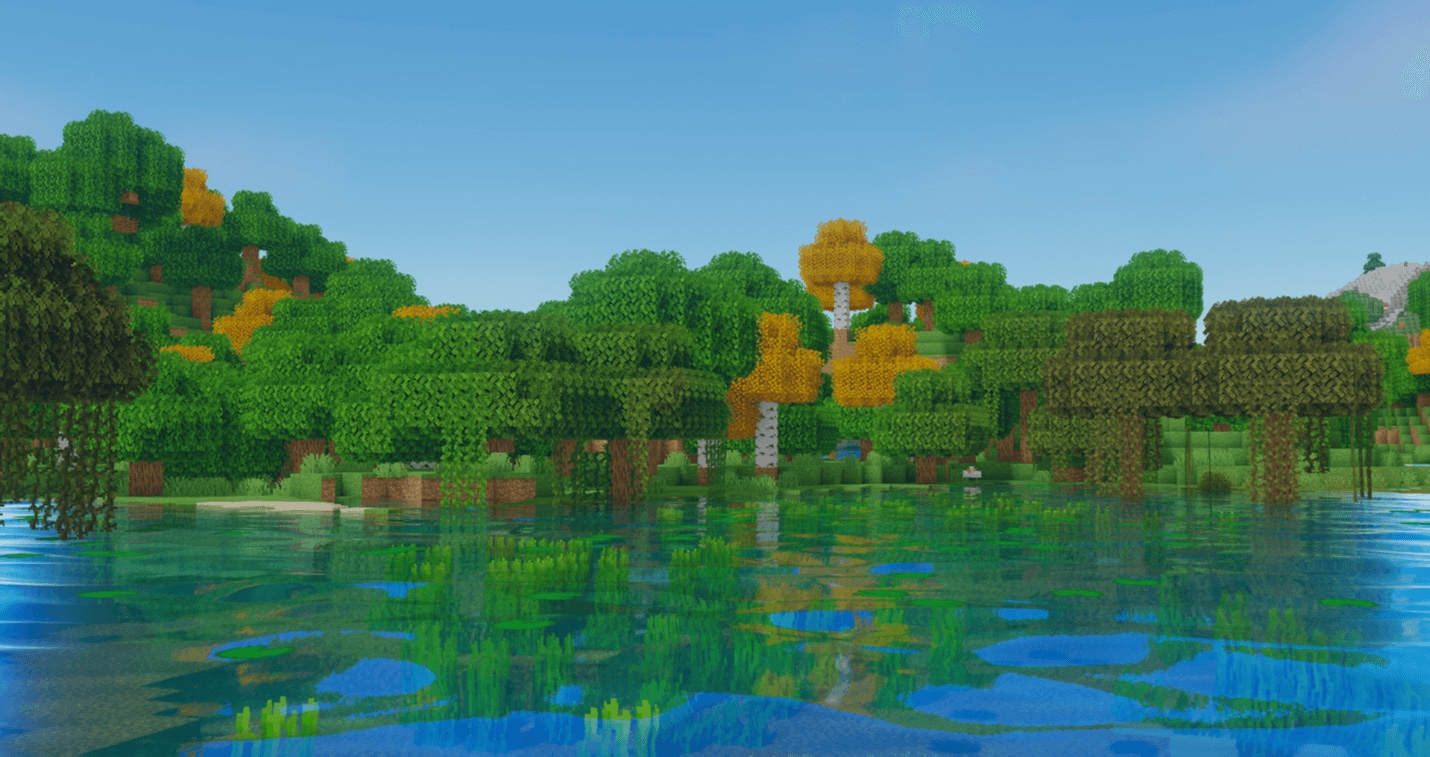 Each pack in this list specializes in something, and Oceano highlights—you guessed it: the water graphics of Minecraft. It essentially cranks up the vibrance, brightness, and saturation up to 11. A lot of players find this to be too wild, but other players swear by the Oceano’s unique style. If you’re looking for something completely different, you should consider trying this shaderpack out. This is especially great if you love exploring oceans, and features some incredible water effects.

Oceano doesn’t ignore other aspects of the game, they also make the sky look gorgeous and realistic, and other basic things that shaders do like tweaking the lights and shadows. 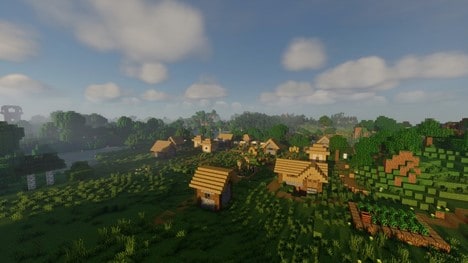 Chocapic13 is also a popular shader mod, the impressive thing about this pack is that you can pick different levels of the mod depending on how much your computer can handle. Regardless of the level you choose, it promises to deliver high-quality visuals. The main feature of Chocapic13 is that it’s extremely vibrant in color, and it’s so realistic the trees actually move. This shader is ideal for taking pictures of their builds with a gorgeous world in the background.

So, here they are, our picked top 10 best Minecraft shaders.