How to Install and Uninstall Audacity on Ubuntu

Open-source audio editor Audacity is available for free download and usage. It is one of the most popular multi-track audio editing tools for Windows, Mac OS X, and Linux. Audio recordings may be recorded, edited, spliced, and altered with Audacity. How to install Audacity on your Ubuntu 20.04 LTS system is explained in this post.

The official website for Audacity shows version 2.4.2 as the most recent release. Download the newest version of Audacity for Ubuntu 20.04 and then install it.

First, we'll use the PPA approach to install Audacity.

Installing Audacity on an Ubuntu system is as simple as entering the following line in the terminal to include the unofficial PPA developed by "ubuntuhandbook" to the Ubuntu system's software sources, then rebooting. 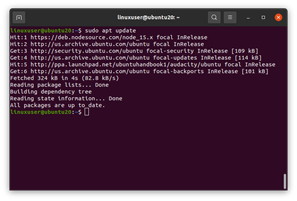 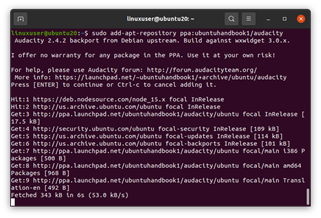 After you've added the Audacity package to the system's software sources, you'll need to update the package repository in order to get Audacity to work. 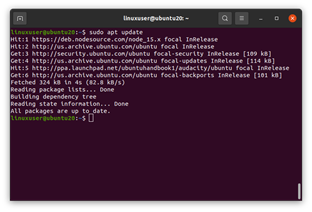 As soon as you have updated the package repository, you should be able to successfully install Audacity.

Navigate to Activities & type in the word 'audacity' to find it. 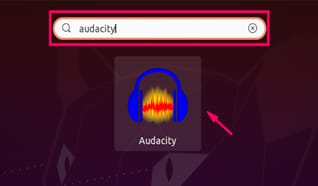 As you can see in the picture, Audacity has been successfully installed and is ready for usage on my PC. 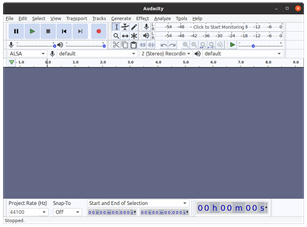 Installing Audacity from the Snap Store

A version of Audacity is also available for download via the Snap shop. Using a Snap is among the quickest and most straightforward methods of installing any program since it takes into account all of the application's updates and dependencies. In order to install Audacity using Snap, you must first ensure that Snap is already installed on the Ubuntu system. Snap is pre-installed in the newest versions of Ubuntu and is available as a default. If Snap is not already installed on your system, you may do it by using the instructions shown below. 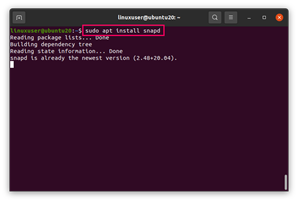 After safely installing Snap, you'll be able to proceed to install Audacity by using the script provided in the next section. 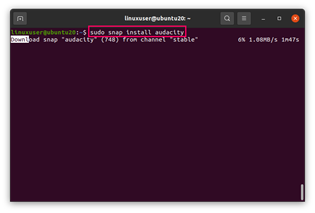 It will just take a few minutes to download & install Audacity on your computer. 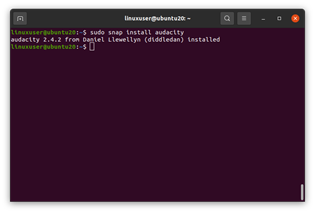 As soon as Audacity has been installed via the Snap method, launch the program by searching for the phrase 'audacity' in the Application menu.

To launch Audacity, click on the Audacity icon on your desktop.

How to uninstall Audacity Ubuntu

For whatever reason, if you wish to remove the Audacity program from your computer, you may follow these instructions.

If you installed Audacity through the Snap method, execute the following command in your terminal: $ sudo snap remove Audacity

If you have installed the application using the PPA, you may remove it by performing the instructions shown below.

The first step is to

This indicates that the add-apt-repository command was used to add the PPA to your system. You may also use the same command to uninstall the PPA from your computer. Simply include the —remove option in your command.

As of the right moment, the PPA has been withdrawn. What happens to the programs that are installed using these PPAs? Will they be eliminated as a consequence of the abolition of the Patriot Act? The answer is a resounding no.

Thus, PPA-purge enters the scene to help solve the problem. The PPA is disabled, but all of the apps installed by the PPA are also uninstalled, or they are reverted to the original versions given by your distribution.

Install the PPA-purge package and remove the Audacity package may be accomplished by running the following command.

I hope you now have a clear grasp of installing and uninstalling Audacity on Ubuntu 20.04 LTS Focal Fossa. I hope this article has been helpful. Additionally, we cover Filmora's voice effects & how users may use the program to improve and change their own voices. Filmora allows you to re-voice video/audio & previously recorded voiceovers. The Pitch option on the Timeline may be used with video/audio and voiceover files. Change the tone of a video and recording to make it sound unique. You may quickly alter the voices in the videos with Filmora. A story or video should accompany your viral. Allows you to alter the pitch of your voice by selecting the Changing Pitch option. You may adjust the video's pace (Optional). Make a duplicate of the video or audio that has been altered.