Before the YouTube era learning makeup tricks or finding out useful skin care tips has been much more difficult. Today, you only have to do a quick search on the world's largest video sharing platform and you can get the result instantly.

Besides knowing who to ask for a bit of beauty advice, you also need to trust the source of information. Instead of browsing through thousands of beauty videos on YouTube, you should listen to what top beauty gurus on YouTube have to say about the topic you're interested in. The beauty vloggers we featured in this article have millions of subscribers for a good reason.

Let's have a look at some of YouTube's most influential beauty gurus.

Wanna making your beauty video and makeup video more attractive and get more views? Try to use some cool beauty effects in the Filmora video editor and add some stylish filters and overlays, change the speed video to fast forward some unimportant frames, or slow down the clip to show more details.

Top 10 Beauty Gurus on YouTube You Should Know in 2021 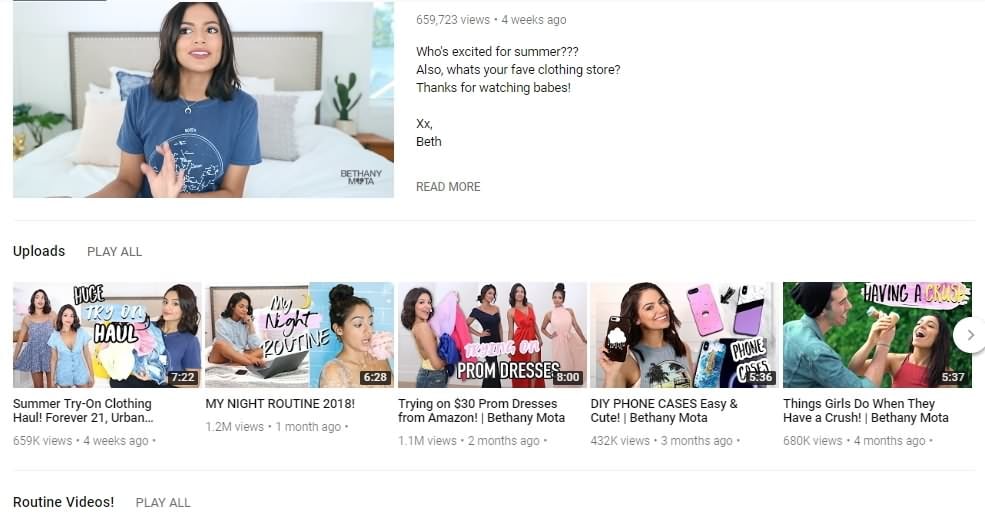 The American vlogger started her YouTube channel that currently has over 15 million subscribers in 2009. Bethany is more than just a beauty guru, even though she first became famous for her makeup and fashion videos because in recent years she started producing videos that cover a wide range of topics.

Eleven months ago, she released a truth or dare video with Logan Paul that has 4,6 million views which shows how popular the 22-year old beauty vlogger has become. Besides being an award-winning YouTube star, Bethany is also an accomplished singer and an aspiring actress.

Zoe is better known for her online pseudonym Zoella. She started her career as a blogger in 2009. By the end of the same year, her blog had thousands of followers, which gave Zoe the idea to start her own YouTube channel. A little less than a decade later Zoella channel has 12 million subscribers and it is widely considered as one of the highest beauty and fashion authorities on the Internet.

Besides producing informative and captivating beauty tutorials, she also frequently uploads videos about food, lifestyle, fashion, and traveling. However, her skincare and makeup product reviews are what Zoe is famous for.

Rachel's YouTube channel Rclbeauty101 has over 13 million subscribers and a few years ago, she has landed on the number one spot on Zefr's Social Media Influencer Under 21 list. Today this 23-year old Philadelphian focuses on DIY beauty tutorials, although videos on her channel often cover a range of different topics.

Levin started her career with a video titled 'How to Conceal Under Eye Circles' in 2010 and in the next few years her YouTube channel was one of the fastest-growing channels in the world. Rachel's most viewed videos combine humor with beauty and fashion which makes them a joy to watch.

A beauty guru from the Netherlands gained worldwide recognition when her video 'The Power Makeup' went viral in 2015. The Nikkie Tutorials YouTube channel has over 10 million subscribers 820 million views. The best part is that the rapid growth of Nikki's channel is likely to continue in the foreseeable future.

Unlike many of her fellow YouTube beauty gurus, Jager is a professional makeup artist who frequently features the commissioned work in the videos she uploads to her channel. The young Dutch star is only 24 years old, and she is already one of the best sources of beauty tips and tricks you can find on the Internet.

The MyLifeAsEva YouTube channel was started by Gutowski in 2011 and for the last seven years, it has steadily grown more popular. In June 2018 Eva's channel had 8.6 million subscribers and her unique beauty videos frequently attract millions of viewers.

The California-based beauty guru is praised for her entertaining videos that cover a wide range of topics, from date tips to step-by-step DIY makeup tutorials. Eva also has a successful acting career as she has appeared in a number of TV shows and she has a YouTube Red show titled 'Me and My Grandma'.

Books, movies, vlogs, beauty, or makeup are just a few topics Marzia or CutiePieMarzia covers in her videos. The Italian YouTube superstar has been dating Felix Kjellberg or PewDiePie, the owner of the most subscribed channel on YouTube, since 2011.

Although her boyfriend may be more famous than her, Marzia's channel still has 7.5 million subscribers and nearly half a billion views. Her fashion style is appealing mostly to younger generations, although her makeup tips can be applied by anyone regardless of their age. Marzia designs clothes and shoes that can be purchased at her online store.

Besides being one of the most influential beauty gurus on YouTube Jeffrey Steininger is also a songwriter, singer, fashion designer, and model. He first rose to prominence by publishing music on his MySpace page, which soon resulted in his first solo album 'Beauty Killer'.

His style may be unorthodox since it resonates better within a younger, more open-minded audience, but the makeup tips he provides in his videos can be used by anyone to get the look they always wanted. Jeffree Star's YouTube channel has 7.4 million subscribers which shows just how popular this Californian really is. Jeffry also has his own fashion and cosmetics line.

Most of the videos you can find on Carli's YouTube channels, the one with the most subscribers is named Carli Bybel, are centered around different cosmetics product reviews, makeup tutorials, and fashion tips. She started producing YouTube videos in 2011 and over the years she reviewed some of the most popular makeup lines, including those released by Khloe Kardashian and Kylie Jenner.

Some of her videos have over a million views while one of her most popular videos 'How to Grow Your Eyebrows and Eyelashes' has over 7 million views. Carli's is undoubtedly one of the top beauty vloggers today and her popularity should continue to grow.

A great idea for a new haircut is hard to come by, which is one of the reasons why Mindy's Cute Girls Hairstyles channel is so popular. The idea to create hairstyle videos came in the early 2000s, but it wasn't until 2008 that Mindy realized she wanted to produce vlogs. She has been posting videos to YouTube since 2009, and she currently has 5.5 million subscribers.

Her videos offer quick and creative hairstyle solutions that will make any women look amazing. Mindy's twin daughters, Brooklyn and Baily have their own YouTube channel with a substantial amount of subscribers.

Since 2009, Promise has run her incredibly popular dope2111 YouTube channel that has over 5 million subscribers. Her makeup transformation techniques which she presents in the videos posted on her channel have stunned the world. Promise has disguised herself as Johnny Depp, Scarlett Johansson, Michael Jackson, or Angelina Jolie to mention just a few celebrities she covered.

She got the idea to create makeup videos after watching the movie Avatar and trying to recreate the Naa'vi looks. The video went viral and made Promise a YouTube beauty guru and one of the most respected makeup authorities on the Internet.

Read More to Get: 5 Methods to Go Frame by Frame on YouTube Video >>

Coming up with ideas for a new look is not always easy. So in order to get a fresh perspective, you should check out the top beauty vloggers we featured in this article and discover useful makeup tutorials or fashion tips that will help you to always feel confident about the way you look. Leave a comment below and let us know who is your favorite YouTube beauty guru.

If you're a business holder and want to find YouTube influencers for collaboration, you can check out InflueNex, which is a helpful influencer marketing platform for you to find, manage and contact the social media influencers.

We are going to take you through all the steps you'll need to take if you'd like to host a webinar for free with YouTube and help you spread the word about the products and services you're offering.