These are the transitions that we're going to be creating for this video. They consist of creating a fast movement on both clips at the same time to connect them. But if we move both clips with a transition, we'll be able to see the edges of the clips. And this will ruin the smoothness of the transition. So, we need to set up the clip so that the edges are not noticeable.

Practical Example - a Transition with Precision

Here, we have two videos without any transition, and we want to make a transition between them.

Here we'll press Ctrl + B (for Windows) or Cmd + B (for Mac) to slice the clip. This small 10-frame section is the one that we'll apply the effects to. So, we'll move it to the second track to avoid any confusion.

To set up this transition, we've prepared a preset that you can download from the link in the video description. We can import it by going to the Effects Panel, right-clicking anywhere on the Panel, and click on "Import Presets" option. 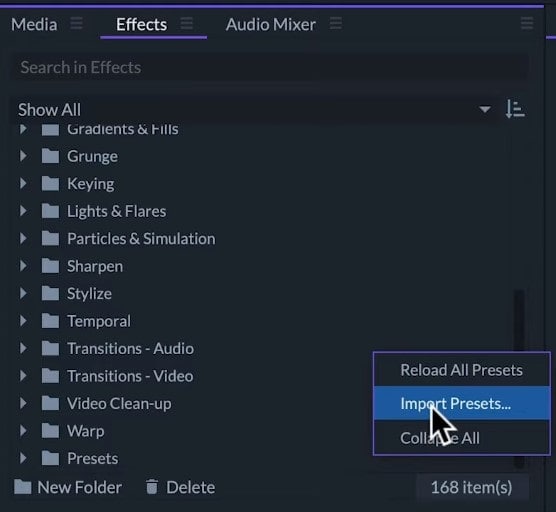 Here, we'll look for the "Transition Set-Up" file and open it. Now, if we apply this Preset in the small 10 frame section, this is what we'll get.

This preset will auto-adapt to any video size. The use of this preset is simple; if we zoom in to 300%, we can see that the video looks the same.

But if we scale it down, move, or rotate the clip, it will cover all the frames, and the edges are hard to identify because of the blending colors. So, this will give us a wide range of freedom for the transformations.

Notice that if we carefully compare the original video with the setup section and 300% scale, we can see that the quality is lower. So, we should only apply this setup where the transition takes place, so the decrease in quality is not visible. That's why we've separated those 10 frames in the first place.

Now, we'll proceed to create the transition itself. In this case, we want to make a rotation from this video to the next one. We'll set a keyframe on the rotation at the beginning of the clip. And then at the end of it, we'll set the value to 90°. 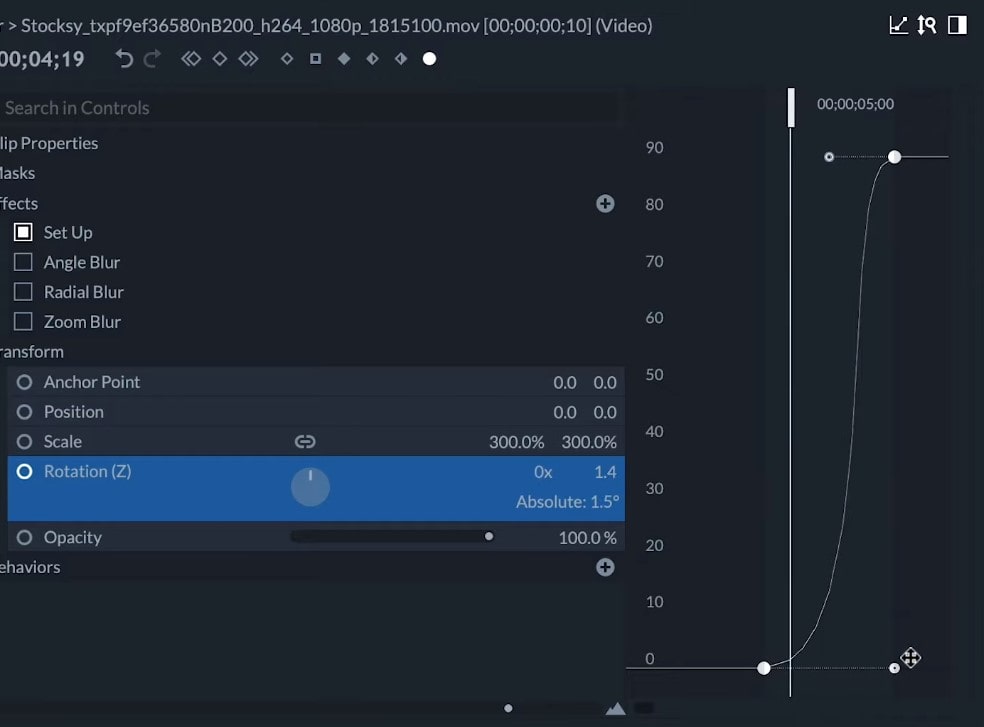 So, we'll apply some curves to this animation to smooth the beginning of the transition and speed up the end of it. To do this, we'll select both keyframes. Click on this white circle to convert them into Manual Bezier and click on the Display graph to edit them.

We'll hold Shift to keep the angle and pull the Bezier on the first keyframe to adjust the curve. And then, we'll compress the second Bezier to increase the speed at the end of the section to make sure that the transition will happen during the faster movement. This is how the video looks now. 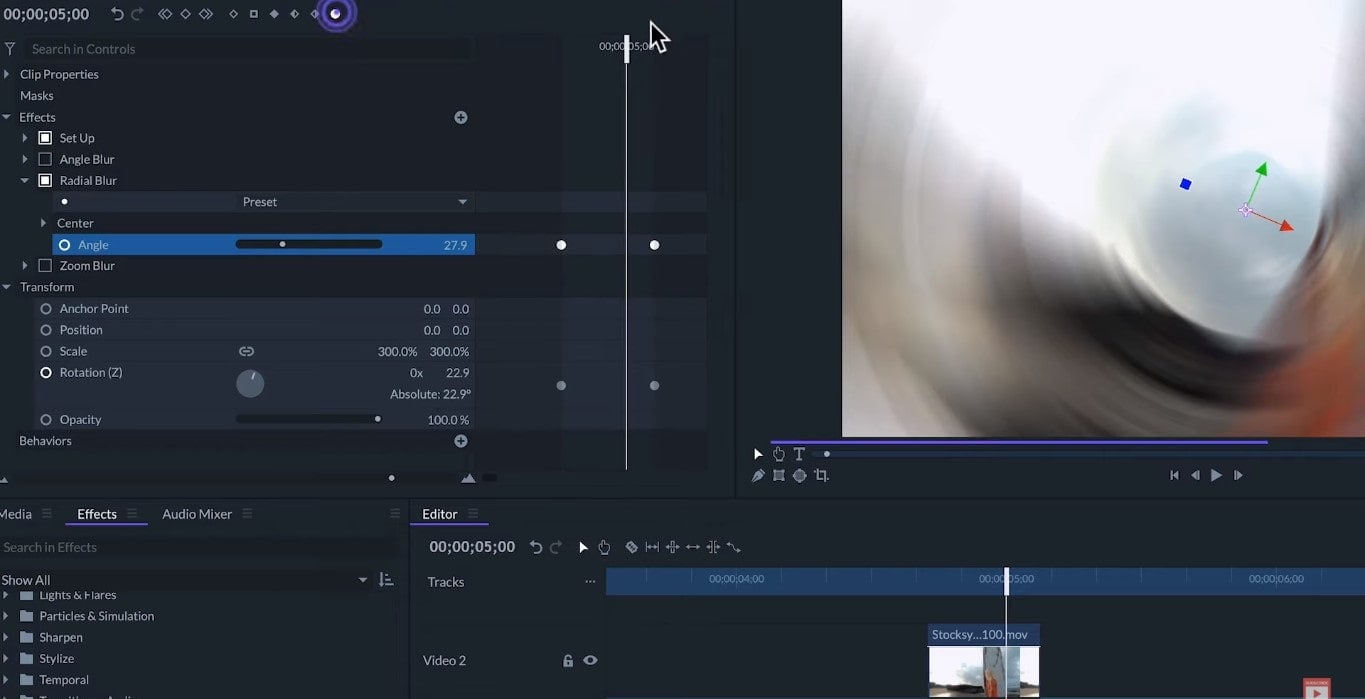 In this case, as the image is spinning, we'll use the Radial Blur and activate it. And animate its angle from 0 to 40. We'll make the keyframes line up with the rotation keyframes and apply the same curves. And this is what it looks like so far.

Now, we need to do the same on the opposite clip. We'll slice the first 10 frames, move it up, add the setup preset, and then set the scale to 300%. We'll animate the opposite rotation from -90 to 0. Activate the Radial Blur and animate the angle from 40 to zero. We'll correct all the curves as well. 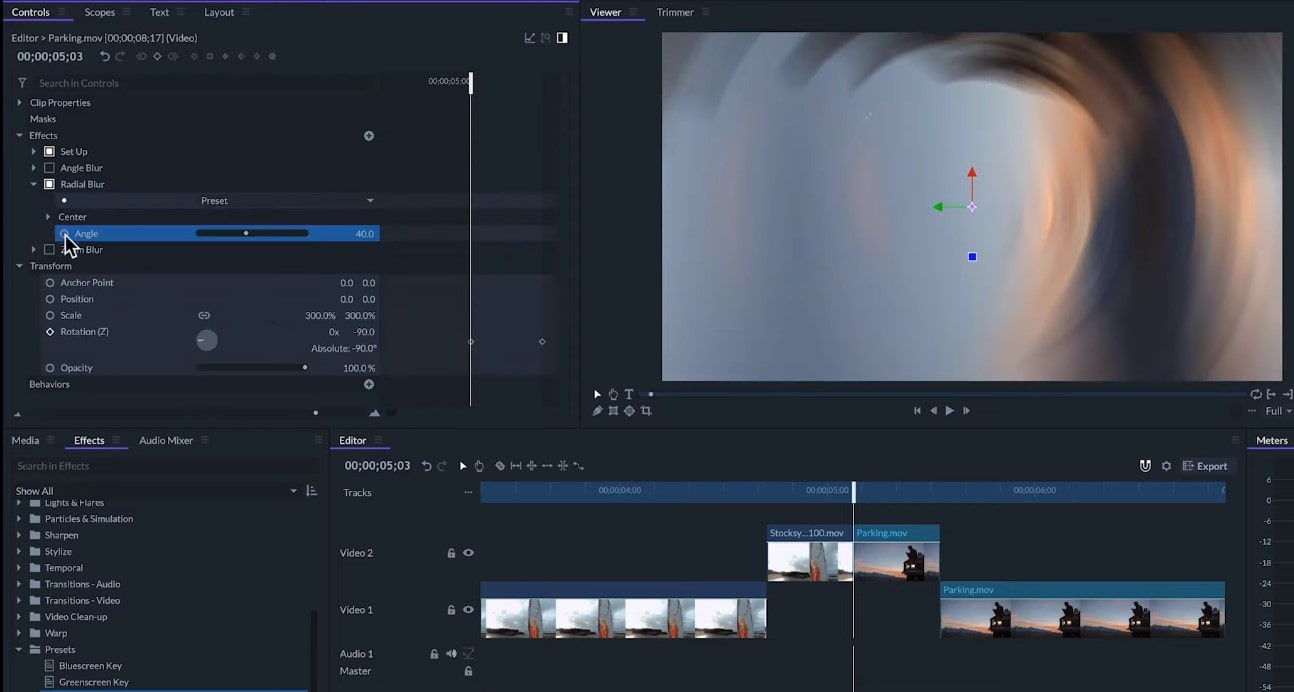 Take a look at the results in the video.

If we want to blend the transition, even more, we can add a cross-dissolve transition and shorten its duration. But this last step is up to you. So, here we have our smooth motion transitions. Now we can experiment and make variations of them.

Like moving the anchor point to a corner so that the clip spin from the side or animating the scale instead with a zoom blur or animating the position with an angle blur. We can even combine some of these movements.

Another type of cool transitions to try is seamless Transitions. This means adjusting the transitions, so one clip blends the best possible way with the next one. To compare, here are these two clips with the regular transition. But with the seamless transition, we can make a wave of the first video blend with the wave of the second video as if it were the same wave.

This is how it's done. 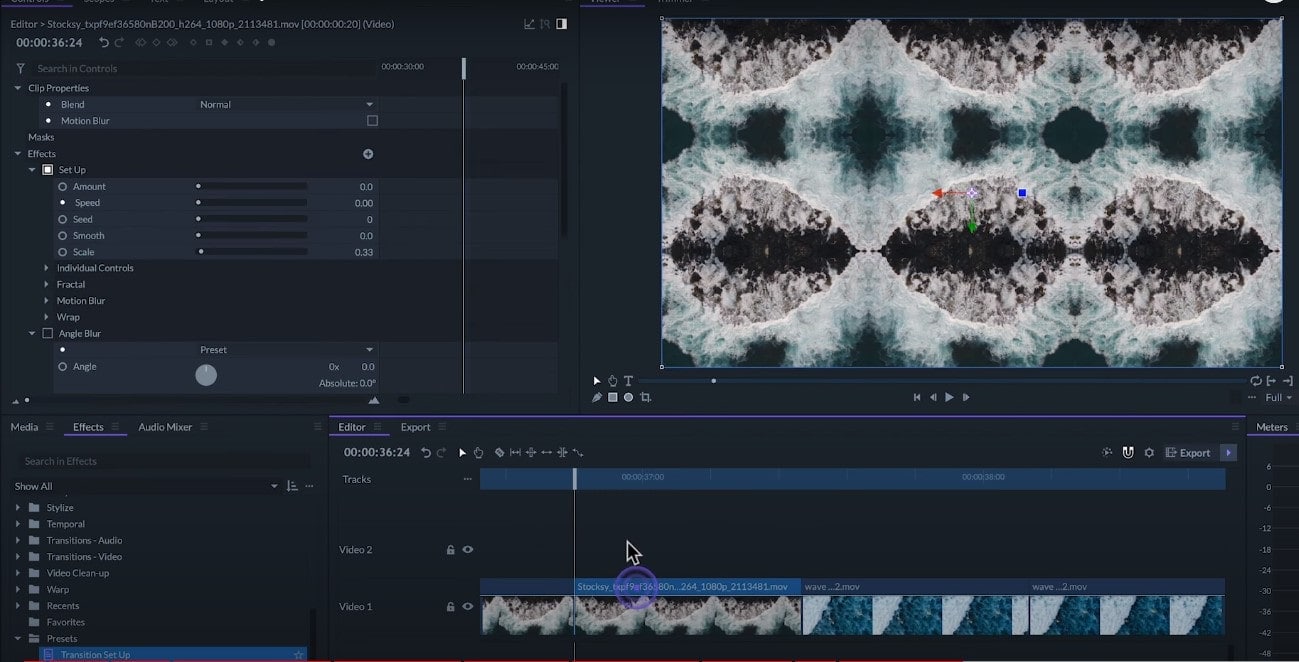 In this case, we decided to use 20 frames of each clip to make the transition slower. We applied the setup preset and changed the scales to 300%. Move the playhead to the beginning of the first section and adjust the anchor point, so it lines up with the edge of the wave. Then, adjust the position to put the image back in place. 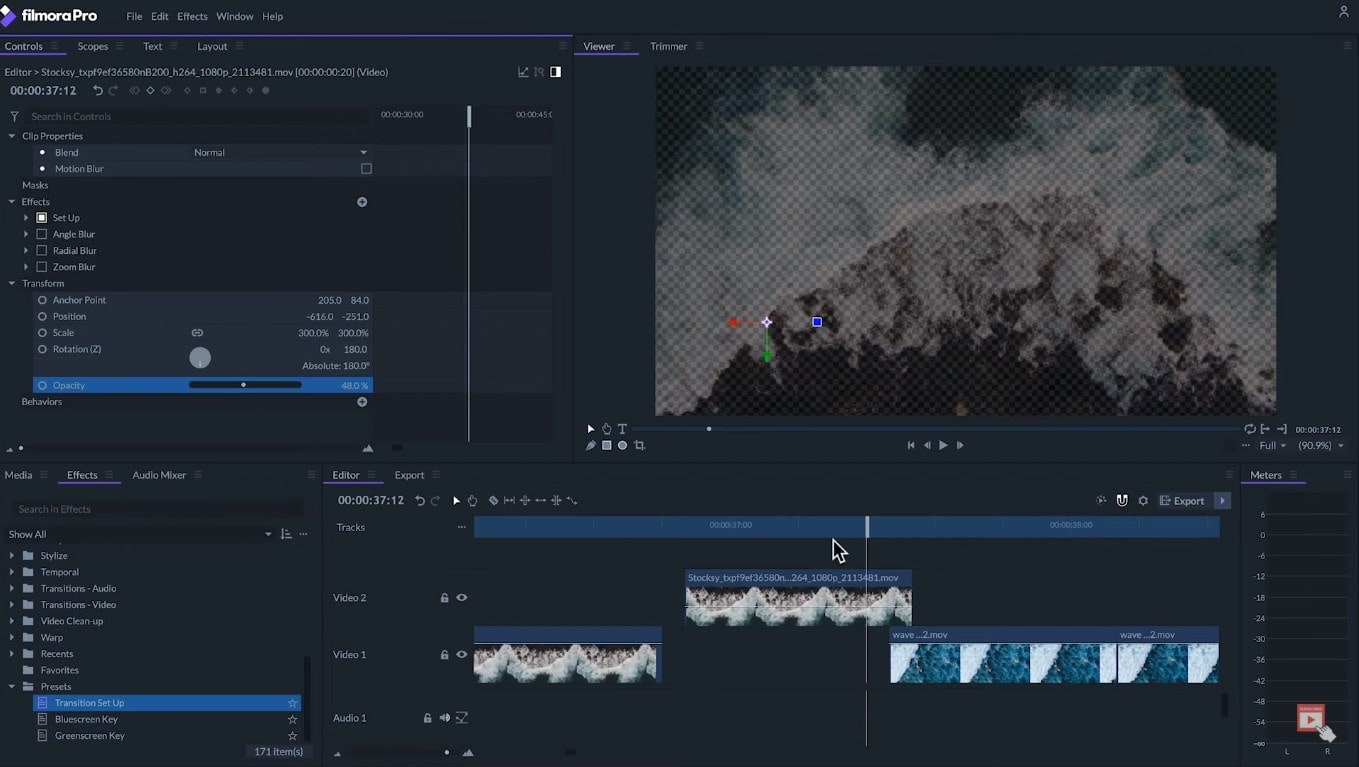 We did the same in the second section. After that, we moved the first section to the second track and overlapped the tips of both clips. Lower the opacity of the top clip to 50% for more precision and set the keyframes to scale and rotation on the first frame. After that, we moved the playhead to the end of the clips and aligned the wave to the top clip with the one on the bottom.

Select the bottom clip, add keyframes on the same values at the same frame, and at the beginning of it, align the bottom clip making sure there's enough movement for both clips.

Next, put back the clips into place, set the opacity to 100%, adjust all the curves in both clips, and check if the result is more convincing so far. As this transition is mostly zooming and slightly rotating, we'll use the Zoom Blur and a little of the Radial Blur.

As we've moved the anchor point at the start of the process, in both cases, we need to adjust the center of the effect. After that, all that's left is to adjust the curves and add a cross dissolve transition.

So, that's how to create Smooth Motion Transition between your clips with FilmoraPro. To learn more about editing in FilmoarPro, make sure to check out our other tutorials in the series. And remember, there is no limit to what you can make.