Many of us get the first association when Adobe After Effects is mentioned: stunning motion graphics and breathtaking visual effects. Very few people think of audio editing when they talk about AE, even though this application offers a simple way to add Fade in and fade out effects to audio files used in soundtracks.

However, you will need to have at least basic video and sound editing skills to fade in and fade out audio files in AE since the app doesn't offer a preset that you can drag and drop to the timeline. So, in this article, we will show how to create the Fade in and fade out effects in Adobe After Effects in just a few simple steps.

Read More to Get: Best Audio Mixer Software to Trim Your Sound Easily >>

Once you've created a new project in AE and you've imported the audio files you'd like to include in the soundtrack of the video you're making, you should place that audio file on the timeline. Click on the arrow located next to the audio file, then click on the Audio arrow that will be displayed under the file, and finally click on the Waveform arrow. This will enable you to see the waveform of the audio file you'd like to edit on the timeline and allow you to add Fade in and fade out effects with more precision. The file you added to your composition will be displayed as a layer in the Composition tab located in the lower-left region of the software's interface. 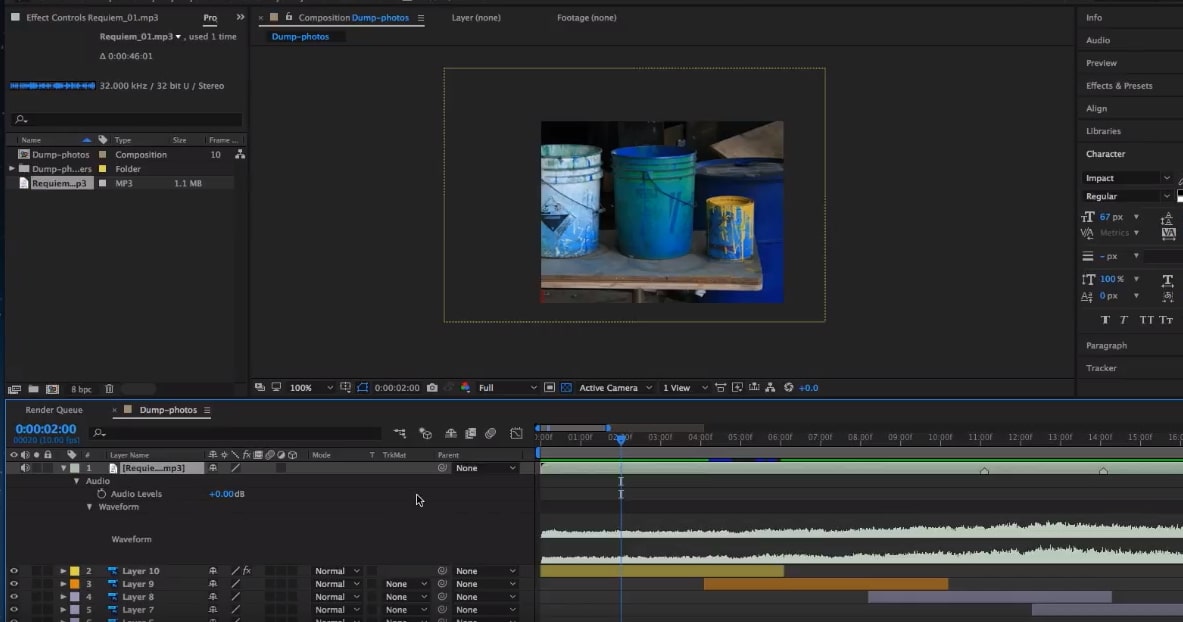 Step 2: Add a keyframe to the audio file

The next thing you will have to do is place the playhead at the exact location where you want the Fade In effect to start. In most cases, Fade effects are added at the starting point of the audio file, so you should position the playhead at the beginning of the timeline or zero seconds. You will be able to see a stopwatch next to the Audio Levels option located in the Composition tab. Click on it to add the first keyframe and assign a negative value to the Audio Level setting. -100db or -50db values will make the audio file silent, and you can pick either based on how long you want the Fade in effect to last. If you don't know how to use keyframes in After Effects, this article will give you some info.

You may also like: 15 Free After Effects Templates to Power up Your Video

Move the playhead to the location where you want the effect to end and add another keyframe by clicking on the 'Add or remove keyframe at current time' icon. Set the Audio Level value to 0db, and that is it. You've created the Fade in effect. Keep in mind that you can use more than two keyframes to fade in audio, enabling you to increase the audio level gradually. The process of creating the Fade effect requires you to add a keyframe that has a 0db value a few seconds before the clip ends and then add another keyframe at the very end of the audio file that has -50 or -100db audio level value. 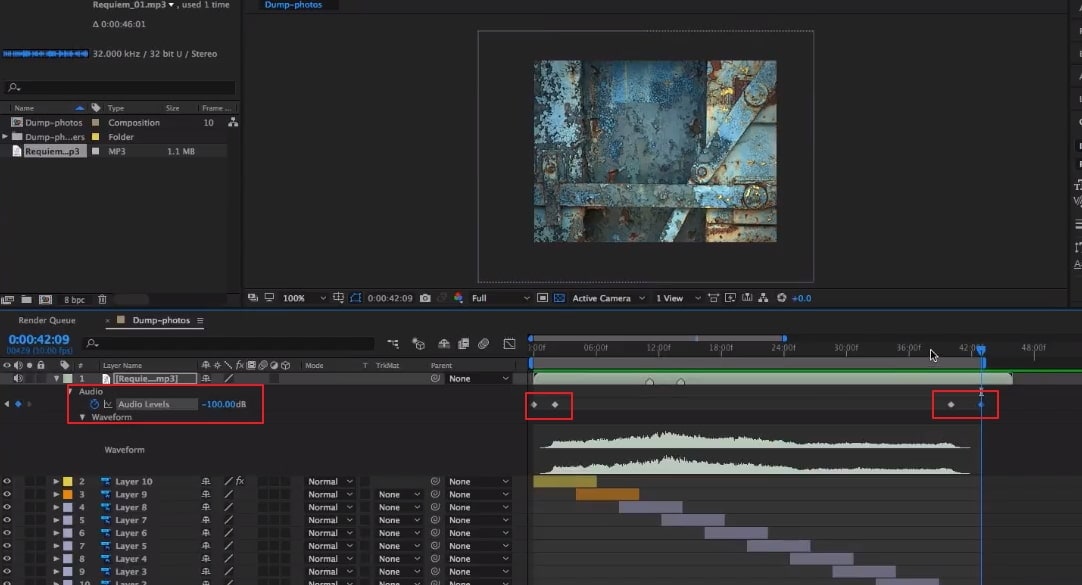 Tips For Making Better Fade In and Fade Out Effects

The process of creating a fade in or a fade out effect in AE is quite simple, but it is up to you to discover creative ways of using these effects. Here are a few tips that can help you use these audio effects more creatively.

A high pitch sound at the very begging of a new sequence can ruin your soundtrack and ultimately the entire video, so in case you've cut an audio file at the location where the sound peaks, you can apply a fade in effect to make the transition between two audio files softer.

You may also like: How to Cut Video in After Effects

2. Be Mindful of Audio Compression

Audio compression is a process that reduces loud sounds and amplifies quiet sounds, resulting from the audio file's dynamic range being compressed. In most cases, you won't notice the effects of audio compression, but if you compress an audio file too much, you might get some unwanted side effects if you add a fade out effect to that file. That's why it is best to rely on the default audio compression features a video or audio editing app offers.

3. Use the Fade In and Fade Out Effects Creatively

Besides opening and closing scenes, you can also use the Fade in and fade out effects to mix two different tracks while the shot is still in progress. Fade out one track, make it look like a scene is ending, and then introduce a new theme that changes the mood of that scene. The important thing is to avoid reducing the audio level all the way to -100db because you might end up creating silence in a scene that disrupts the flow of an entire video.

Fading in or fading out audio files in Adobe After Effects doesn't require much effort, as you have to add a few keyframes to the file and adjust the Audio Level value. However, finding the best way to improve the quality of your soundtrack by applying these effects may take some practice. Do you often add Fade in and fade out audio effects in AE? Leave a comment below and share your experiences with us.

If you want to fade in/out audio easily, we recommend using Filmora. It is designed for people who wish to edit professional videos with simple-to-use features. Besides Fade in/out audio in Filmora, you can automatically sync audio to video. Download it now to have a try (free)!