How to Choose Best Audio Formats

The quality of sound that you hear depends on various factors, and an appropriate audio format is one of them. While each type of acoustic file has its own significance, choosing the best audio format as per the target player, expected audience, and/or supporting videos or images (if any) is something that needs much consideration to offer a flawless listening experience.

With that said, here you will learn about some of the most common sound file types, which among them could be the best audio format according to your requirements, and a couple of important points that you must keep in might while picking an extension for your media preparations.

Wondershare Filmora is a simple yet robust video editing software that allows you to save a video to mp3 easily. Besides, if you want to remove background noise from audio, or change the audio volume or remove unwanted audio parts from the video, you should definitely try Filmora.

Before listing the most common audio file formats, it is important to understand the categories of the sound files. Every audio format that exists belongs to one (or more) category depending on the way it is being created and the characteristics it has.

In a nutshell, there are three major categories, including:

Below is a brief introduction of each of the classes listed above along with the audio file types that belong to them:

Uncompressed audio is the original sound that has been recorded directly from the source in the analog form, and then converted to a digital signal without any modifications or compressions. Because an uncompressed sound is prepared with no retouching or manipulations, it gives an as-is listening experience. Since no compression is done on such a file either, it occupies a remarkably huge amount of space on your storage media.

Some sound files that fall under this category include:

A PCM file is the digital version of an analog waveform that is created by recording the audio samples, technically known as pulses. The PCM format is mostly used when creating optical media discs, typically the CDs and DVDs.

Generally used on the Windows platform, this audio format is not a file itself but a container that may contain both compressed or uncompressed files. However, in most cases, it is the latter that a WAV file has, and PCM format is one of them.

AIFF is almost identical to WAV format in its characteristics with the only difference that, unlike the latter, it was developed by Apple somewhere in 1988, and works as a container for both compressed and uncompressed audio files. While the compressed version of the format is called AIFF-C, the term Apple Loop is used when the scenario is otherwise. As it is with WAV, even AIFF files mostly contain uncompressed audio, that usually is PCM.

You may also like: Best AIFF to MP3 Converters>>

Used by Sony and Phillips, DSD is also not a format itself but a container that can store PCM files to provide decent sound quality. However, due to distortions in the composed audio, DSD files are not much in trend.

Lossless Compressed audio format is a type of file that is compressed using some advanced methods without compromising with the quality of the sound. This means that when played, you experience the same acoustic excellence as that of the source, i.e. uncompressed audio. However, even though the lossless compressed files are comparatively small in size, they still occupy decent amount of space on the hard drive or any other storage media in use.

Some formats that fall under the lossless compressed category include:

At around half the size of the source sound file, FLAC offers the original audio quality without removing any acoustic information during compression. Being an opensource and royalty-free audio format, FLAC is even easier to get, and in most cases is used as an alternative to MP3.

Check some of the best FLAC editor programs>>

Introduced by Apple Inc. and initially released as a proprietary product, ALAC was made royalty-free and opensource in 2011. Even though ALAC files are larger in size when compared to FLAC, the former format is used in iTunes and iOS as the latter isn’t supported by these platforms.

These are the highly compressed files that occupy significantly less amount of space on your storage media. However, during the compression process, some acoustic information is lost in order to reduce the file size. Nevertheless, if compressed correctly, the deterioration in the quality is almost negligible, and cannot be experienced unless the listener is quite experienced and the source recording is played next to the compressed audio simultaneously.

Some audio formats that fall under the lossy compressed category include:

This is one of the most common file types and the best audio format for almost all media types that have sound. An MP3 file is free from the noises of the least significant in the composed audio. In addition, all the acoustic information with the frequency that normal human beings fail to catch (below 20Hz and above 20000Hz) is safely erased during compilation and compression. Furthermore, what makes MP3 the best audio file format is its ability to accommodate with almost all the devices of nearly any platform such as Android, Windows, iOS, Mac, etc.

Check this MP3 editor and convert video to MP3 easily.

Even though this format is way advanced than MP3 and offers better sound quality at the same bitrate and compression ratio, it is not as popular as its predecessor (MP3) among users. Nonetheless, AAC is the most preferred audio format for YouTube videos, iTunes, Android, iOS, etc.

This one, again, is not in fact an audio format but is a container for audio that generally stores Vorbis files. Although OGG files are way advanced in terms of sound quality and even offer higher compression ratio when compared with MP3 and AAC, they are not much in use as many platforms and devices don’t support the format till date.

AU is a format by Sun, DEC, and NeXT. It is yet another container that can hold both lossless and lossy files. AU files are mostly used in UNIX.

What's the difference between common audio file formats like MP3, AAC, WAV, and FLAC? Watch the video below to learn more.

If you are a media creator, and are into the business of preparing audio and video content for your clients or directly for the audience, it is imperative to understand what could be the best audio file format to compose the audiovisual files. Here are a few tips that you must keep in mind in this context before proceeding:

If the media type you are about to create is expected to be used for further editing before exporting to a different format, using an uncompressed audio format would be best as it offers a smooth and flawless post-production experience without giving much overhead to the processor.

If your audiences own highly sophisticated audio players with Hi-Fi speaker systems, and they are also good at recognizing and understanding the differences between poor and optimal audio quality, using lossless compressed audio format would be a good choice as it gives decent sound quality in smaller file size.

If you are preparing a media for home users and casual listeners, you can safely use an audio format that has been prepared using a higher compression ratio. In such a scenario, MP3 is the best audio format that not only offers the decent sound quality, it also occupies less amount of space on your storage media, thus enabling you to save more files at a given time.

At the time of this writing, YouTube supports two types of formats namely MPEG-2 and MPEG-4. Although both of these are video containers, they also hold audio files. Details about both these types are as follows:

Since many people nowadays produce videos in MP4 due to its wide range of supported devices and players and the fact that the container is used by majority of users worldwide, MPEG-4 with AAC audio format could be mostly seen on YouTube.

Being one of the most versatile post-production tools preferred by many professional editors worldwide, Filmora comes with a variety of audio formats from all the three categories discussed above. Furthermore, Filmora also displays relevant information about each of the file types it offers. 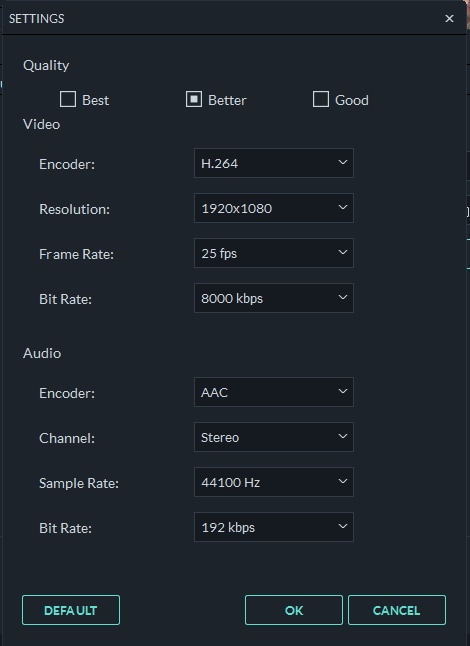 The following table shows a list of formats and the details that Filmora supports: