In this tutorial, we'll learn about some of the Grunge Effects in FilmoraPro. These effects will give an old or damaged aesthetic to our clips.

FilmoraPro has three different effects to create these small imperfections on the surface of the clips. Film Grain effect generates a realistic grain on top of our clip. Similar to the effect you get when movies are shot on film. By default, this effect is subtle. So, it's better to have the viewer on full quality with a big scale to see it. 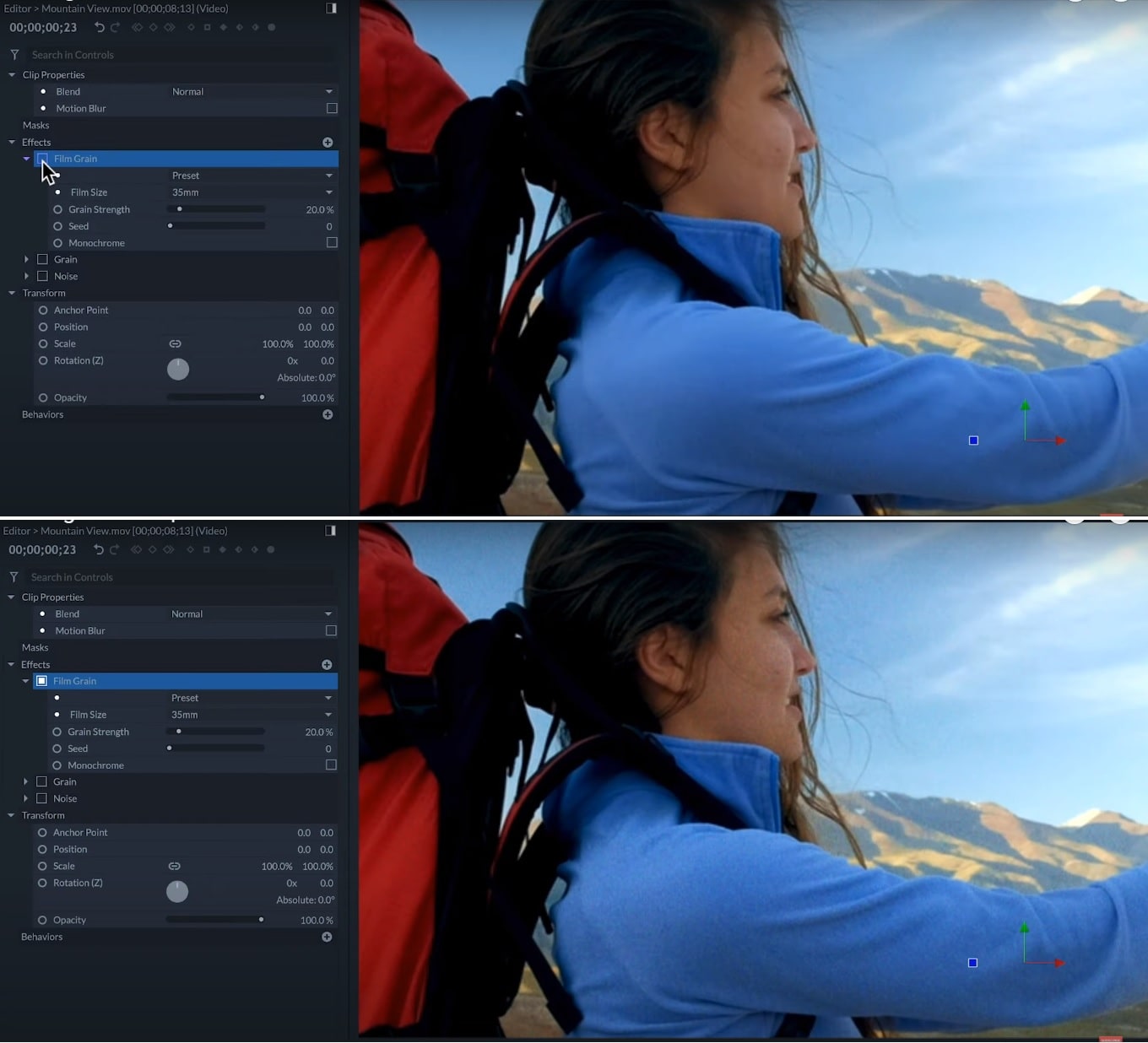 The Film Size will emulate the appearance of grain in different film stocks. And we can also adjust the strength of the grain. Or select one of the available presets.

The Grain effect generates the same kind of grain, but the controls are more flexible and less automatic. The amount of noise acts as the strength of the grain. But it can go much further than Film Grain, and we can manually change the size of the grain. 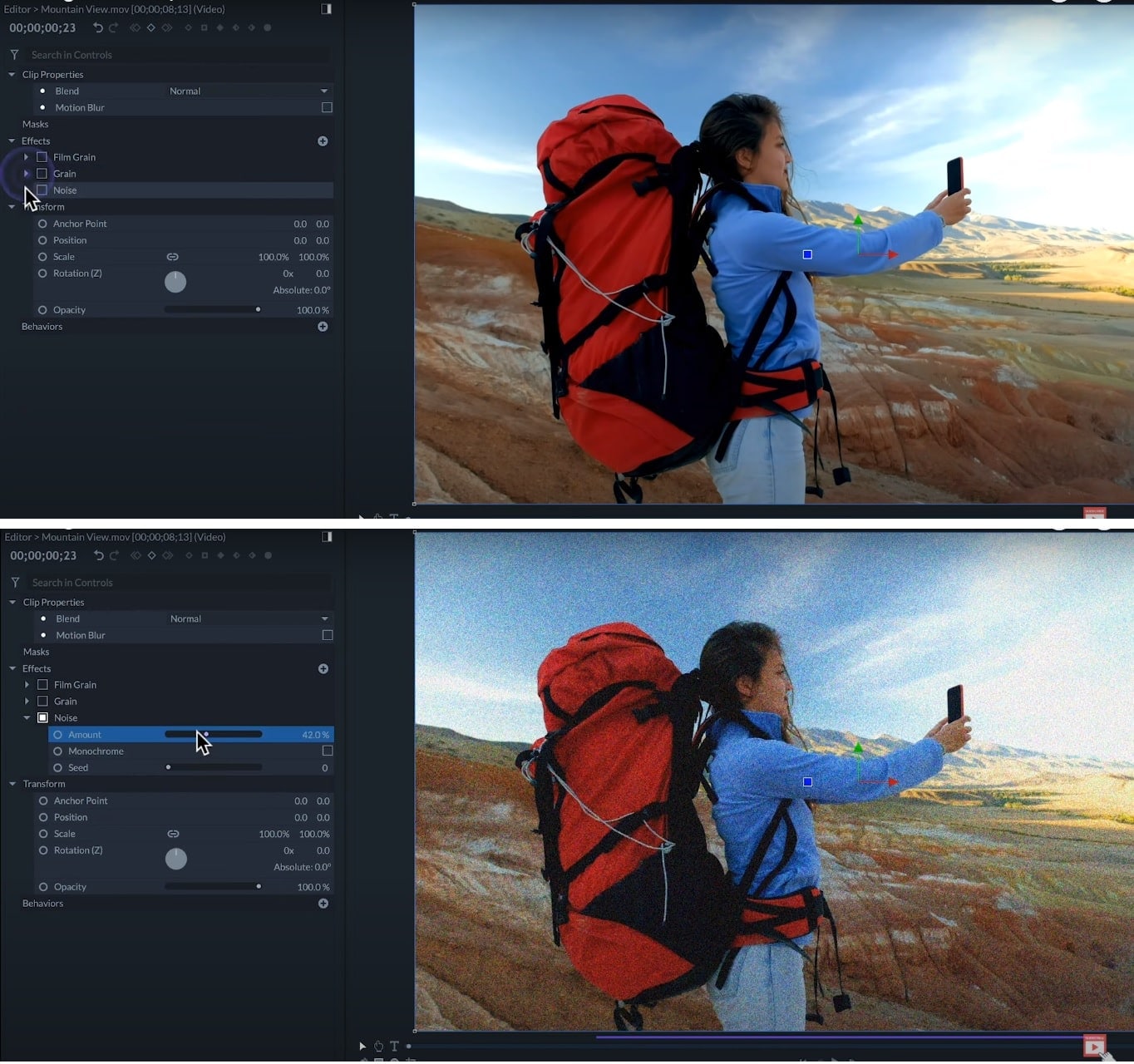 The noise effect instead generates a pixelated kind of grain, like the type of grain that's produced by Digital Cameras. In all these effects, we prefer to check the "Monochrome" box as we find the results more realistic. But that's up to you! 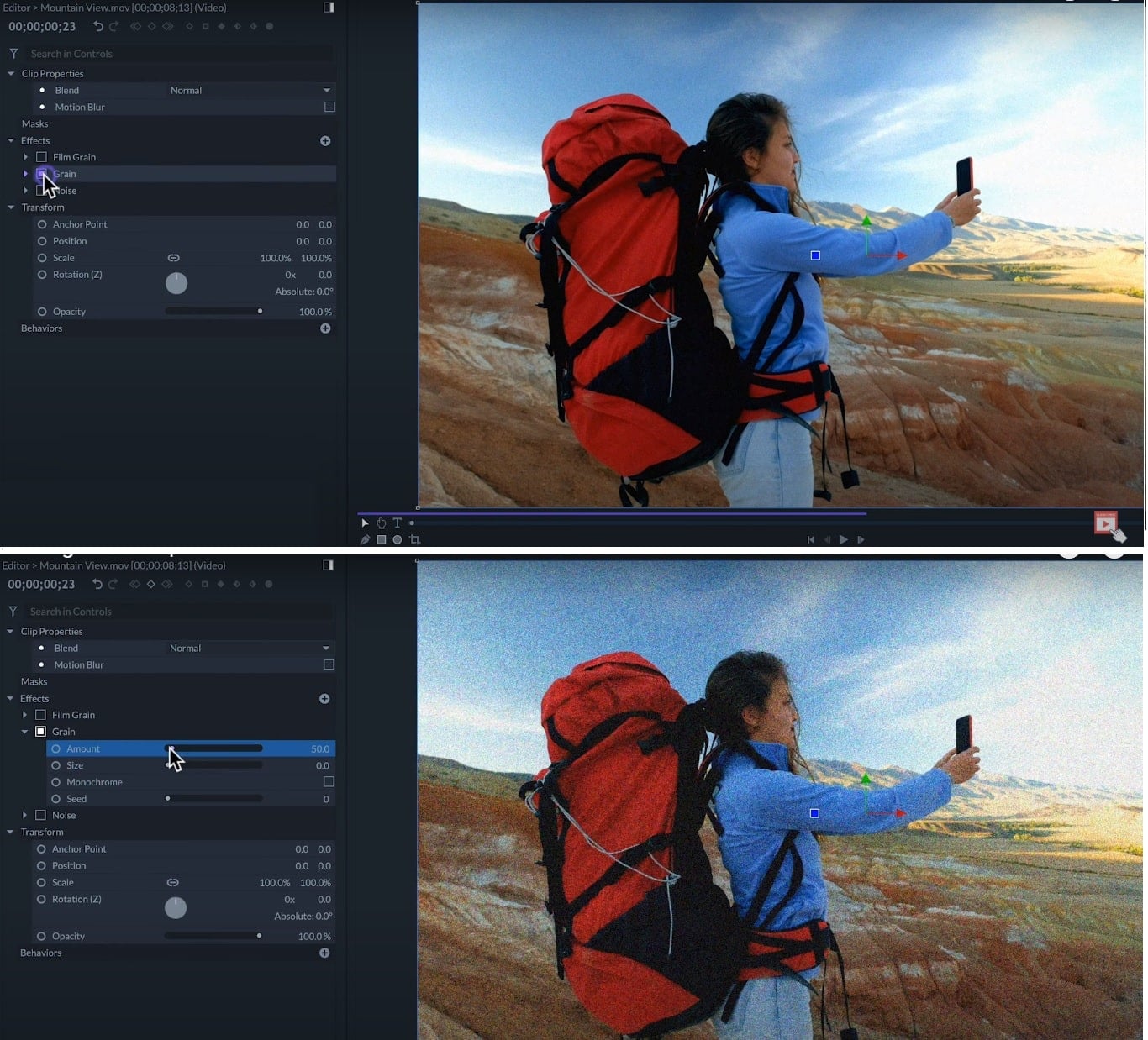 Give a Unique Look to Your Video Clips

The Halftone effect is a technique created for single color printing systems such as Offset, where each primary color is printed in a layer as a grid of dots. This grid from a further distance is visible as the full range of colors. FilmoraPro includes two different effects that emulate this printed look on your videos. 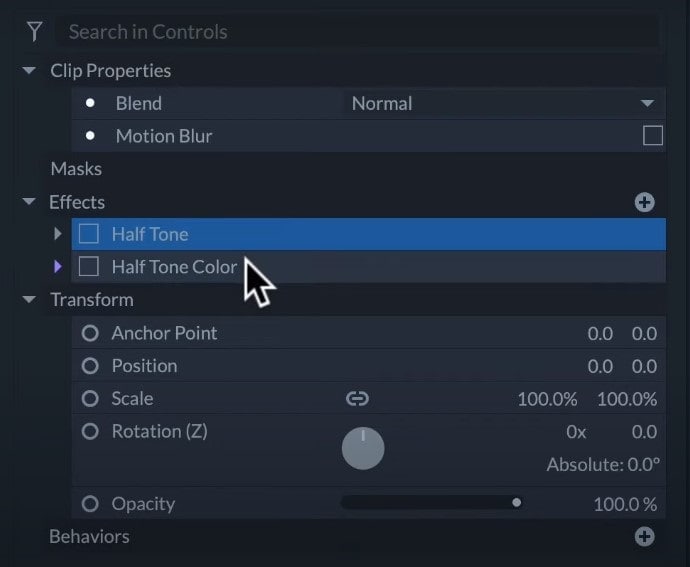 The Regular Half Tone Effect by default is Black & White and looks like a classic newspaper printing, although we can change its color if we want. The resolution will change the size of the dots, and the image will be more or less clear.

The Half Tone Color effect by default is made by cyan magenta and yellow dots. With a higher resolution, it looks like a printed magazine. A lower resolution looks more like a 90s comic book. If we set the angle to zero, the type to RGB, and lower the resolution and offset, the image will look more like an LED display. Of course, we can also experiment to create completely different results.

The Jitter effect will shuffle the order of the frames to create glitches in the video playback. The Frame Group Size slider lets us adjust the frequency of the jitter. A lower value generates constant jitter, while high value makes it more sporadic. We can also adjust the amount of jittering and change the pattern. 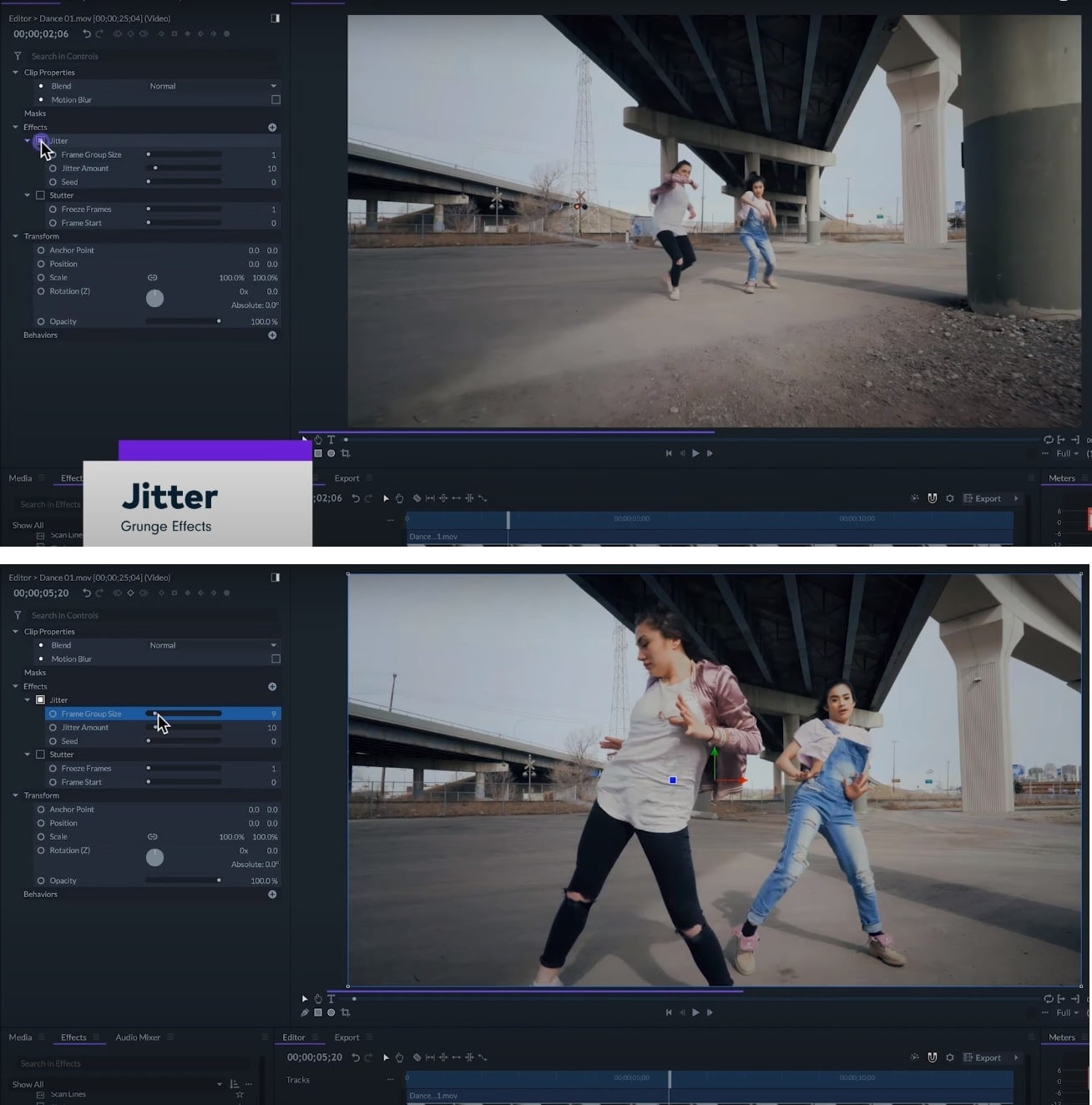 The Stutter Effect instead lowers the number of frames and makes the video look like its freezing. Freeze Frames slider sets how many frames will be subtracted from the original amount. Frame Start determines in which frame the effect will start.

For Example, if we have a 24 FPS video and we want it to play as a 12 FPS film, we can apply this effect and set the Freeze Frames value to 2.

The Scan Lines Effect refers to the horizontal lines of pixels in raster scanning produced by old cathode TVs and monitors. We can adjust the size of the lines, sharpness, and direction. We can also shift the lines by channel Red, Green, or Blue. 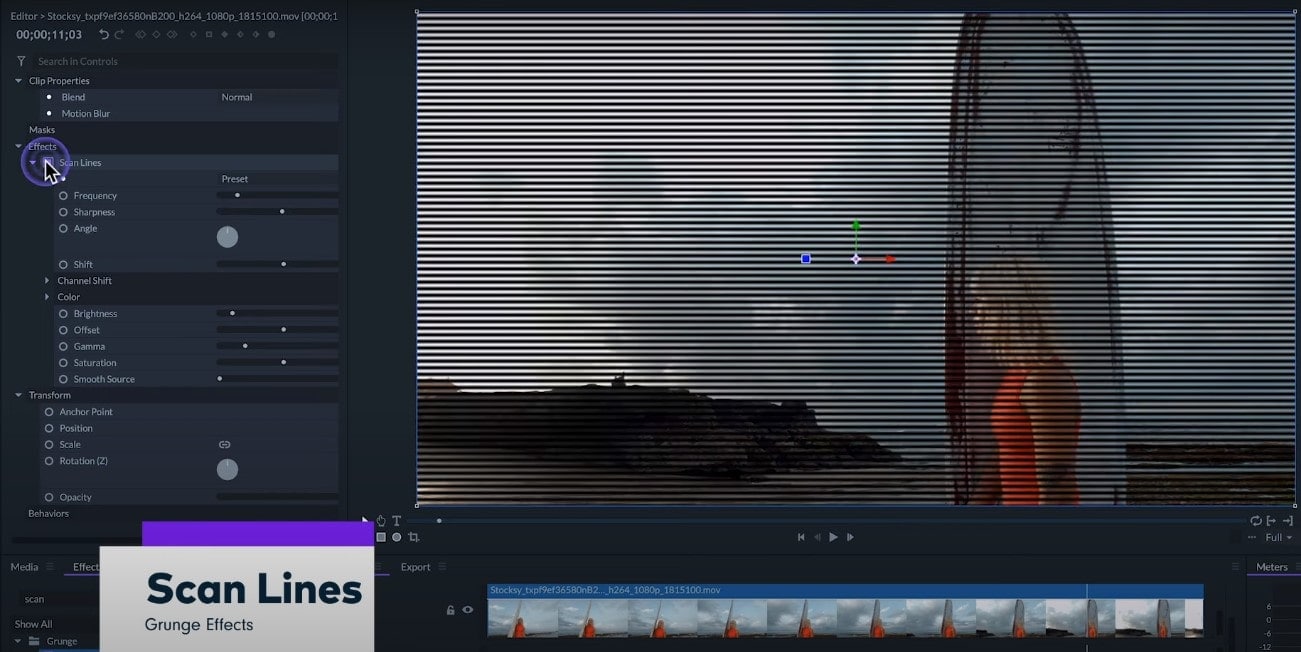 The Shake Effect will move the position and rotation of the image to simulate a camera shake. This effect has a ton of adjustable parameters.

In the video, the smoothness of the movement is increased to make it look less mechanical. We can control how much the clip will rotate, move vertically, and horizontally with the sliders under Individual Controls.

The Fractal Slider will add complexity to the shake movements. And we usually add a custom Motion Blur to make the result more realistic. If you want to know more about simulating Camera Movements, there is a video about that linked in the description.

Final Touch to Reach the Level of Perfection

To finish this video, we'll show you a bonus effect that is not in the Grunge Folder, but the Channel Folder.

Chromatic Aberration is an optical problem that occurs with some camera lenses. It generates some color fringing on the edges of the image. This effect simulates the situation by slightly shifting the channels. We can adjust the strength of the shifting, which channels will shift, and their direction. If we activate the "Use Lens" option, the shifting will occur around a central circle as it happens with lenses.

So, that's an overview of grunge effects in FilmoraPro. To learn more about editing in FilmoraPro, make sure to check out our other tutorials in the series. And remember, there is no limit to what you can make.