In this tutorial, we'll do an overview of the Stylize Effects. These effects are meant to apply dramatic visuals aesthetics to the clips. We'll see each one of them and some of their interesting uses.

The Cartoon Effect will smooth colors and create lines over the edges to create a drawn aesthetic. It has a lot of parameters to adjust the style of the cartoon that we want to create as well as some presets. 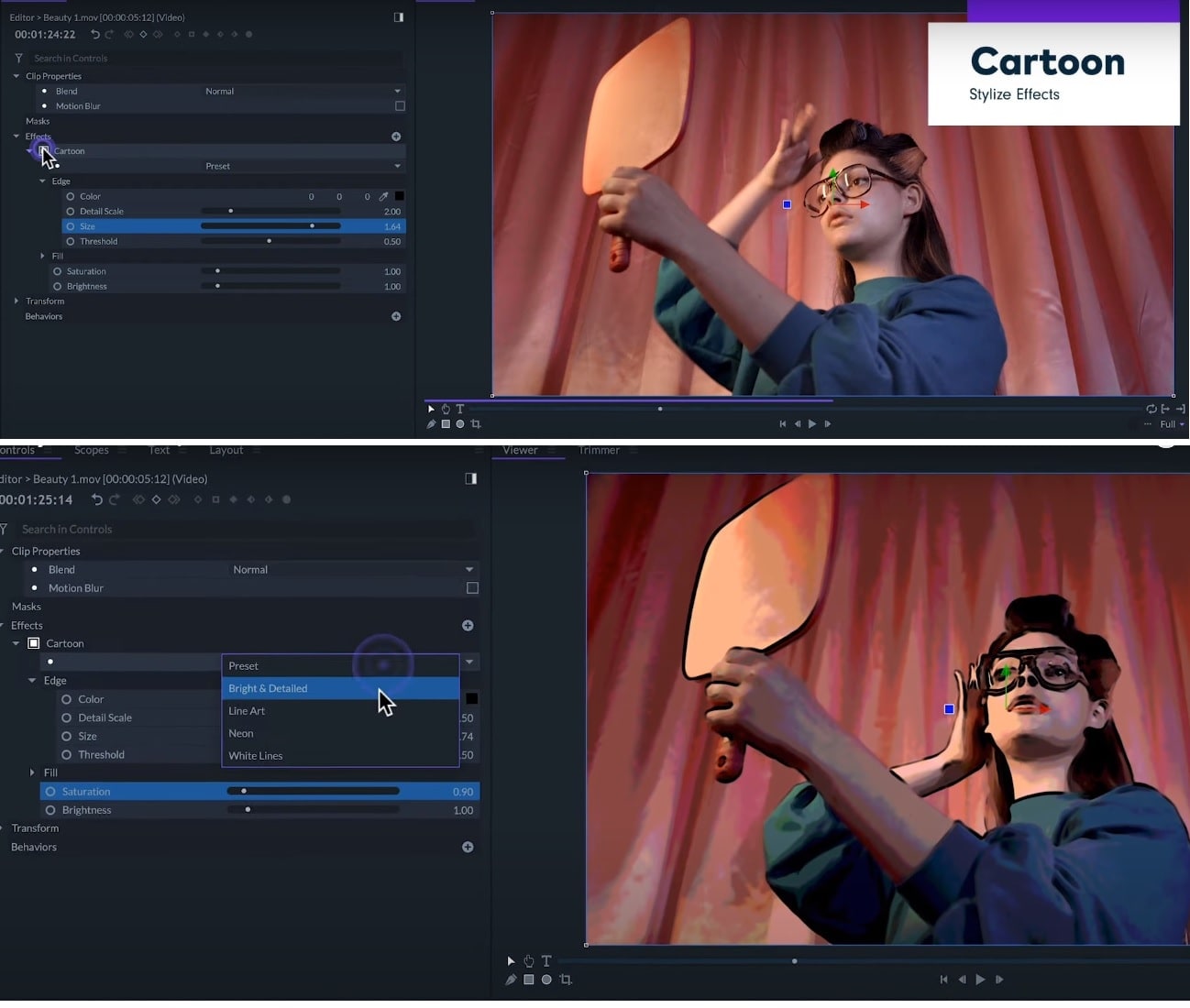 In this example, we've animated its value and added four more videos on top with the same effect. And a push transition to create this comic style transition. 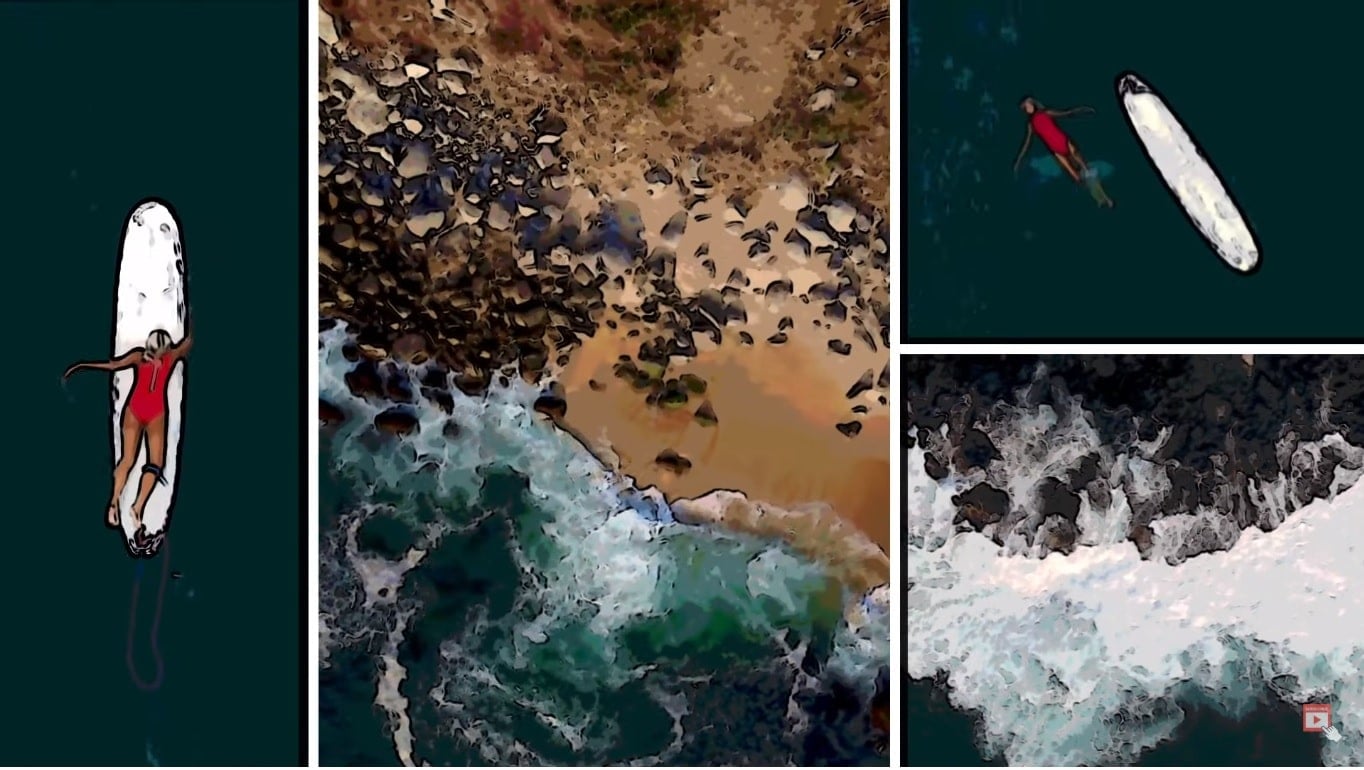 The Emboss Effect will create a look of a clay imprinted image. It detects the edges of the image and adds brightness and shadows to them, all on a gray background. It keeps some color on those edges. We can adjust the contrast to select how much the edges are affected. But if we want to tweak it even more precisely, we can add other effects before this one.

For this example, if we don't want the texture to be shown in the area of the sky, we can add Curves effect above the Emboss effect. And now, we can adjust it until we get the desired results.

If we want to get rid of the colors on the edges, we can use the Hue Saturation and Lightness effect to reduce the Master Saturation. We rarely use this effect by itself, but we can use it to apply a texture to another video.

For example, here we have this logo animation. We can apply it to the top of this footage of the wall. Add the Emboss effect and change the Blend Mode to Overlay. This way, it will look like the logo is a texture on the wall. It can also work as a watermark. By inverting the direction, we can make the texture look like it is inward or outward.

The Find Edges Effect will leave only the edges of an image in a light color and turn everything else black. We can invert these colors in the Controls Panel. And again, we can add Curves to select which edges will be visible or saturation and get rid of those colors. We can also add the Hue Coloring effect after the Find Edges effect to choose the colors of the lines. If we apply this clip on top of another one with the Screen Blending Mode, the background will turn transparent. 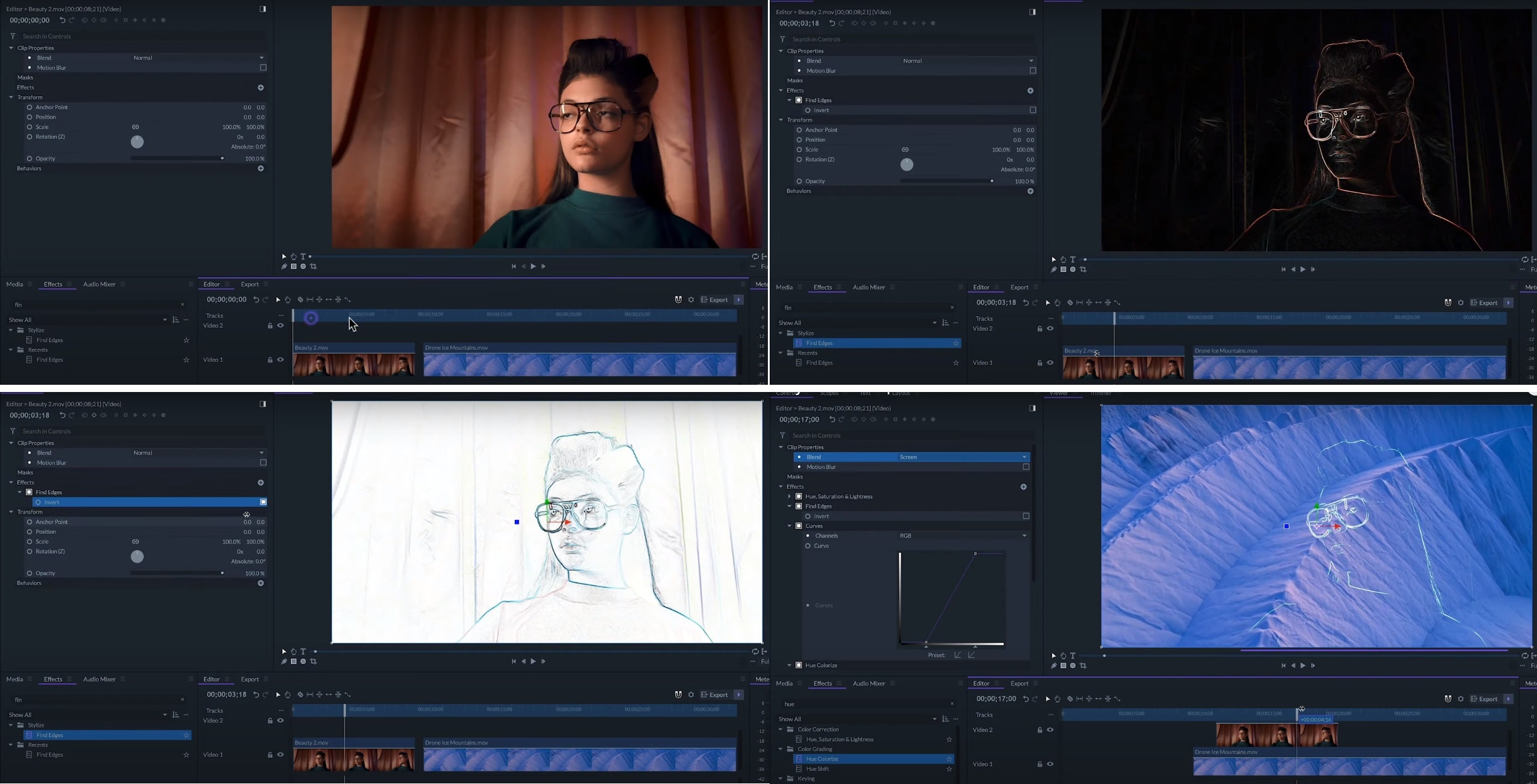 We've copied the same clip in two tracks, then applied these effects on top and some wipe transitions to both clips to create this intro scene.

If our main subject has the lightest colors on the scene, this effect can turn everything else into darkness, even in a daylight scene, like in the picture below.

The Leave Color effect is a classic process of photo manipulation, also known as Selective Color. This effect will turn the entire image into grayscale except for the areas of the color that we select with the eyedropper. We can adjust how the effect will calculate the color or invert it to take only the selected color out. This aesthetic has been used in several music videos and even movies. It drives the viewer's attention to the colored area and isolates the subject.

The Oil Painting effect simulates a painting effect on each frame. The Radius affects the size of the stroke, and Levels increases or reduces the numbers of colors on the gradient.

The Photorama effect will apply a texture like with damaged photography onto our clip. There are four different styles of textures, and we can animate the Seed value to give motion to this texture.

The Posterize effect reduces color details to create blocks of color instead of a gradual shift between tones. It has a lot of different settings to try.

In this example, we've reduced the colors per channel and the smoothness. Then we combined it with a Mosaic and the Stutter effect to create an 8-bit video game look.

The Solarize effect partially inverts the tones of the image. The threshold slider adjusts how much the image gets inverted. As this effect is commonly used on grayscale images, we can directly lower the saturation here, or we can invert the threshold.

The Threshold effect reduces the image of two colors only, without any gradients. By default, it's black and white, but we can choose the colors that we want.

The last effect is the Tint effect that will shift the darker and lighter areas of the two colors that we choose. We should choose one color for the blacks and one for the whites. And shift the amount of tint to select how much the effect will be applied to our clip.

So, that's an overview of the Stylize Effects. To learn more about editing in FilmoraPro, make sure to check out the other tutorials in this series. And remember, there is no limit to what you can make.