How to Record VR Gameplay

There is a steady shift in the gaming world from 2D games to VR games. Virtual reality makes the gameplay interesting by involving the real-life aspects. The scope of VR games in the gaming community is absolutely immensely and it is currently at its starting phase. If you are into VR games, you should record VR gameplay and upload on online platforms to get first mover advantage.

You cannot use any gameplay recorder to capture VR gameplay because most of them are not compatible. You have to select the best VR recording software so that the output quality is top-notch so that the viewers love it. In this article, we will illustrate all the best ways on how to record VR gameplay in simple steps.

Wondershare Filmora video recorder is best VR recording software available. You can record virtual reality gameplay as well as edit the recorded gameplay before uploading on any online platform. You can record high resolution and frame rate video so that everything gets captured with full detail. The editing options are ample for professional-quality video making that everyone will appreciate and make your video stand tall above all. Here are the steps on how to record VR gameplay with Wondershare Filmora.

Step 3: Select recording screen dimensions and you can also turn on microphone to record your commentary. 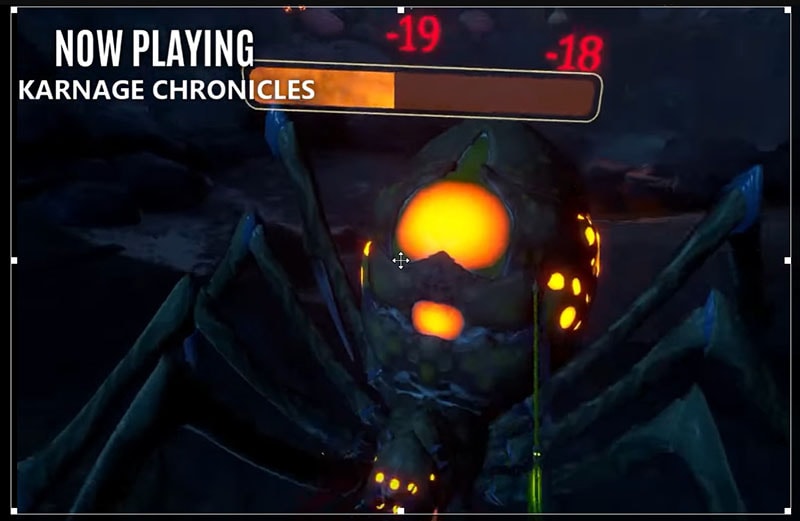 Step 4: Click on the Record button and you will get a few seconds to start playing VR game before recording starts. 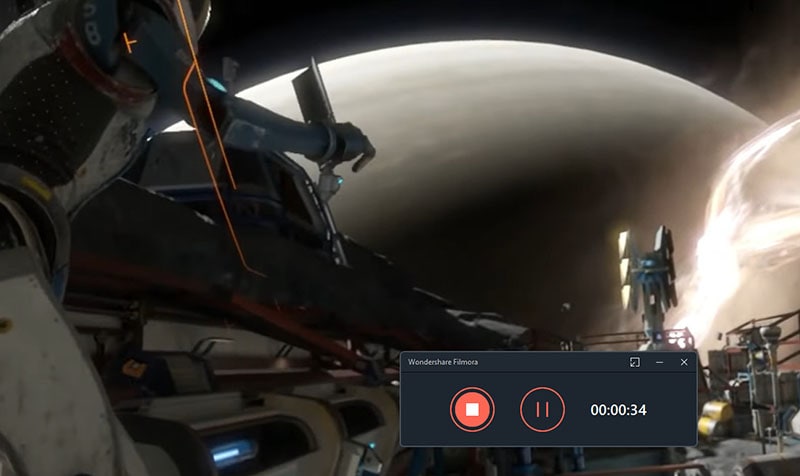 Step 5: Press F9 on your keyboard to stop recording and then you can edit the recorded video and export it to publish online.

If you are playing VR games on Steam platform, you can record virtual reality gameplay for free. There are multiple ways available on Steam platform to record VR games and the best way is through VRCapture. You can download the app for free from Steam Store. You can start recording your VR gameplay instantly with a hotkey and there are standard customization and configuration options available. Here are the steps to record your gameplay with this Steam VR recorder. 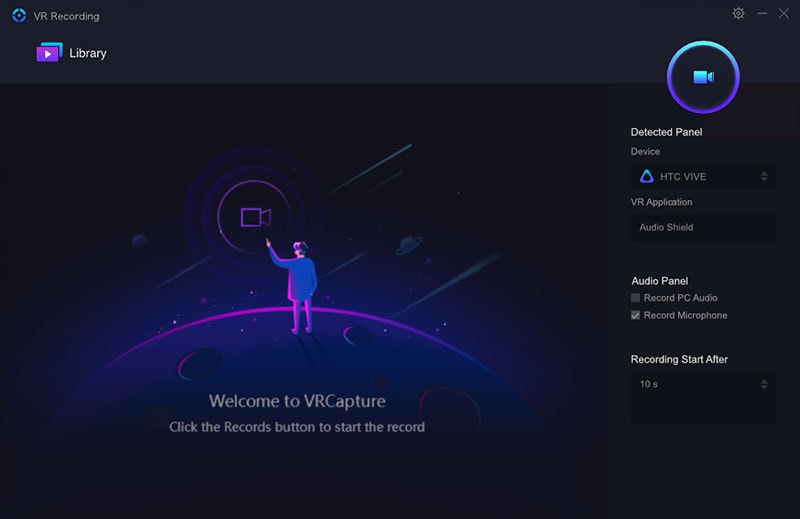 Step 3: After you open VRcapture, you can open VR game to prepare the screen.

Step 4: To start recording, you can either click on Recording option or press Ctrl+F12 keys. You will get a few buffer seconds to switch to VR game and start recording.

You can share the recorded video on YouTube. It is compatible with HTC Vive, Oculus Rift CV1 and DK2.

OBS Studio is an extremely popular software that gamers use to broadcast live stream of their gameplay on YouTube, Facebook and Twitch. The software is equally popular as a gameplay recorder. In fact, it is a great and free VR game recorder through which you can record your VR games flawlessly. You can record gameplay as well as game audio as well as microphone audio. The user interface is slightly complicated but here are the steps through which you can record your VR gameplay. 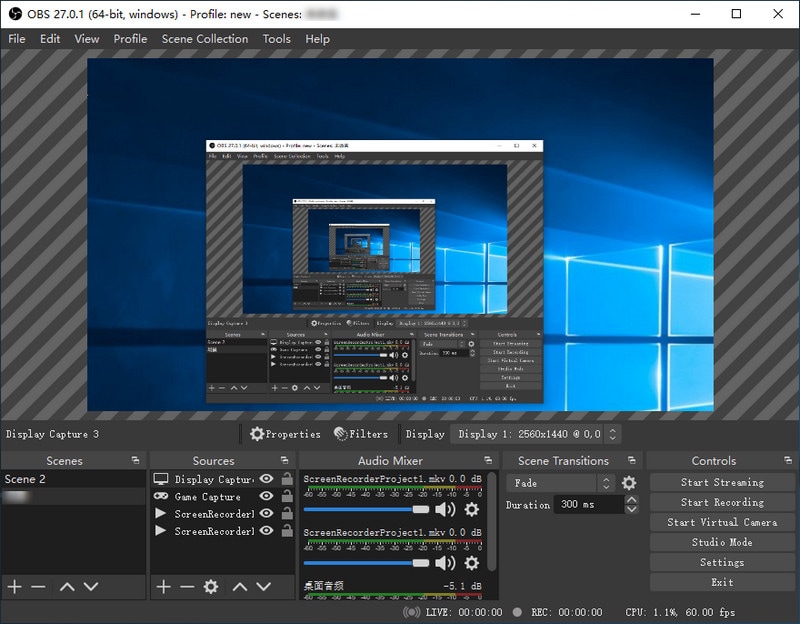 Step 2: Under Scenes tab, click on “+” button to create a new scene.

Step 5: Once your game is over, click on Stop Recording option under Controls tab.

You will find the recorded VR game video under Videos folder on your computer.

There is no doubt that playing VR games is more fun on gaming consoles than on computers. When you are playing VR games with your VR headset, it feels more natural to play the game from a gaming console rather than playing from a keyboard. If you use PlayStation 4 as your VR console, you can use the built-in recording option on PS4 to record virtual reality gameplay. Here are the steps you need to follow minutely. 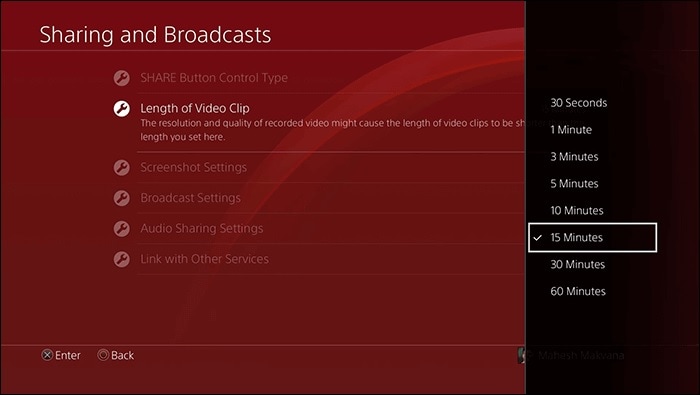 Step 1: Turn on your PS4 and press the Share button.

Step 3: Now, you should select the length of your gameplay recording as per requirement. You can choose from 30 seconds to an hour.

Step 4: Go to Audio Sharing Settings and turn on “Include Mic Audio in Video Clips” option.

Step 5: Open your VR game and start playing it. Press Share button on PS4 twice to start recording in the background. The recording will go on as per the duration you set in Step 3.

You will find the recorded clips under Capture Gallery option.

If you have a gaming computer and you are using Nvidia graphic card, you can record VR games using VR game recorder ShadowPlay. It is important to note that ShadowPlay can only be used if you have Nvidia graphic card. Recording virtual reality gameplay with ShadowPlay is super simple. When you install graphic driver, Nvidia Geforce Experience gets automatically installed. You have to turn on ShadowPlay to capture VR gameplay. Here are the steps you have to follow minutely. 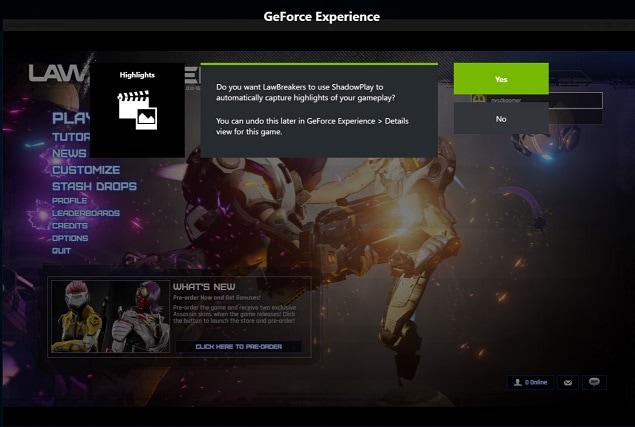 Step 2: Click on ShadowPlay and flip the switch to turn it on.

We have stated all the possible ways on how to record VR gameplay so that you can leave a long-lasting impression with your uploads on online platforms. Steam VR game players, PS4 users and Nvidia graphic card users can use their respective gameplay recorders. OBS Studio is a free platform VR gameplay recording but the best software is Filmora to capture VR gameplay and edit it like a pro.