This guide shows how to apply a 3D LUT to your video. A Look-Up Table (LUT) is a file containing math instructions to replace a color with another one. It's similar to a color grading preset. Applying a 3D LUT can change the color scheme of an original video and makes the entire video the same look. You can make your video look like a film and increase its quality in this way.

Here is a guide to applying 3D LUT features to your video in Filmora.

Step 1: Add a video clip to the application

Launch the application on your computer. Then, import the media as prompts and drag it to the timeline.

Select the video in the timeline, then click Color in the property panel on the right side of the screen. Click 3D LUT in the Drop Down List in the Basic> Preset tab. Click Ok when you are done. 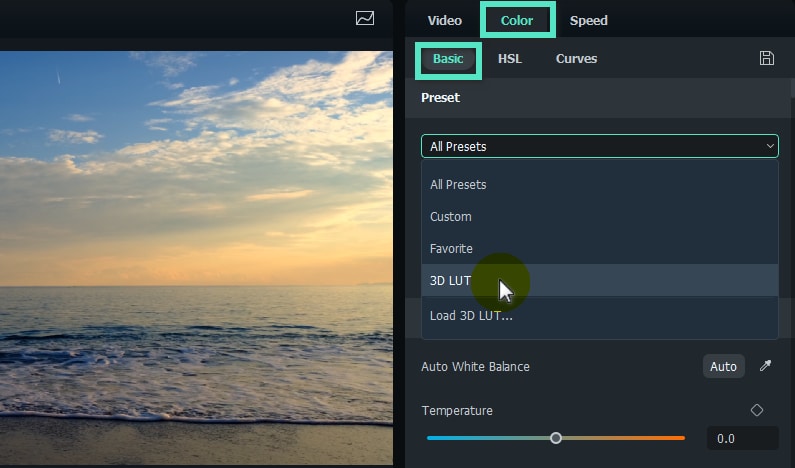 There are 16 effects built into the system for you to choose from. Click and preview whatever you like to apply, such as 007 Series, B&W Film, Batman, Cool Film, Dark Film, Game of Thrones, Gravity, Harry Porter, House of Cards, Mission Impossible, Reign, Sparta 300, Star Wards, Walking Dead, Warm Film, or Cyberpunk 1. Alternatively, you can add your 3D LUT as a preset by clicking Load LUT.

To remove the 3D LUT feature, you need to go back to the property panel. Under the 3D LUT section, select None to clear the settings.